11 pics of messages strangers left on New York's subway walls after the election. 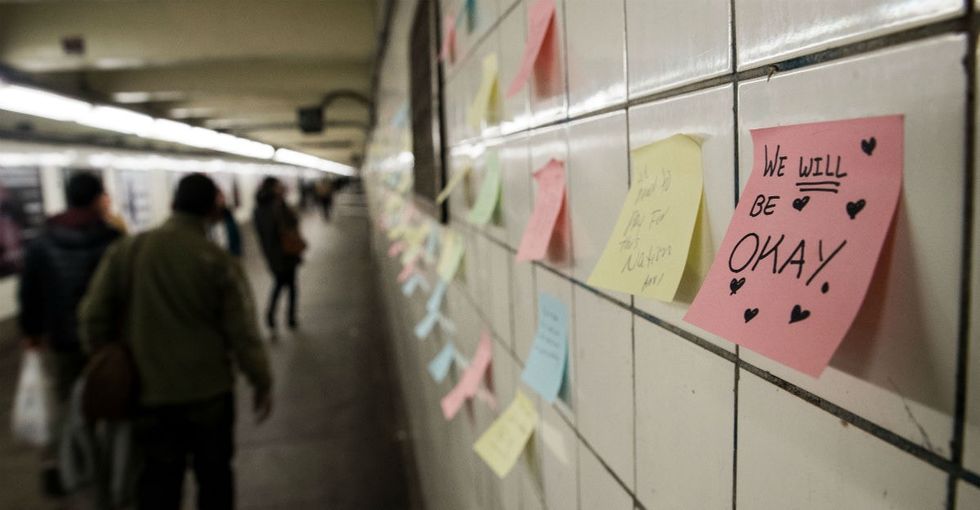 Donald Trump won the presidential election. And in the 48 hours since, many of us have grappled with a wide range of overwhelming questions.

How could this happen? How will my family be affected? Will my rights be taken away?

For some, our knee-jerk response is to act. We run to protest. We reach for the megaphone. We tweet until we're blue in the face. And that's great — we need people on the front lines.

But for many of us, we need to be OK ourselves before we can act. We need inner peace. We need focus. We need time. And that's where Subway Therapy comes in.

He usually sets up shop underground with a table and two chairs — one for him, and another for any stranger to sit down and chat about whatever's on their mind.

Chavez thought his services would be especially helpful in the aftermath of a divisive election that left many feeling anxious, scared, and confounded.

He pulled out his table and chairs, like usual, but decided to go a step further this time, bringing Post-it notes and some pens for folks to express themselves in writing and stick their notes to the tiled wall.

The idea took off.

About 1,500 notes were left posted to the walls of New York's underground.

"Your hijab is beautiful," wrote one person in a clear sign of unity with our Muslim friends and neighbors.

"I will always stand by your side," read another.

"Stand tall. We will overcome and grow together."

“Dear NY, I know not all is well. But it’s time to step up the game like after the towers fell. Walk into this storm with strong hearts and firm feet."

"It's been really beautiful," Chavez told ABC News of the reactions.

To anyone struggling to process this election, it's OK — so many people are right there with you. Take a moment. Breathe.

Write out your emotions on a sticky note, if you want. Clearly, it helps.

We've got a lot of work ahead of us, after all. And it's work that's best done when our heads are clear and our hearts are full.