When 59 children died on Christmas Eve 1913, the world cried with the town of Calumet, Michigan.

Woody Guthrie sang about this little-known piece of history. 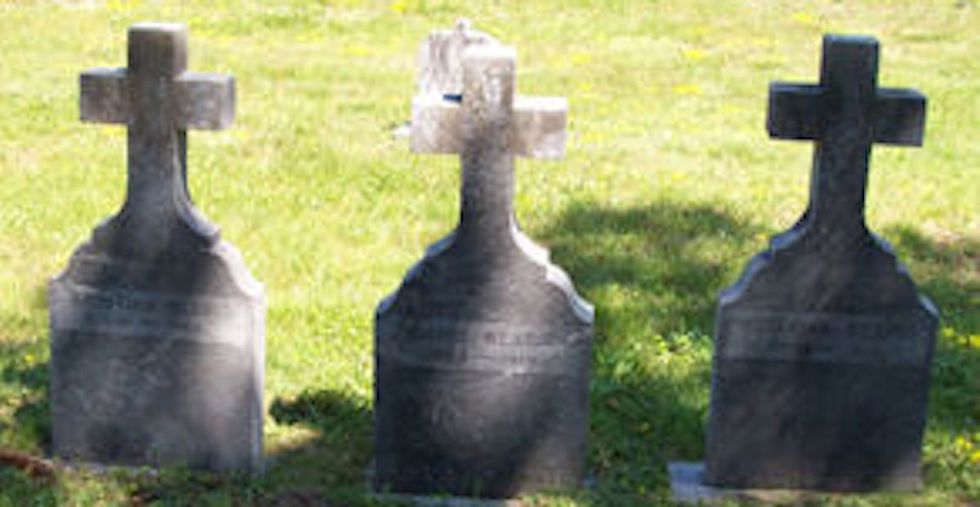 In July 1913, over 7,000 miners struck the C&H Copper Mining Company in Calumet, Michigan. It was largely the usual issues of people who worked for a big company during a time when capitalists ran roughshod over their workers — a time when monopolies were a way of life. Strikers' demands included pay raises, an end to child labor, and safer conditions including an end to one-man drill operations, as well as support beams in the mines (which mine owners didn't want because support beams were costly but miners killed in cave-ins “do not cost us anything.")

Six months without work left many miner families with little food for the holidays and no money for presents, so the Ladies' Auxiliary of the Western Federation of Miners held a Christmas party for the kids. 500 children and 200 adults showed up that day, Christmas Eve 1913. It was held on the second floor of Calumet's Italian Hall; the only way in and out was a very steep stairway.

As darkness fell and people began to go home to their family celebrations, some of the children gathered around the stage as presents were passed out — for many, it would be the only gift they'd receive this year. In the middle of this festive celebration, someone — possibly more than one person — opened the door at the bottom of the staircase and yelled, “FIRE!"

Chaos ensued. As everybody headed down the stairs to the exit, the door was blocked from the outside, and children and adults were trampled, then suffocated, by the throng of bodies trying to escape the “fire" — which didn't actually exist.

Some of the children who died that day

In all, 73 people, including 59 children, died, most of them Finnish immigrants. The youngest was Rafael Lesar, 2.5 years old. The oldest was Kate Pitteri, 66 years old. Some families lost all of their children, like Frank and Josepa Klarich, who buried their three daughters, Kristina (11), Maria (9), and Katarina (7). Their little crosses are lined up in a row over their graves in a cemetery west of Calumet.

The culprits who yelled into the hall that day to start the tragedy were never identified, but it's widely suspected that it was allies of mine management or the owners who did so to disrupt the miners' party. Nobody was ever prosecuted or even arrested for causing the massacre. It is always thus: Those with money and power control the narrative, silence the truth, and thwart justice.

Italian Hall was demolished in the 1980s, but especially during the holiday season, the people of Calumet still talk of that night, 100 years ago, when so many innocents perished.

Partly because a lot of miners left Calumet behind after this tragedy, the strike didn't accomplish what the miners wanted. However, it's considered a turning point for union strength in Michigan's Copper Country.

In 1941, Woody Guthrie got an idea for a song about the tragedy, which he called “1913 Massacre." Ella Reeve “Mother" Bloor's eyewitness account in her 1940 book, “We Are Many," inspired him. Mother Bloor was a labor organizer who was active in the Western Federation of Miners, the union that represented the people who were on strike in Calumet.

Words and music by Woody Guthrie

Take a trip with me in 1913,
To Calumet, Michigan, in the copper country.
I will take you to a place called Italian Hall,
Where the miners are having their big Christmas ball.

I will take you in a door and up a high stairs,
Singing and dancing is heard everywhere,
I will let you shake hands with the people you see,
And watch the kids dance around the big Christmas tree.

You ask about work and you ask about pay,
They'll tell you they make less than a dollar a day,
Working the copper claims, risking their lives,
So it's fun to spend Christmas with children and wives.

There's talking and laughing and songs in the air,
And the spirit of Christmas is there everywhere,
Before you know it you're friends with us all,
And you're dancing around and around in the hall.

Well a little girl sits down by the Christmas tree lights,
To play the piano so you gotta keep quiet,
To hear all this fun you would not realize,
That the copper boss' thug men are milling outside.

A few people rushed and it was only a few,
"It's just the thugs and the scabs fooling you,"
A man grabbed his daughter and carried her down,
But the thugs held the door and he could not get out.

And then others followed, a hundred or more,
But most everybody remained on the floor,
The gun thugs they laughed at their murderous joke,
While the children were smothered on the stairs by the door.

Such a terrible sight I never did see,
We carried our children back up to their tree,
The scabs outside still laughed at their spree,
And the children that died there were seventy-three.

The piano played a slow funeral tune,
And the town was lit up by a cold Christmas moon,
The parents they cried and the miners they moaned,
"See what your greed for money has done."