Children are paying the price of adult wars and unrest. Here's how we can help them. 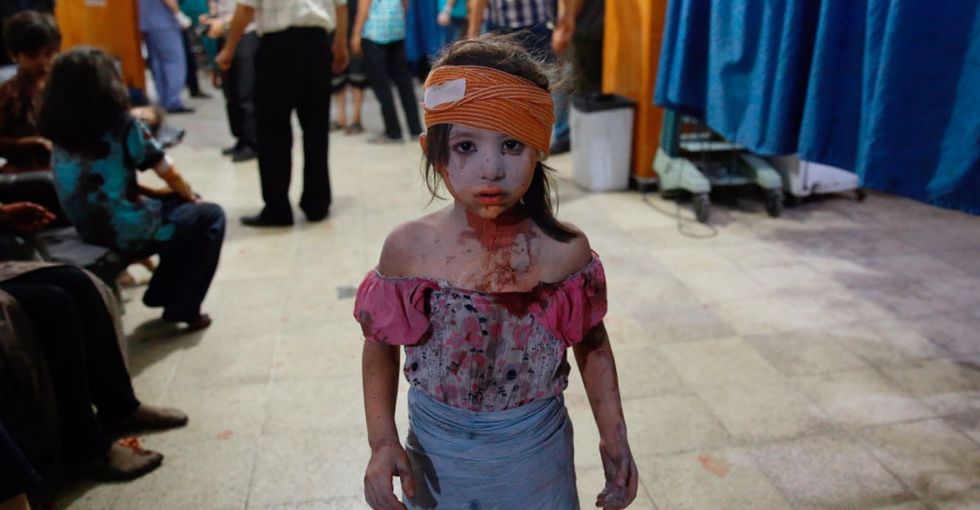 Children pay the price of adult conflicts around the world—and the cost is way too high.

A new report from UNICEF—the United Nations International Children’s Emergency Fund—paints a tragic picture of our world, where war, conflict, and poverty define daily life for millions of children.

The numbers for 2018 alone are staggering—30 million children have been forced from their homes by violence and insecurity. Those who remain in war zones face horrific and ongoing violations, including being recruited to fight, being used as human shields, being raped or forced into marriage, and experiencing severe acute malnutrition.

Those numbers are hard to wrap our minds around, but 30 million children is more than the populations of America’s 10 largest cities—New York City, Los Angeles, Chicago, Houston, Philadelphia, Phoenix, San Antonio, San Diego, Dallas, and San Jose—combined. And that’s just the children who have fled violence, not the ones still living in it.

“It is devastating,” Caryl Stern, CEO and President of UNICEF USA told Upworthy. “It’s been a year of conflict, and the children, because they are the most vulnerable, suffer the most.”

In some countries, more than half of children are in need of humanitarian services.

Parts of the Middle East and Africa in particular are dire places for children, though kids in Eastern Ukraine and Myanmar are also under duress due to conflict.

Stern shared with us some of the specifics:

"The earthquake, you can’t predict, or that disease we don’t have a cure for," says Stern. "But these are man-made emergencies, which is different than some other years . . . In the year 2019 we can do better, we must do better, we should do better."

Here’s how UNICEF is helping—and how you can too.

UNICEF helps the world's children by providing nutrition aid and water where needed, and also by ensuring access to education and creating child-friendly spaces everywhere they serve.

“We do that in the refugee camps, we do that along some of the long walks children are taking these days,” says Stern. “And we do that because we recognize that for future development, children need to be afforded the opportunity to just be a kid. They have to play, they have to sing, they have to dance, they have to have music, they have to be able to let some of what they’re bearing witness to out of them.”

Stern points out that creating child-friendly spaces helps free up parents to deal with the crisis they are facing and make a plan for what’s next. It also helps give UNICEF workers a chance to diagnose severe trauma and direct children to the services they need.

UNICEF is also “the plumber of the UN." They do all the water plans in addition to providing nutrition response and emergency aid. “UNICEF are the people who monitor the children on the ground in countries all over the world,” says Stern, “measuring arms, weighing babies, checking and trying to provide emergency response when it’s severe acute malnutrition.”

How can those of us who live in secure nations help? The most direct way, of course, is funds. Donations are always welcome at unicefusa.org.

"In addition to dollars, which are truly desperately needed,” Stern says, “I think the American people need to depoliticize the care and feeding of children. We need to understand that children don’t vote. Children don’t make decisions about where they’re going to grow up or which country they’re going to be born, they don’t get to pick where they’re born. Children are the innocent victims of the decisions of adults.”

“There is nothing political about saving the lives of children,” Stern adds.

Stern says that a society should be and is measured by how we treat children, and by that measure, we are failing.

“As long as 15,000 children die each day from causes we already know how to prevent, we’re failing,” she says. “Children are our most precious resource and it’s not okay that 15,000 die every day. And that’s not going to change until we—everybody—take responsibility and stops referencing them as Syria’s children, or Myanmar’s children, or Latin America’s children, or American children. They are children, plain and simple. And we need to protect and ensure their futures.”

Keep ReadingShow less
culture
Get stories worth sharing delivered to your inbox
By signing up you agree to Upworthy's privacy policy.
Health

And there's a scientific reason that it's more common for women.

This article originally appeared on 02.13.18

You wear extra chunky sweaters. You've never met a mitten you didn't like. You may even keep a lap blanket at work.

You're one of those people who is always cold. And you are not alone.

Inside or outside, you just can't seem to get warm. This characteristic of yours manifests itself in extra blankets, wild heating bills, and enough complaints that you start going hoarse.