Voter fraud is not a wholesale myth. 11 examples show it actually does happen. 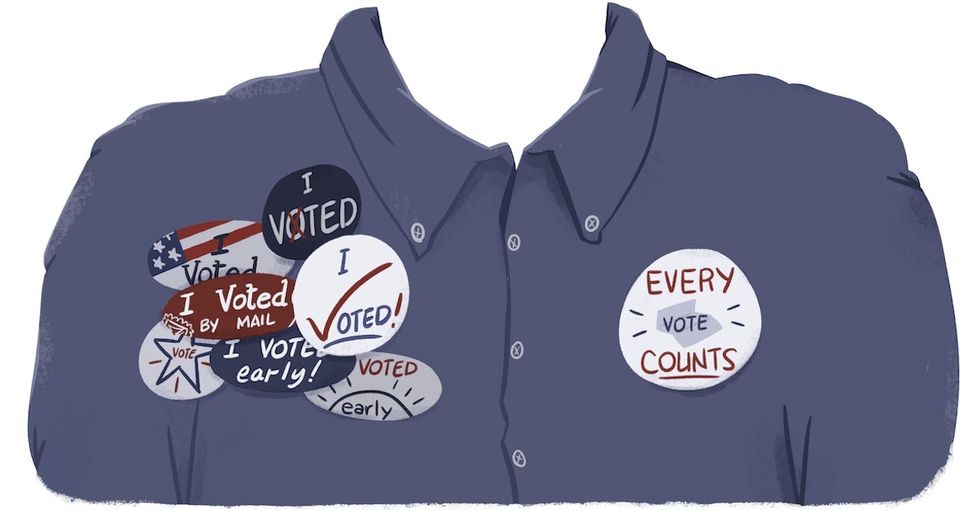 Every election season, cries that voter fraud will threaten the legitimacy of American democracy can be heard throughout the country.

Critics say these claims are exaggerated and backed up by scant evidence. But dismissing voter fraud entirely overlooks the fact that fraud does happen — rarely. This year, Donald Trump has introduced new urgency into the conversation, calling into question any result other than his own victory.

All illustrations by Susie Cagle.

But fear of voter fraud is not new.

It was also cited by those opposing the 1965 Voting Rights Act, its expansions through the ’70s and ’80s, and the 1993 National Voter Registration Act.

Despite the ongoing concern, comprehensive statistics on voter fraud don’t exist — it’s not a crime tracked by government agencies, though many are tasked with policing it.

One study estimated the rate of in-person voter fraud at around...

In 2014, Judge Richard Posner, a judge on the United States Court of Appeals for the Seventh Circuit, opined that most of the evidence provided by activists to prove voter impersonation fraud is:

This category of crime — election fraud — constitutes many acts that don’t readily conform to our idea of a fraudulent voter, from activists and party representatives faking signatures on ballot petition forms to mischievous dog owners registering their pets to vote.

And yet, voter fraud is not a wholesale myth. It does actually happen. So who are the people intentionally corrupting the voting process — and how are they able to do it?

Here is a selection of fraud cases successfully prosecuted over the last 12 years.

Former Appalachia, Virginia, mayor Ben Cooper allegedly conspired to rig the town’s 2004 elections along with his supporters. They reportedly bought votes, some in exchange for beer, cigarettes, and pork rinds.

As the ringleader, Cooper was sentenced to 10 years in prison, while most of his accomplices received suspended sentences or house arrest.

Buying votes, whether with pork rinds or cash, may be the most cinematic form of voter fraud. It is, by its nature, a crime more often committed by politicians and their agents than not, and it often results in stiff criminal penalties.

Peruvian citizen Margarita Del Pilar Fitzpatrick became a permanent resident of the U.S. in 2004. When she later applied for a driver’s license, according to press accounts, Fitzpatrick also registered to vote, and the state processed her application.

She voted in the 2006 election and later told that to immigration officials when applying for citizenship. Her application was denied, and Fitzpatrick was ordered to be deported.

Fraudulent votes by undocumented immigrants are frequently cited as a pressing voter fraud problem, though few cases have been prosecuted. Most have ended in probation and fines.

Fitzpatrick maintained that she registered and voted in ignorance — and the Department of Justice maintained that it didn’t matter. At least some states do not agree. In 2016, California enacted the new Motor Voter law, which states that immigrants who vote by accident, like Fitzpatrick, would not be deported for their crimes.

Former Roselle Borough Council president Jamel Holley allegedly turned in more than 20 absentee ballots in a 2006 election. He was ordered to pay a $125 fine and enter a pretrial intervention program. Despite this, Holley was later elected mayor of the city of Roselle and appointed to the state's General Assembly.

By their nature, absentee ballots are a more attractive tool for fraud than in-person malfeasance. But Holley’s continued rise in politics after the admission of his crime would seem to indicate the voting public, at least in Roselle, New Jersey, is not too concerned.

David Harold Shackley allegedly voted in two different counties in the same election in both 2008 and 2009.

Shackley was warned after his first offense and convicted for his second. He received a 60-day jail sentence and was ordered to pay fines. He called the case “the biggest joke in the world.”

Double voting appears to be most common among the elderly and the recently relocated, who vote once by absentee ballot and again in person. The vast majority of these cases end in plea deals. Shackley was rare in his insistence that the case go to trial, where he claimed that his fraud was the result of stress and negligence, not criminal intent.

Leonis Malburg served as city councilman and later mayor of Vernon, California — the city his grandfather co-founded — for 53 years. It was later discovered that he was not actually one of the town’s estimated 112 residents (because his primary home was elsewhere) and, therefore, was ineligible to run for elected office or even vote there.

Malburg and his wife were convicted at trial, sentenced to probation, and reportedly ordered to pay more than $600,000 in restitution and fines. Malburg was barred from holding office in the future.

Vernon has been the site of many acts of voter fraud, including one conspiracy so broad that the 2012 city council election had to be re-held.

Heather Milam allegedly wrote her husband-to-be's address as her own on a voter registration form. She was later caught by his ex-wife. Milam was served a cease and desist order and a reprimand.

Registration fraud is the most common form of voter fraud, according to available data. It encompasses a large number of crimes, from filing paperwork only for voters registered with a particular political party, to providing false information on a registration form. Accusations of registration fraud, which often take aim at organized drives in low-income communities, far outnumber successful prosecutions.

Henson was convicted at trial. He was sentenced to 60 days in jail and three years probation, and ordered to pay $1 million in damages. He later received additional jail time when he filed for candidacy for state senate, a violation of his parole.

Henson’s case was notable for his lack of remorse – he said his actions were protected by the First Amendment and called the trial “a witch hunt.” The prosecutor on the case said Henson’s attitude indicated “he would do it again.”

Hazel Woodard, allegedly worried that her husband wouldn’t make it to the polls before they closed on Election Day, sent her teen son to vote in his place. When Woodard’s husband did make it to the polls later that day, the fraud was exposed. Woodard pleaded guilty to impersonation fraud and was sentenced to two years of probation.

Impersonating another voter at the polls on Election Day is what many think of when they think of “voter fraud.” But in-person voter fraud is one of the most rare kinds of election corruption: a 2014 study found only 31 cases since 2000. Often it is an additional charge in cases of full-scale identity theft. Voter ID laws purport to limit these crimes specifically, but in Woodard’s case, her son and husband shared the same name, which likely made the deception easier to pass off.

After her husband died in 2012, Verna Roehm submitted an absentee ballot in his name in order to, she said, honor his final request to vote for Mitt Romney for president. Election officials discovered the illegitimate vote and Roehm pleaded guilty. She was convicted of a misdemeanor and was not sentenced to any jail time.

As in other forms of voter fraud, the crime is easier when it’s kept in the family. This is made possible when dead voters are not swiftly purged from registration rolls, an issue often raised by critics worried about the threat of other Verna Roehms but one which election officials say is still very rare.

Temporary worker Deanna Swenson was counting votes with other elections staff when she allegedly tampered with two ballots, filling in blank spaces to cast additional votes.

She pleaded guilty and was sentenced to 90 days in jail and more than $13,000 in fines. Swenson, who had previously worked nearly 10 other elections, said the fraud was “totally out of the ordinary” for her.

The case renewed criticisms that Oregon’s vote-by-mail system, which made voting easier for many citizens, was not secure. Election officials insisted this was an isolated “violation of the public trust.”

Successfully tampering with ballots after they’ve been signed and sealed is not easy given the level of surveillance at elections offices. Ballot-counters work in groups and are often videotaped. Poll workers in other states have been found guilty of election fraud a few times in recent years — almost always for negligence, not malfeasance.

Annique Lesage Newton was convicted in 2009 of embezzling more than $400,000 from her employer. She was sentenced to nearly two years in prison and more than two more years of probation.

But Newton apparently couldn’t stay away: She later pleaded no contest to charges that she defrauded her new employer and registered to vote despite her earlier felony conviction. For her new crimes, Newton received an eight-year prison sentence.

Newton’s own alleged crime of choice may be fraud, but approximately 6 million other convicted felons across the U.S. — or about 2.5% of the voting population — are ineligible to vote after having been convicted of a variety of felonies.

These cases are real but rare.

These aren’t the kinds of numbers necessary to affect election results outside of very small races, but any breach of election integrity can be enough to inspire legislative action.

Judge Posner, who himself wrote an opinion upholding the Indiana law in 2007, has since had a dramatic change of opinion, writing that claims of widespread election tampering as a justification for voter ID restrictions are...

Requiring voters to show ID on Election Day would not have stopped:

or the vast majority of other people convicted of voter fraud since 2000.