Try To See If You Recognize Your State On This Map. I Bet Ya Don't.

I'm from Missouri. In school we learned a LOT about Lewis and Clark, Sacajawea, and all sorts of rich Missouri history stuff. (I even know that the word "Missouri" means "of the big canoe.") So when I saw this map, I thought, "Oh yeah, I'm gonna know this stuff." Nope. It's more than a bummer how overlooked Native American history is, and I hope this map adds a tiny blip of awareness to a too-long-ignored past. 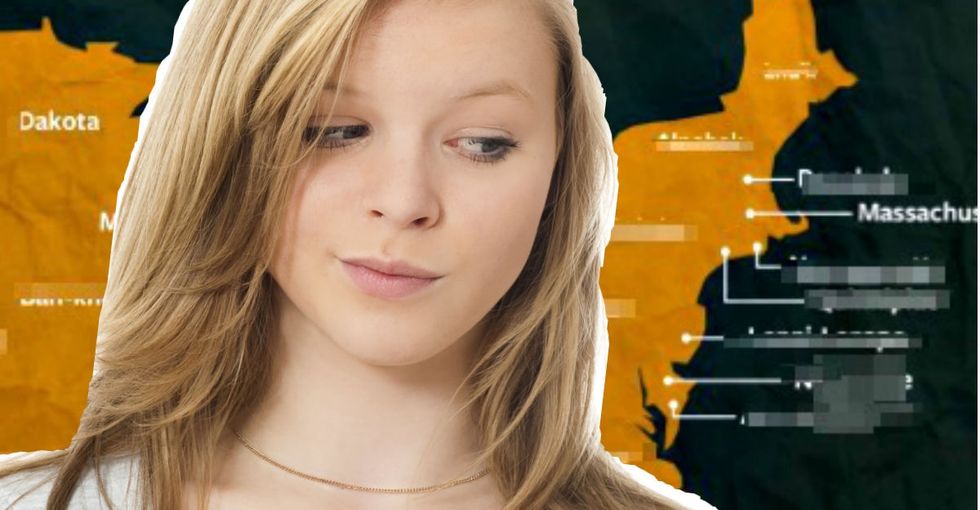 Alabama (Chickasha) – The Chickasha also had a strong presence in modern-day Mississippi. Most were removed and relocated to south-central Oklahoma in the decade following the Indian Removal Act of 1830. Descendants reside there today.

Arkansas (Ugakhpa) – Removed to Oklahoma in 1834. Today, they roll 3,240 deep. The name “Arkansas” comes from “Arkansea,” the name they were called by the Algonquian-speaking Illini people.

California (Chumash) – Before Spanish contact in 1789, they were 22,000 strong and lived in the territory stretching from modern-day Malibu to Paso Robles. By the mid-1830s, their “officially registered” numbers were down to under 3,000. Today, they live mostly on the Santa Ynez Reservation in Santa Barbara, where there are 249 residents.

Colorado (Hinonoeino) – In 1864, Col. John Chivington and his Colorado militiamen murdered an estimated 70-163 Hinonoeino (Arapaho) in a sneak attack that become known as the Sand Creek massacre. In 1999, two “Northern Arapaho” descendants named Ben and Gail Ridgely organized a group of runners to run from Limon, Colorado, to Ethete, Wyoming, in commemoration of their ancestors who were forced to escape Chivington’s forces on foot. Most Hinonoeino still live in Colorado.

Connecticut (Quinnipiac) – Widely dispersed as a result of ethnic cleansing, religious conversion and encroachment happened to them at the hands of Puritans. Today, refugee descendants can be found as far west as Texas and as far north as Quebec.

Delaware (Nanticoke) – The first Nanticoke reservation was established in 1684. In 1881, they reorganized as the Nanticoke Indian Association and in 1922 were chartered as a non-profit organization. Today, they regularly host public cultural events, like powwows.

Florida (Thimogna) – Reduced by conquest from one of the largest tribes in the southeast, with 35 separate chiefdoms, to utter extinction by the turn of the 19th century.

Georgia (Muscogee) – Removed to Oklahoma and a small strip in Alabama in 1832. Now they are dispersed largely throughout the southeastern U.S.

Idaho (Nimi) – Reside largely on the 770,000-acre Nez Perce Reservation, the largest in Idaho. Their original territory was estimated at 17 million acres.

Illinois (Kaskaskaham) – The pre-eminent cause of death among the Kaskaskia was disease brought by Europeans, to which they had no immunity. Today, their numbers are a fraction of what they once were, and they mostly reside in Oklahoma.

Indiana (Mengakonkia) – Now recognized as part of the Miami Nation, they reside throughout Indiana, Oklahoma, and parts of Michigan and Ohio.

Kansas (Hutanga) – Also known as the Kansa or Kaw. The last fluent speaker of the Kansa language reportedly died in 1983, and the last full-blooded member died in 2000.

Kentucky (Honniasont) – Described as a “little-known indigenous people” who inhabited the Ohio Valley above Louisville.

Louisiana (Yuk'hiti ishak) – Most are believed to have been decimated by disease in the 1850s. But descendants live in Texas and Louisiana, and a group of 450 gathered for the first time in over 100 years in 2006.

Maine (Lnu'k) – A strong presence in modern-day Canada, they signed a historic agreement in 2010 stating that the federal government had to consult them before pursuing any activities or projects that impact them.

Maryland (Accomack) – Later known as the Gingaskin, their Virginia reservation was dissolved by the state’s General Assembly in 1813. Today, their descendants live in Maryland and Virginia.

Massachusetts (Massachusett) – One of the first groups to encounter Europeans, their numbers saw an early, sudden, and rapid decline in the 17th and 18th centuries due to infectious diseases. Descendants continue to live in the greater Boston area.

Michigan (Meskwaki) – Today, most live in a settlement in Tama County, Iowa. During World War II, many served in North Africa as “code talkers” against the Germans.

Minnesota (Dakota) – Following the Dakota War of 1862, where Dakota fighters spent the end of summer raiding white homesteads and killing hundreds of settlers, 38 Dakota men were found guilty of rape and murder. Abraham Lincoln had them all killed in the largest mass execution in American history. Today, Dakota people are widely dispersed throughout the Midwest and South.

Mississippi (Chahta) – Per the 2010 Census, Chahta people live in every state of the union. Despite their origins in the Deep South, their largest numbers are in Oklahoma, followed by Texas then California.

Missouri (Neutache) – Many had their own federally allotted homesteads by the early 20th century, but in 1912, the government forced them off their lands when they discovered oil there. Today, they are based in Red Rock, Oklahoma.

Montana (Apsáalooke) – The 2000 Census reported over 6,000 members living on reservations, mostly the 2,300,000-acre Crow Indian Reservation in south-central Montana. In 2008, Barack Obama became the first presidential candidate to ever visit the nation.

Nebraska (Umonhon) – In the 1930s and 1940s, archaeologists excavated a large number of skeletons from Umomhon (Omaha) burial grounds and grave sites and held them in museums for study. In 1989, the Umonhon reclaimed 100 of their ancestors’ skeletons.

Nevada (Numa) – As of last year, 892 members lived on reservations throughout southwestern Utah. Others reside in California and Nevada.

New Hampshire (Penakuk) – Massive numbers of Penakuk were killed off by diseases introduced by Europeans. Many fled north and west, where many more were murdered by English colonists. Though they are no longer recognized as a distinct group, “many bands of Abenaki … in New Hampshire, Canada, and Vermont have Penakuk blood in their veins.

New Jersey (Lenni-Lenape) – Most were forced westward by Europeans and ended up as widely dispersed as New York, Canada, Colorado, Kansas, and Idaho. Some still reside in New Jersey, but “large communities” live near Bartlesville and Anadarko, Oklahoma.

New Mexico (Nafiat) – The Nafiat are one of New Mexico’s myriad “Pueblo” tribes. In 2013, a bill passed in Congress that would transfer 700 acres of national forest land to their Sandia Pueblo holdings. It is “unclear” whether the House will “take any action about the bill.”

New York (Kanien'kehaka) – Today, most members live in settlements throughout northern New York and southeastern Canada. In 2012, Time magazine ran a profile of some of the Kanien’kehaka – commonly known as “Mohawk” – ironworkers who made up about 10% of those building the One World Trade Center tower.

North Carolina (Skarureh) – Originally one of the most prominent nations in North Carolina, the Skarureh now have neither federal nor state recognition. Their descendants mostly live in Oklahoma, where they’ve been absorbed into other groups like the Seneca and Cayuga.

North Dakota (Hiraacá) – A smallpox epidemic in 1837-1838 reduced their numbers to around 500. Today, their descendants reside mainly on the Fort Berthold Reservation in North Dakota, where they’ve affiliated themselves with two other groups, the Mandan and the Arikara.

Ohio (Shawanwa) – A group of Shawanwa known as the “Loyal Shawnee” were among the very last to leave their Ohio homeland in the late 19th century. In 2008, the federal government counted 7,584 “enrolled” members, most living in Oklahoma.

Oklahoma (Niukonska) – The Niukonska – known as “Osage” – were one of the only American Indian nations to buy their own reservation. It currently encompasses 1,470,000 acres in present-day Osage County, Oklahoma.

Oregon (Nimipu) – Today, tribal lands are mostly centered on a reservation in northern Idaho. Nimipu Chief Joseph stated one of the most famous surrender quotes in American history: "Hear me, my chiefs, I am tired. My heart is sick and sad. From where the sun now stands, I will fight no more forever."

Pennsylvania (Alliwegis) – The majority were wiped out early on during wars with other Native tribes. Anthropologists have hypothesized that the remaining few fled to Virginia and South Carolina. Some of the Seneca people living in Kansas and Oklahoma claim to be descendants.

Rhode Island (Narragansett) – They lost much of their land during Rhode Island’s “detribalization” efforts between 1880-1884. They still reside in Rhode Island but have been embroiled in constant legal battles over land ever since.

South Carolina (Ye Iswah h're) – The U.S. government terminated their registered tribe status in 1959, and it wasn’t until 1993 that they regained federal recognition. As of 2006, their numbers had grown to about 2,600.

South Dakota (Lakota) – The Lakota are currently recognized as a semi-autonomous nation within the U.S. This gives them leeway in deviating from some state laws – such as gambling – but ultimately they’re beholden to federal oversight. Some Lakota have been active in efforts to secede from the states altogether. In 2014, a group launched a digital currency called MazaCoin, which they dubbed “the national currency of the traditional Lakota nation.”

Tennessee (Ani'yunwi'ya) – Commonly known as the “Cherokee” nation, most now reside in Oklahoma and North Carolina. Many even made their way to Oregon and California, where they were drawn by job availability during the Great Depression.

Texas (Numunuu) – They have around 15,191 members today, around half of whom live in the tribal jurisdictional area around Lawton and Fort Sill, Oklahoma. Less than 1% of them speak their original language today.

Utah (Nunt'zi) – Primarily dispersed throughout three reservations in Utah, one of which also bleeds into Colorado and New Mexico. In total, they number about 7,000.

Virginia (Monacan) – To date, they have not been recognized as a tribe by the federal government. As of 2009, there are approximately 2,000 identifying members.

Washington (Waluulapam) – Today, most live on the Confederated Tribes of the Umatilla Indian Reservation near Pendleton, in northeastern Oregon.

West Virginia (Mohetan) – No known populations survive today. The best-known document of the Mohetan’s existence has been brief mentions in the journals of English explorers from the 1600s.

Wisconsin (Mamaceqtaw) – Their tribe status was terminated by the U.S. government in the 1950s, but they regained federal recognition in 1973. The Mamaceqtaw (Menominee) have 8,700 members today, mostly on a 353.894-square mile reservation in Wisconsin.

Wyoming (Tsisistas) – Merged with the Sutai people in the early 19th century, today they are collectively recognized as the Southern and Northern Cheyenne. Intermarriage with other groups has blurred definitive population count, but estimates put total “Cheyenne” numbers at over 20,000.