We haven't just paved paradise—we've plastered it in plastic 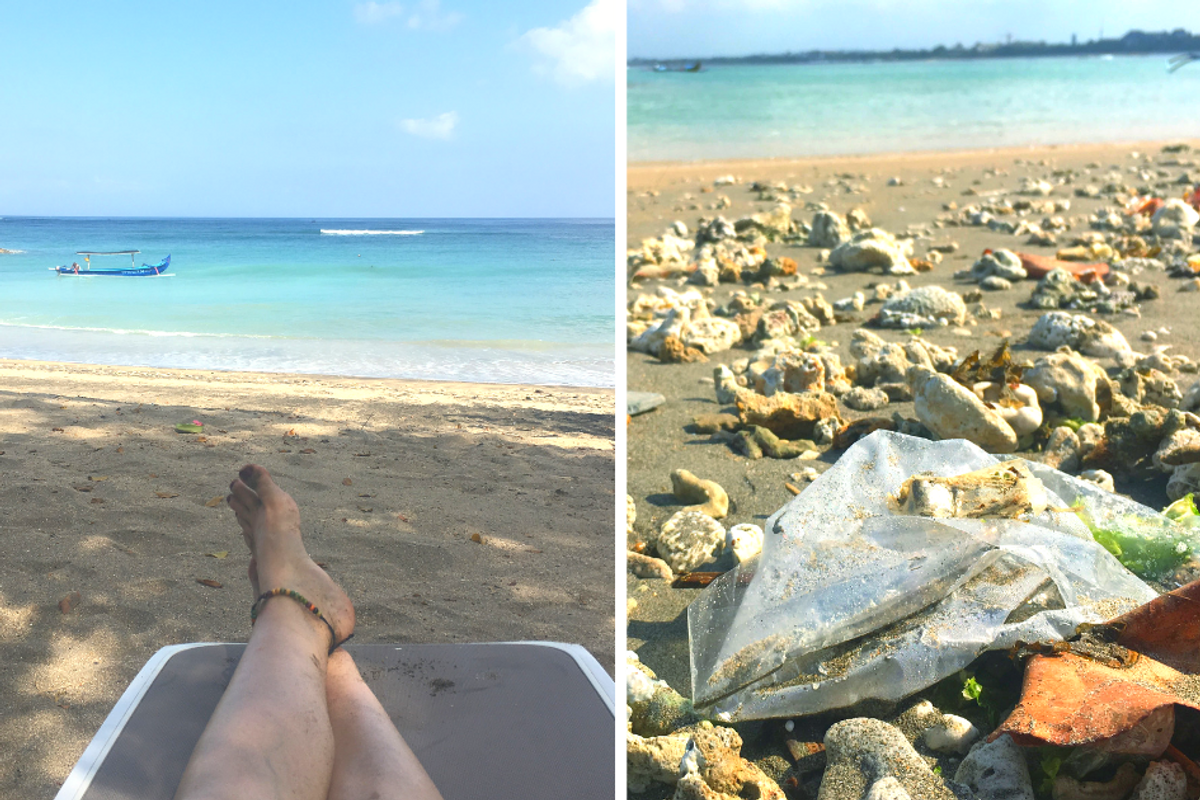 Two weeks ago, I was enjoying a leisurely seaside breakfast in Bali, watching the waves of the Indian Ocean roll in. It was an idyllic scene—palm trees, warm sun, turquoise waters—exactly the kind of place we call paradise.

As I sipped my coffee, my travel companion and I noticed a group of people gathered on the beach. They meandered along the shore, raking through the sand and placing things into a wheelbarrow. I thought perhaps they were treasure hunting, but a waiter told us they were picking up trash that had washed ashore overnight.

After breakfast, we walked along that same beach. Even after the big group cleanup, there was a lot that they'd missed. A few plastic bags here, a disposable diaper there.

The day before, we'd driven inland to Ubud, a village made famous by "Eat, Pray, Love," with its stunning temples, a sacred monkey forest, and beautiful Balinese architecture. As we soaked in the scenery, I was occasionally distracted by collections of trash built up in between buildings. So much packaging and so many water bottles in such a beautiful place.

RELATED: An accident resulted in a plastic-eating mutant that just might save us all.

Of course I know our planet has a plastic problem—you'd have to live under a rock not to—but there is something particularly painful about seeing plastic pollution in paradise. It's one thing to be walking through a busy metropolis and see some expected rubbish on the street. It's another to be in a place of pristine natural beauty and feel wrapped in the tentacles of this petrochemical monster we have created.

I live on the U.S. mainland, with its vast stretches of land and plenty of space for out-of-sight landfills. Here, our garbage and recycling get dutifully tossed into separate containers, then magically disappear from our doorstep to be processed in some faraway facility that we never see. As much as I try to be ecologically conscientious, it's easy to hide the truth about my personal consumption and waste at home.

But in Bali, it's different. On an island about half the size of the big island of Hawaii, trash has nowhere to hide—and I find myself directly confronted with my own role in contributing to the overall problem.

For example, tourists in Bali are encouraged not to drink the tap water. Our hotel provided complimentary bottles of Nestle PureLife water—four bottles per day in our room, plus any more that we needed from the gym down the hall. I had brought my own stainless steel water bottle with me, but ironically the only way to fill it was from plastic water bottles. I kept multiplying how many bottles I drank by the 7 million tourists who visit Bali each year, and that math alone was mind-boggling. And that's just for water, which all of us need, especially in the heat of the tropics.

I tried to think of possible alternatives. Perhaps I should have brought my own personal water filter. Couldn't the hotels install central filtration systems? Would that be more expensive than bottled water? Does that matter at this point? There's no way that this level of plastic use can continue without the dire consequences we are already seeing.

Bali declared a "garbage emergency" in late 2017 and has since taken steps to mitigate its plastic problem, such as banning plastic bags in supermarkets. But there's still a long way to go. There simply aren't adequate recycling and waste processing facilities on the island, and those aren't things that can be built in a day—or without significant cost. Plus, as we've learned in my own highly developed country with plenty of waste processing abilities, recycling isn't actually the bastion of environmental hope we've made it out to be.

RELATED: Recycling was supposed to help save the planet. It's past time for us to rethink that idea.

Not all of the plastic washing up on Bali's shores comes from Bali itself. Currents bring waste from the larger Indonesian island of Java, where the capital of Jakarta is home to 10 million people (with triple that amount in the greater metro area). Indonesia is the second-largest plastic waste producer in the world, after China, and far too much of that plastic ends up in the ocean.

A few years ago, a video of a diver swimming through a sea of garbage off the coast of Bali went viral. Such an extreme was a bit of a fluke—there's not that much concentrated trash in that place on most days—but it was a wake-up call. My expat friend who lives in Jakarta says awareness in the region seems to be increasing. But isn't nearly where it needs to be to solve this problem.

The week after I visited Indonesia, I traveled to a rural area in Thailand. My friends and I took a boat ride out to a small, remote island in the middle of the Ping River, where an old monk lives by himself. The island has nothing but trees, some steep stone steps, a few small temples, and a solitary monk. Yet even on that remote island, the evidence of our plastic dependence was clear. A water bottle left along a stone wall. A basket of discarded plastic trash from others who visited the island before us.

It made me realize that there's practically nowhere in the world you can go now and not be surrounded by plastic waste. In under 70 years, the proliferation of plastic in our daily lives has transformed the planet so much. But it's not as though it's all evil. Plastic is an amazing invention, truly. But the costs we didn't account for are becoming more and more obvious. And the problem is so huge, it feels overwhelming.

As I step over another plastic bottle cap on the beach, I can't help but think about where all of this originated. It's not like the Balinese people—or Indonesian, or Chinese, for that matter—invented plastics. They were created in the U.S. and introduced to the rest of the world by the spread of Western industrialization. Bringing such a product to the developing world—one that makes life easier, more sanitary, more convenient—feels like progress. And it has been, in many ways. But with no thought of and no plan for handling the consequences, this is the result. Plastic has become part of daily life everywhere, but no one adequately prepared for the aftermath that would follow.

And when it comes to plasticizing paradise, it's not like the modern West isn't playing an active, ongoing role. We spent decades shipping our plastics overseas to China to be recycled. After they started rejecting our trash in 2017, we started sending more of it to Southeast Asia, where both legal and illegal recyclers and processors comply with environmental regulations to varying degrees. Basically, we've been using Southeast Asia as our dumpster, and I can't help but wonder how much of the trash washing up on Bali's beautiful shores may have originated in the U.S.

So what is the solution? That's the big question with no simple answers. We can certainly each do our part to reduce our impact, and we should. But it's going to take more than just individual efforts. Considering how our collective actions affect one another, I don't see how anything short of a unified, worldwide plan with the political and economic support of all nations will be enough to save paradise—and the rest of the world—from what we've done to ourselves.