ShelterBox could be vital in Italy right now. This is how you can help those in need.

There's no need to feel hopeless. 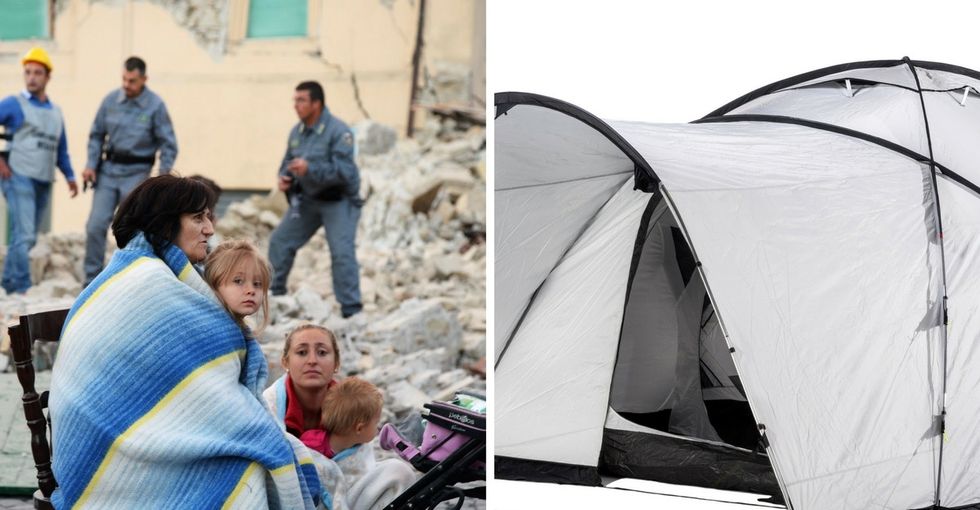 Amatrice, a popular tourist destination, was devastated by the quake.

"It was one of the most beautiful towns of Italy and now there's nothing left," a woman whose home was destroyed told AP. "I don't know what we'll do."

Officials say at least 120 people have been killed, and rescuers are still struggling to help those in more remote areas.

Near the town of Accumoli, for instance, bulldozers, ambulances, and other aid equipment haven't been able to access affected areas because main roads have been blocked and are too dangerous to cross.

"They’re still very much at the beginning of their search and rescue operation," CNN's Fred Pleitgen reported Wednesday morning.

To make matters worse, shortly after Italy was rocked by devastation, an earthquake hit Myanmar, too.

The quake killed at least three and damaged ancient temples in the Southeast Asian country.

Italy and Myanmar need our help now more than ever.

There are many groups from around the world stepping up to do their part.

One such group is ShelterBox.

The nonprofit provides pop-up emergency shelter and vital supplies like blankets, hats and gloves, and mosquito nets to people affected by natural disasters around the world.

Photo by ShelterBox, used with permission.

Photo by ShelterBox, used with permission.

While many aid groups provide resources such as food and medicine in the aftermath of devastation, safe and reliable shelter is often lacking in the critical stage between immediate assistance and long-term rebuilding efforts.

That's where ShelterBox is particularly helpful.

When disaster struck this morning, ShelterBox didn't hesitate to make its move.

Chris Alexander, the group's communications manager, said ShelterBox has an assessment team on the job that will work with affiliate groups in Milan to see if a response is feasible and needed at this point. The group is also monitoring the situation in Myanmar.

If ShelterBox can be of service, the group will provide resources to affected areas ASAP.

Josh Mohr, a member of ShelterBox's response team, said it's been incredible to work for a passionate group that makes a "very tangible impact" on the communities it serves.

"Seeing a family whose home and livelihood has been completely destroyed is heart-breaking," said Mohr, who's been deployed to four different countries since joining the response team in 2011.

"Being able to give them aid and the ability to reestablish their lives is an incredible feeling and one that is tough to explain."

There are many ways you can help out in the wake of these natural disasters.

If you're inspired to help out, you can learn more about these groups and their efforts at the links below:

Learn more and support efforts by organizations like ShelterBox.

The Italian Red Cross is proving vital help on the ground in affected areas.

Help Save the Children, operating now in Myanmar, provide aid.

La Stampa's emergency relief fund is providing assistance to victims of the quake in Italy.

Encouraging messages and ways to help those in need are going viral under the #PrayForItaly hashtag on Facebook and Twitter. Join the conversation.

And if you're worried about friends traveling in Italy — or maybe you're there and want to let loved ones know you're safe — use Facebook's Safety Check feature.

Italy and Myanmar, our thoughts are with you — and, more importantly, our actions to help you recover are, too.