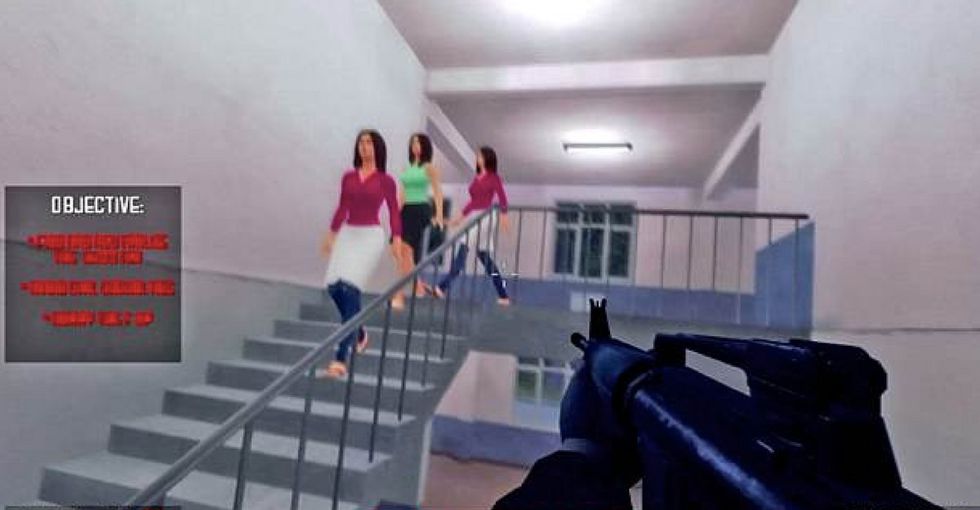 A video game simulating a school shooting has been shut down before its launch — largely due to Parkland parents denouncing it.

Following in the footsteps of both Roseanne Barr's TV show and problematic scenes from the movie "Show Dogs," a video game called "Active Shooter" has been nixed due to public outcry. The game simulates a school shooting and allows players to play either the school shooter or a SWAT team member.

Screenshots of gameplay released by the creator paint a horrific scene: If you're playing the shooter, you use your semi-automatic rifle to gun down students, teachers, law enforcement, and anyone else you feel like murdering in a school building. A digital counter keeps track of how many civilians and cops you've killed.

The game was published by the game studio Acid Publishing of Moscow and was slated for release on June 6 through Valve Corp.'s online gaming store Steam.

Parents of victims of the Parkland, Florida, school shooting raised their voices loud and clear to denounce the game.

Fred Guttenberg, whose 14-year-old daughter Jaime was one of 17 people killed by a gunman at Marjory Stoneman Douglas High School on February 14, 2018, wrote about the game on Twitter: "I have seen and heard many horrific things over the past few months since my daughter was the victim of a school shooting and is now dead in real life. This game may be one of the worst."

This company should face the wrath of everyone who cares about school and public safety and it should start immedia… https://t.co/rXnJxwe2qY
— Fred Guttenberg (@Fred Guttenberg)1527434728.0

Ryan Petty, whose daughter Alaina was also murdered in the Parkland shooting, wrote in a statement on Facebook, "It's disgusting that Valve Corp. is trying to profit from the glamorization of tragedies affecting our schools across the country. Keeping our kids safe is a real issue affecting our communities and is in no way a 'game.'"

A Change.org petition was created to put pressure on Valve not to release it. More than 208,000 people have signed it, as of this writing.

The people spoke — and it worked. Valve will not be putting the game on their site.

The beauty of the age of social media is that people can speak up and accountability can be set into motion. Thanks to the Parkland parents and others drawing negative attention to the game, Valve decided not to put it on their site. They also released a statement explaining who was behind creating it.

“This developer and publisher is, in fact, a person calling himself Ata Berdiyev, who had previously been removed last fall," Valve's statement said:

"Ata is a troll, with a history of customer abuse, publishing copyrighted material, and user review manipulation. His subsequent return under new business names was a fact that came to light as we investigated the controversy around his upcoming title. We are not going to do business with people who act like this towards our customers or Valve."

Washington Post writer Alex Horton made an interesting observation about the game's trailer, which has since been removed from Steam's site: All of the "civilians" shown are women.

One thing that struck me about the 'Active Shooter' game that let's you play a school shooter: all the civilians (r… https://t.co/bpnIMvqgf9
— Alex Horton (@Alex Horton)1527621676.0

If a video game created by a Russian "troll" where you can play a school shooter and gun down women isn't a symbol for America 2018, I don't know what is.

We the people have power. Let's keep using it.

Having free speech and living in a free market system means that our voices and our actions can help determine the kinds of products that succeed and those that don't. When something that people find vile, cruel, or dangerous rears its head, we can use the collective power of our voices and purchasing power to pressure companies to shut it down.

Let's keep speaking up. It's working.