We asked people to share the nicest thing a stranger's done for them. The stories are pure humanity. 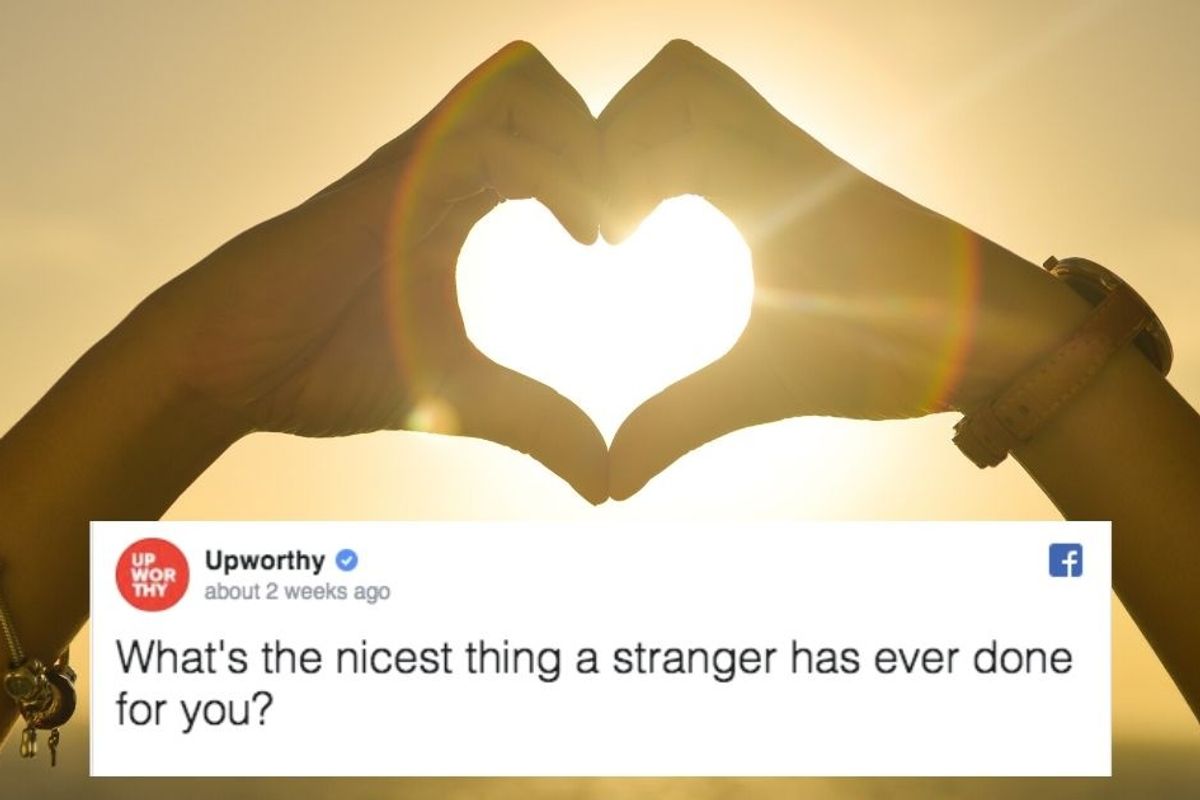 The kindness of strangers is one of the most beautiful things about being human. Sure, there are selfish jerks out there, but the vast majority of humanity are good people who truly care about others. We just sometimes forget to look for the good that's all around us.

We asked our Upworthy audience on Facebook to share their stories of the nicest thing a stranger has done for them, and their answers didn't disappoint. Hundreds upon hundreds of comments poured in, with incredible stories of selfless kindness.

If you need a pick-me-up today, these stories might help. You can read all of the comments on our Facebook page, but here are some highlights:

"When my son was little my son saw a pair of sneakers on clearance. They were every color of the rainbow and $3. I had no money and he needed the shoes. So we hid them in a cabinet under the display and I told him if his dad could get work this week (he lost his job and was doing odd jobs at our apt complex to get money towards our rent—I was working part time and was pregnant with my fourth child) I told him if dad could get a little job that week we could come back and get the shoes. He was going into kindergarten in a few weeks and the other kids told me they didn't need new shoes to try to get them for their brother. As we left the mall after we got my little bit of groceries and started to walk home an elderly lady handed me a bag, I told her it wasn't mine and she said it was and walked away. In the bag was the shoes. She must have been watching and listening. My son was so proud to wear those shoes because an angel lady gave them to him." – Michelle T.

"When I was 9, I was on holiday with my dad. I spent ages in the arcade on the claw machine trying to get this one toy. I ran out of change, so dashed to the change kiosk, and when I got back to the machine, the toy I was trying to get was gone. I was starting to tear up, when there was this tap on my shoulder and this woman handed me the toy I had been trying to get. She'd watched me trying to get it all that time, managed to get it on her first go and felt bad for me so she gave it to me. I loved that toy so much!" – Kimberly H.

"I was heading up for my daughter's wedding weekend and stopped at a lovely gift shop for a card and maybe a little something extra. I asked how much the beautiful, green milk glass cake stand was and it was over 100.00. I decided I had spent enough money and just went to pay for the card. She came out from the back room with a gift bag all wrapped. She said please take this. I can tell you're a great Mom. I broke down in tears. I've been paying it forward ever since." – Jeannie J.

"3am walking home alone from a club. A guy who had slowly been catching up to me apologised and hurried past me, saying he could see I was nervous with him walking behind me. I thanked him and relaxed a little. Not a hundred yards later, a second man shouts from a passing car, pulls up in front of me and GETS OUT OF THE CAR, beckoning me into the back seat. The previous man is now a while ahead but turns round and shouts "babe come on, I wanna get home!" And starts walking back towards me. Man #2 hurriedly gets back in his car and speeds off.

The first man just gives me a thumbs-up and goes on his way. Nice." – Ruth C.

"Almost a decade ago I was abused by my husband for the last time. It was the first time I had gone to the hospital because of the abuse and I went via ambulance. I swear, every single person I spoke with—every medical worker, security guard, cop, and any person I spoke with in the waiting room as I waited to be picked up to go home shared stories with me about domestic abuse. I was still in such denial but my face was so wrecked, everyone could see what I had been through. My ex went straight to jail from the incident and I have not seen or spoken with him since. Those strangers treated me with respect and dignity and were a huge driving force in me getting out with my children alive. I have come so far and now work in the medical field and share my stories of abuse and escape in hopes that I can help even just one person to get out. I don't know any of their names or faces. I am forever grateful for the time that they all took to save my kids and me." – Mya F.

"Comforted me in the lobby of the veterinary clinic where my dog had just been euthanized. I was standing there sobbing, unable to walk out, and she asked if she could give me a hug. I told her she could and she did. It meant so much to me—I will never forget her." – Amy D.

"A pharmacist paid for my prescription when I was fresh out of college and broke. I was crying counting my change and he just told me to take it." – Lindsey M.

"After I learned that my Mother chose not to have a life saving procedure, that she wanted to let go and die peacefully and I only had hours left with her, I walked into the hospital hallway and emitted painful, wailing cries and fell to the floor. A complete stranger asked if she could hug and hold me because I was breaking her heart. She didn't want me to be alone. After five minutes she told me to be strong, wipe my eyes and not let my mama hear or see me like this. She was an angel during a time of serious need. I will always be grateful for her words, comfort and strength." – Nicole R.

"I was 15 y.o and just landed in Seattle from boarding school in Utah. I decided to hitch-hike alone from Seattle to Denver. A trucker picked me up in Spokane and took me to Billings MT where I'd lived as a kid briefly. He toured me around town to see my home, my school, my piano teacher's house. Then we went to where his trucker buddies all hung out to try to find me a ride to Denver. After a few hours, he told me to get into his rig. He drove to the airport. Told me to wait while he ran inside to 'do a chore.' He returned with a plane ticket and handed it to me and told me 'No argument. You're getting on that plane. I don't trust any of those guys to get you there safely' His name was John van der Horne. He gave me one of his bank deposit slips. His parting words to me were 'You'll think of me someday.' When I was in my 20's (I'm 63 now) I sent him a check and a huge 'thank you.' He never cashed my check and I never heard from him again.

Thank you, John van der Horne. Wherever you are." – Terilee H.

"I was in town one day—we only live in a small town and it was the day the farmers market was there so it was quite busy. I took my child with ASD with me to pick up some things and pop into the bank. Halfway through the town he had a meltdown and threw himself on the floor, rolling around and screaming. Lots of people walking by would stare and make comments, and I reached the point that I just wanted to cry. I couldn't get my son to walk any further and had big bags of shopping to carry so I couldn't carry him. I was exhausted because I'm a single parent and my son had never slept through the night and I have a neuralgia condition meaning I was in constant pain.

A lady with her young child came up to me with flowers and said that she'd had a tough day the day before and someone had bought her flowers, which cheered her up, so she'd done the same for me. She offered to put the bags on her pushchair and carry them to my car so I could carry my son. That made such a difference to my day." – Holly L.

"My husband died unexpectedly at home about 18 months ago. One of the initial first responders to arrive was a police officer I did not know. He sat and held my hand for hours until my husband's body was removed. Had never seen him before, and have only bumped into him one time since that day." – Denise M.

"I was on holidays in San Anselmo, California when I got food poisoning. The hospital staff were so lovely. Two people even offered to give me cab fare back to my B&B. This Aussie was so grateful for their kindness. I wrote to the hospital when I got home and thanked them." – Myrna H.

"Had a stranger pay for my family's and myself's appetizer/dinner/drinks/dessert at a mid-priced restaurant. There were six adults and one child. It was absolutely incredible. They even paid the tip! I was dumbfounded when I asked for the check and was told that there wasn't one." – Holly F.

"Years ago I was shopping with my 3 kids. I had a list and was adding up the cost as I went along. Single mom, little money. When I checked out the cashier said the woman in front of me gave her $25 to help cover my groceries. It was such a quiet kindness." - Dana S.

Here's to the "quiet kindness" of strangers, reminding us that people are awesome and humanity at its best is pretty darn amazing.