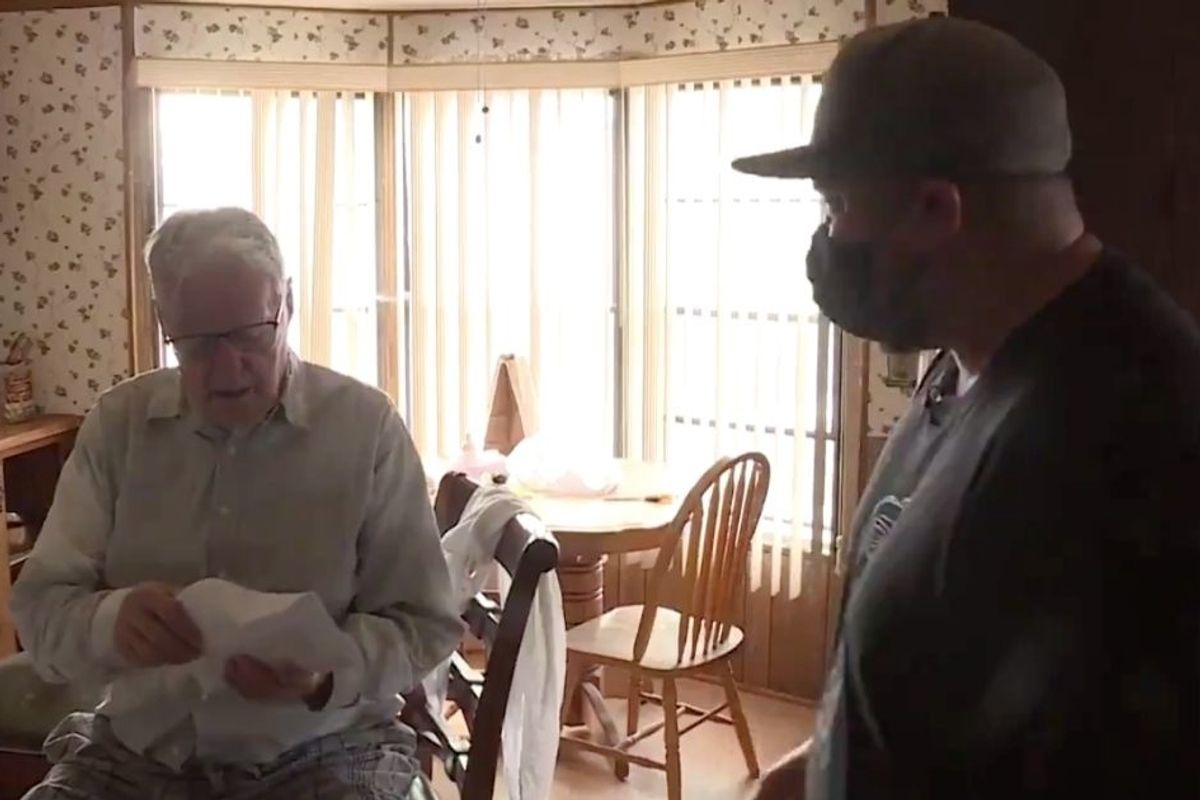 "What is this guy doing delivering pizzas? True hustler," Valdez wrote when he shared the video. He decided to find out.

When Valdez discovered that the elderly man worked five or six shifts a week for Papa John's, he and his family decided to do something kind for him. They set up a Venmo account for their TikTok followers to donate to—Valdez specified small donations of $.25, $.50, or $1.00—and they would just see what kind of a "tip" they could collect for Newey.

In a week, they raised an impressive $12,069 for Newey—and he had no idea. After a couple more deliveries (set up by the Valdezes on purpose so they could get more info), Newey invited the Valdezes to come share a meal at his house—because that's just the kind of guy he is. And when they showed up they brought a big fake check.

They also gave him the cash in an envelope right then and there.

"How do I ever say thank you," said Newey, clearly moved. "I don't know what to say."

89-year old Derlin Newey is a pizza delivery man who received a surprise delivery of his own today. A couple who go… https://t.co/hEajer2EiU
— Alex Cabrero (@Alex Cabrero)1600815774.0

Newey lives alone and says he works about 30 hours a week delivering pizzas because his social security check isn't enough to support him.

"This couldn't have gone any better," Valdez told KSL. "He needed this. I'm just glad we could help him. We just need to treat people with kindness and respect the way he does. He stole our hearts."

Valdez posted a follow-up thank-you video to his 60,000 followers on TikTok today.

"We did it. We all came together as a community to help a complete stranger that we didn't know. With everything that's going on in the world, I'm just glad that we pulled together, came together, to show some kindness during this time." After thanking everyone, he said he's received a lot of message from people who want to give something to help, so Valdez said he's going to keep the Venmo account open for people to donate, with all of the donations going directly to Newey.

Well done, Valdez family. Thank you for introducing us to the delightful Derlin Newey, and thank you for reminding us that people can be such forces for good.