This queer teen made it through a terrible night — thanks to a text. Their story matters. 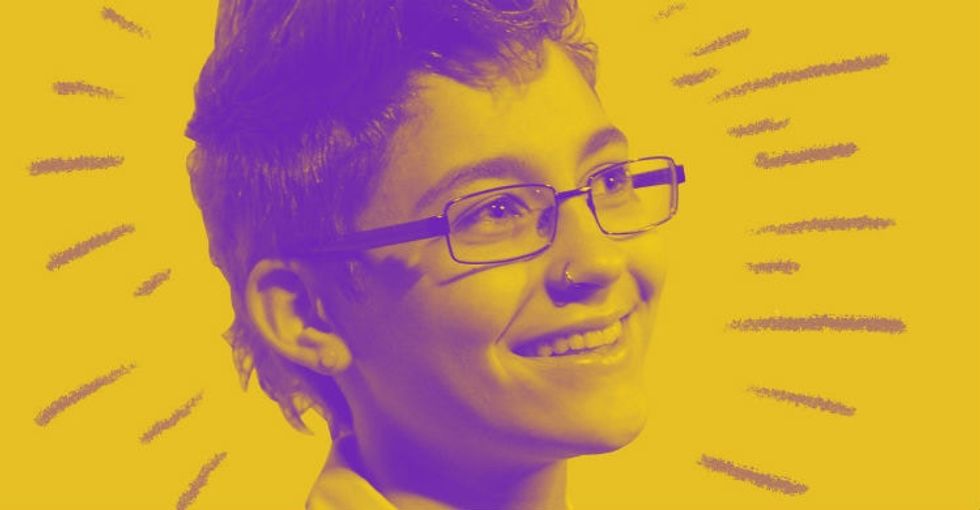 Photo by Craig Barritt/Getty Images for The Trevor Project, artwork by Tatiana Cardenas/Upworthy.

A couple years ago, Brendon Scholl was having a terrifying night.

They can't recall many of the details. "Most of it is just a big blur," says the now-17-year-old, who is transgender and non-binary, and uses they/them pronouns.

But they do remember crying hysterically, rattled by an inescapable sense of loneliness and an isolating anxiety that'd often accompany them to bed, when their friends were asleep and unreachable by text.

"I was in a really bad place," Scholl says. "I was kind of freaking out ... I was having a really hard time with [the idea that] people didn't want me around."

Scholl's scary night reflects a much larger issue at hand: a generation of young queer people whose mental health desperately needs to be addressed in serious, systemic ways.

According to a report published in May from the Human Rights Campaign and researchers at the University of Connecticut, an alarming 95% of LGBTQ teens said they, like Scholl, have trouble sleeping at night. 77% reported feeling depressed or "down" during the week. Only about one-fourth reported feeling safe in their schools, and a similarly sobering number claimed they could "definitely" be themselves at home.

"It's complex," answers Amit Paley, CEO of The Trevor Project — a suicide prevention and crisis intervention nonprofit for LGBTQ youth. "There are a lot of reasons that young people need help and are reaching out."

For starters, LGBTQ youth aren't insulated from America's larger, worsening suicide crisis, Paley says. Between 1999 and 2016, overall rates of suicide rose — and often dramatically — in almost every U.S. state, according to new data from the CDC. What's more, in its newly released "Youth Risk Behavior Survey," the CDC found 23% of high school students who identify as lesbian, gay, or bisexual have attempted suicide.

That's four-times the rate of their straight peers.

Other research suggests the figure is even higher among transgender and non-binary teens, like Scholl.

Chart via the CDC.

In Scholl's case, it's easy to see how. "I remember very vividly my grandma calling me and being like, 'I'll give you a $100 if you go back to being a girl,'" they recall. "I didn't even know what to say, really."

Those attitudes have been around for awhile, sure. But now, LGBTQ kids have Trump to worry about too.

Call volume to The Trevor Project more than doubled the day after the 2016 presidential election, according to Paley. LGBTQ kids were terrified by the rhetoric they'd heard from Trump on the campaign trail.

The flow of calls coming in has remained relatively high ever since too, thanks in part to a divisive 24/7 news cycle with bigotry on full display.

When the fight over LGBTQ rights has gotten heated in the headlines — like the day the president tweeted that transgender people would be banned from serving in the military, or when Texas debated whether to implement a transphobic bathroom bill — The Trevor Project noticed spikes in need from the kids they're aiming to protect.

Across the various crisis lines young people can use to contact the nonprofit —along with its 24/7 phone hotline, The Trevor Project also operates a text service and online chat platform — Paley says the organization estimates it will make contact with young people in crisis about 75,000 times this year alone.

That's an increase from last year, and one reason the group is focused on expanding services and programs for youth across the country.

At a time when we seem to be moving ahead on LGBTQ issues in many ways, the need to take care of young queer kids has never been greater.

"Our ultimate goal is to put ourselves out of business," Paley notes. But that seems unlikely in the short-term. So The Trevor Project aims high.

The nonprofit wanted to raise a record-breaking $2 million to further its mission through Trevor Live — the group's annual, star-studded fundraising gala — on June 11. It exceeded that ambitious target, but it's a bittersweet benchmark to pass, knowing why those funds are so needed.

There are still too many kids who, in a moment of crisis, desperately need Trevor to be one call, text, or online chat away. Kids just like Scholl — who decided to use the group's text service that awful night a couple years ago for help.

"They got back to me immediately and helped me feel a lot less alone," Scholl explains. "Even if I get that bad again, [I know] I'm not going to be completely alone."

Now, Scholl is out and proud — and refusing to stay silent.

They're out to their family. And their friends have been "super great" about respecting their pronouns and identity as a non-binary person.

At Trevor Live, Scholl bravely shared their story to a room full of celebrities and supporters. The speech was met with cheers and a standing ovation.

A vicious political climate and lack of mental health resources may mean kids like Scholl live in an especially hostile environment. But LGBTQ teens — who are coming out earlier in life and reshaping how we see and respect gender and sexuality — are also totally badass.

They're determined to find the right school with a welcoming environment for LGBTQ students, equipped with gender-neutral housing. That's not a terribly easy feat, to be sure — "I'm excited, but also stressed," Scholl admits of the process — but it's one worth working for.

It's another mountain they're determined to climb.

"I know it's like the most cliche thing to say ever, but it does get better," Scholl says. "It's like, when you're going up a hill: You're tired, it feels like it's going on forever, and you're never going to get to the top. But once you do, you look back, and you're like ... 'I made it that whole way.'"