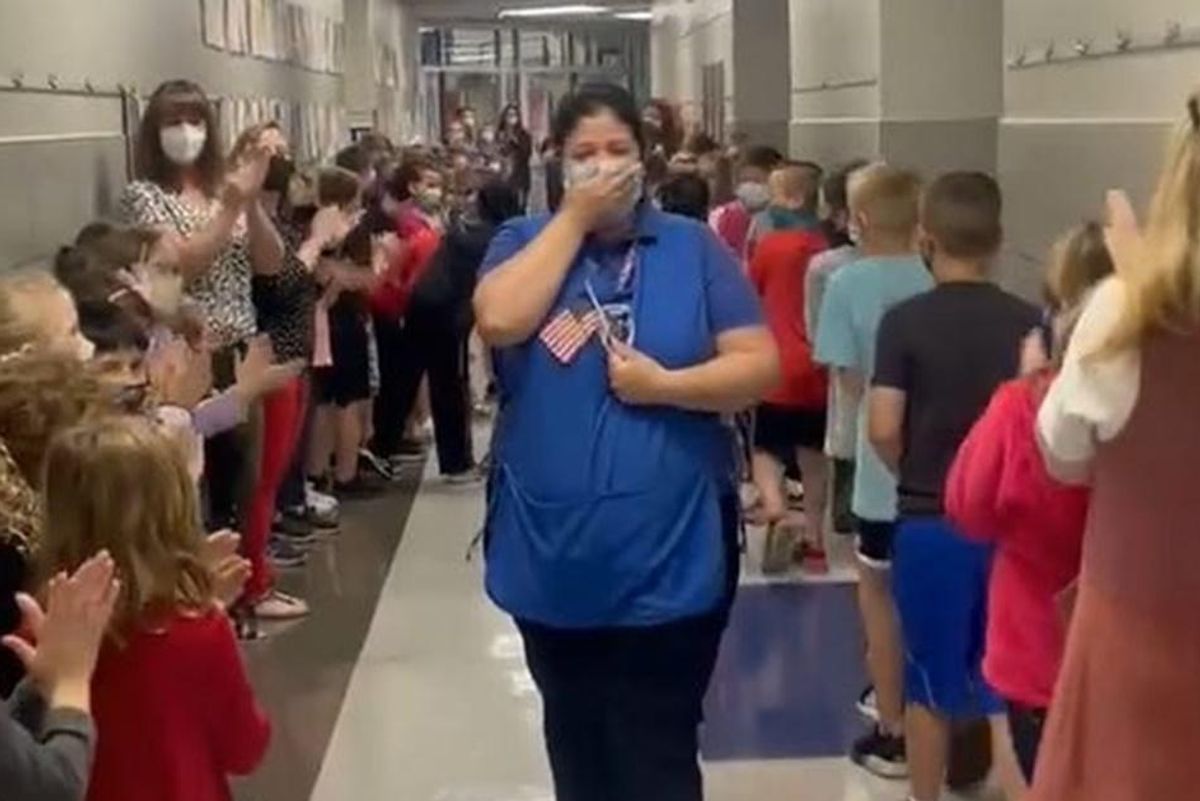 The students and staff at Deer Creek Prairie Vale Elementary School in Edmond, Oklahoma shared an inspiring video on Facebook Tuesday showing the joy of what it means to become an American citizen.

The students and staff lined the hallways of their school cheering on cafeteria manager Yanet Lopez and chanting, "U.S.A.," "U.S.A.," after she passed her test to become an American citizen.

Lopez is an immigrant from Cuba who moved from Houston, Texas to Oklahoma to find better job opportunities.

Passing the citizenship test was a lifelong dream for Lopez. "When I was a child, I have a dream like, say, Martin Luther King, right? My dream was (to) come here to this great country," Lopez said according to ABC.

Lopez passed the test along with her whole family, including her husband and three children, ages 17 to 28.

"Every morning, Ms. Yanet walks into the office and proclaims 'Good Morning, Pretty Ladies' and with a smile and a laugh, she always starts the day with a positive message!" the school wrote on Facebook.

"I am so excited for Ms. Yanet and the realization of one of her dreams in passing her citizenship test! We laughed that she would know more than those of us born in the U.S. I am honored to work with one of the best U.S. citizens I know," the school added.

The video also shows that even though the country has gone through an era of politics where immigrants faced a lot of demonization, the average American still has a lot of love in their hearts for immigrants.

It's also a wonderful example of teaching children to celebrate those who sacrifice to come to America for a better life.

A recent poll by Gallup found that the number of Americans who want an increase in immigration has increased is to its highest point since 1965.

"Thirty-four percent of Americans, up from 27% a year ago, would prefer to see immigration to the U.S. increased," a poll from 2020 found. "Meanwhile, the percentage favoring decreased immigration has fallen to a new low of 28%, while 36% think it should stay at the present level."

The poll found that when asked if the numbers should increase, decrease or stay the same liberals, were much more likely to approve of higher numbers of immigrants than conservatives

But when Gallup asked a slightly less political question it found that most Americans, in general, approve of immigrants.

"Nearly 8 in ten (77%) Americans think immigration is a good thing for their country," Gallup said. "When measured in this more general sense, public support for immigration shows far less of a partisan divide, and both parties express a more generally positive view of immigration."

Celebrating immigrants is also a way to remind ourselves that we live in a country that is still seen as a place of hope and opportunity for most people in the world. It's an opportunity to forget about all of the partisan bickering and focus on the true strengths of our country.

From Your Site Articles
Related Articles Around the Web
education
Culture