He's an actor on one of TV's biggest comedies. He's also undocumented. 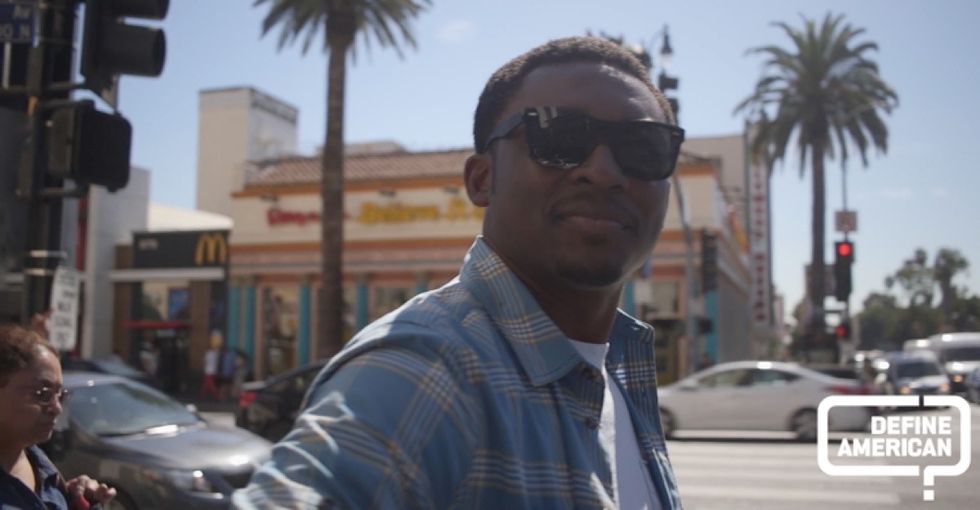 Bamba's toddler daughter happily babbles in the backseat. It's clearly been a fun afternoon with dad. My phone rings exactly 15 minutes later. Bamba is a man of his word.

Bamba is a father, husband, and actor.

You may have seen him in a recurring role on the NBC comedy, "The Good Place," and he'll be in the new Marvel film "Black Panther" in February. At 35, Bamba has built an impressive career for himself, and his star is on the rise. Which is why his next big decision comes as somewhat of a surprise.

Bambadjan Bamba is a father, husband, actor, and an undocumented immigrant — a fact he's making public for the first time.

Bamba was born on the Ivory Coast. After years of tumultuous political unrest and upheaval, his family left for America where they applied for political asylum. Bamba arrived in the South Bronx at 10 years old and didn't speak a word of English. Television shows and hip-hop music helped him master the language, he says. But he made new friends and had a childhood much like anyone else's in his new home. He was even homecoming king.

"I consider myself American," he says. "I'm as American as it gets. I love this nation. I really trust that the people definitely love me back."

Bamba didn't know much about his immigration status until he started applying for college. That's because while Bamba lived a typical American childhood, his parents wrestled with the immigration process. After applying for asylum and waiting years for a response, the family was denied. The Bambas then consulted an immigration lawyer to assist them with their case. More than 20 years after the process started, their asylum request was granted. However, by then, Bamba's father had passed away, and Bambadjan was over 21 and married, which affected his status on the application.

While he'd been a rider on the request every single time, when it finally went through, he was left off.

Bambadjan is officially undocumented, but protected under the Deferred Action for Childhood Arrivals policy, better known as DACA.

Established under the Obama administration in 2012, DACA allows some who arrived in the U.S. illegally as minors to receive a two-year deferred action from the deportation, which also makes them eligible to attend school and receive a work permit. More than 800,000 people are enrolled in the program.

However, on Sept. 5, 2017, Trump announced he was rolling back DACA, putting thousands of individuals and families at risk.

"When it happened, honestly, I was shocked," Bamba says.

After serious backlash to his initial announcement — as many beneficiaries entrusted the government with information about themselves and their families in the hopes it would not be used against them — Trump said he'd revisit DACA in six months, unless Congress "fixes" it sooner. That's left many people like Bamba in serious limbo.

That's why Bamba is coming out as undocumented and sharing his immigration story.

By every measure, people enrolled in DACA, also known as "Dreamers" after the DREAM Act bill, are an asset to this country. In a survey of approximately 3,000 DACA enrollees, 90% of respondents were employed. Without DACA, the United States stands to lose $460 billion in gross domestic product over the next decade. That's just one of the reasons 56% of registered voters feel Dreamers should be allowed to stay.

"We're your neighbors. We're teaching your kids. We're everyday people trying to provide for their families," Bamba says. "That way Americans can say, 'Hey I don't know an undocumented person,' but hey, you know me. And you know the hundreds of others who are sharing this story every day."

But even if DACA is saved, what of the millions of immigrants who reside in this country who aren't covered under the program? Bamba's family is the perfect example that the process can take years — even when everything is done "the right way." The system is broken.

"There are millions of people here, who are basically second-class citizens, who are hiding in the shadows, who are being exploited ... who are fleeing war, who are fleeing persecution," Bamba says. "The same way Europeans back in the day came to America for shelter and protection, America is still a land of liberty. America has to accept those people. Just because they're from different places now, doesn't mean they don't deserve the same kind of protections, the same kind of opportunities to live the American dream."

Before we part ways, I can't help but ask Bambadjan what his personal "good place" looks like, a corny nod to his hit show (which was just renewed for a third season). He indulges me.

"My good place really looks like an Earth with no evil," he says. "We can do anything we want, but ... there's complete trust. There's just freedom to be happy, to do what you love and not worry about someone having to kill you or chase you down. A place where there's no more fear."

His daughter babbles in the background, as if to cheer him on. She's the reason he works hard and loves hard. And with DACA in limbo, Bamba will have to fight hard too. But for now, this sweet family will enjoy the afternoon and work to make their good place a reality.

Get to know Bambadjan as he shares his story for the first time in this powerful video.

If you think Hollywood should stand with immigrants, sign this petition and join the movement with Define American.