Cyntoia Brown, who murdered her sexual abuser at 16, released from prison and will now help other girls like her 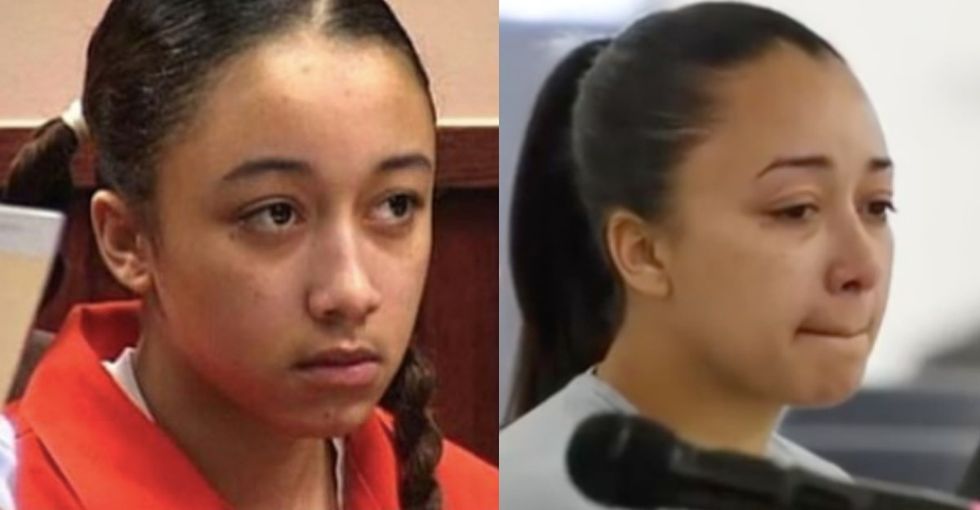 Update: Cyntoia Brown has been granted full clemency and released from prison after serving 15 years for killing a man who bought her for sex at age 16.

Brown requested no media availability on the day of her release (smart girl), but released this public statement:

"While first giving honor to God who made all of this possible, I would also like to thank my many supporters who have spoken on my behalf and prayed for me. I'm blessed to have a very supportive family and friends to support me in the days to come. I look forward to using my experiences to help other women and girls suffering abuse and exploitation. I thank Governor and First Lady Haslam for their vote of confidence in me and with the Lord's help I will make them as well as the rest of my supporters proud."

Welcome back to freedom, Cyntoia.

Brown's case has tested the limits of our justice system and gained the attention of criminal justice reform advocates and celebrities alike. Here's a rundown of the basics of her case:

Brown was born to a mother who abused drugs and alcohol and placed her up for adoption. As a teen, Brown ran away from her adoptive family and was taken in by a pimp who raped her and forced her into prostitution. In 2004, a 43-year-old real estate agent, Johnny Allen, paid $150 to have sex with Brown—then 16—and took her to his home.

Brown claims that she thought the man was going to kill her, so she shot him. Prosecutors claim she killed the man in his sleep in order to steal from him, as she took money, firearms, and the man's car when she fled the murder scene.

Despite being a minor and an alleged victim of sex trafficking, Brown was tried as an adult, found guilty of murder, and sentenced to life in prison. Under Tennessee law, her first chance at parole would not arrive until 2055—when Brown would be in her late 60s.

But as one of his final acts in office, Tennessee governor Bill Haslam has granted Brown full clemency. Brown was released from prison on August 7, 2019 and will live under supervised parole for ten years.

Brown's case raised important questions about how we administer justice when convicted criminals are victims themselves—especially when they are underaged.

RELATED: This real-life hero dove into the child sex slave trade so he could rescue kids from it

There is no question that Brown killed Allen. The question is how she should pay for that crime when she was legally a child at the time and the victim of multiple crimes herself. At 16, Brown was under the control of a violent pimp known as "Kut Throat," who raped her himself and was trafficking her for sex. The age of consent in Tennessee was (and still is) 18, so Allen was guilty not only of soliciting Brown as a prostitute, but also of raping her.

Should a child who has been exploited and victimized in so many ways pay the same price as an adult? In a truly just system, would a child who was the victim of heinous crimes not be granted some grace for killing someone who played an active role in her victimization?

These are the questions about Brown's case that drew advocates from across the social justice landscape to defend her as a sex trafficking victim, including Rihanna, Lebron James, and Amy Schumer.

Brown says she will use her freedom to help young girls avoid finding themselves in situations like hers.

Governor Haslam said in a statement regarding his clemency order:

“Cyntoia Brown committed, by her own admission, a horrific crime at the age of 16. Yet, imposing a life sentence on a juvenile that would require her to serve at least 51 years before even being eligible for parole consideration is too harsh, especially in light of the extraordinary steps Ms. Brown has taken to rebuild her life. Transformation should be accompanied by hope. So, I am commuting Ms. Brown's sentence, subject to certain conditions."

Those conditions include undergoing counseling, getting a job, and completing community service hours.

RELATED: 5 myths about putting people in prison and what actually works

Brown has spent part of her 15 years in prison studying, earning excellent grades in her courses, and is slated to complete her bachelor's degree from Lipscomb University in May 2019.

In a statement, Brown said, “Thank you, Governor Haslam, for your act of mercy in giving me a second chance. I will do everything I can to justify your faith in me." She also thanked "those at the Tennessee Department of Corrections who saw something in me worth salvaging..."

Brown hopes to make a difference in the lives of girls who may find themselves in circumstances like hers. "With God's help, I am committed to live the rest of my life helping others, especially young people," she said. "My hope is to help other young girls avoid ending up where I have been."

Imprisonment is meant to keep civilized society safe from dangerous criminals. Clearly this woman is not a danger to society, and keeping her behind bars would be a gross misuse of our justice system. Kudos to Governor Haslam for doing the right thing, and best of luck to Ms. Brown with her newfound freedom.

On the big comeback weekend, people flocked to social media to share images and videos of their free treats, including festive Halloween cookies (because who doesn’t love TJ’s holiday themed items?) along with hopeful messages for the future.
Keep ReadingShow less
internet
Health