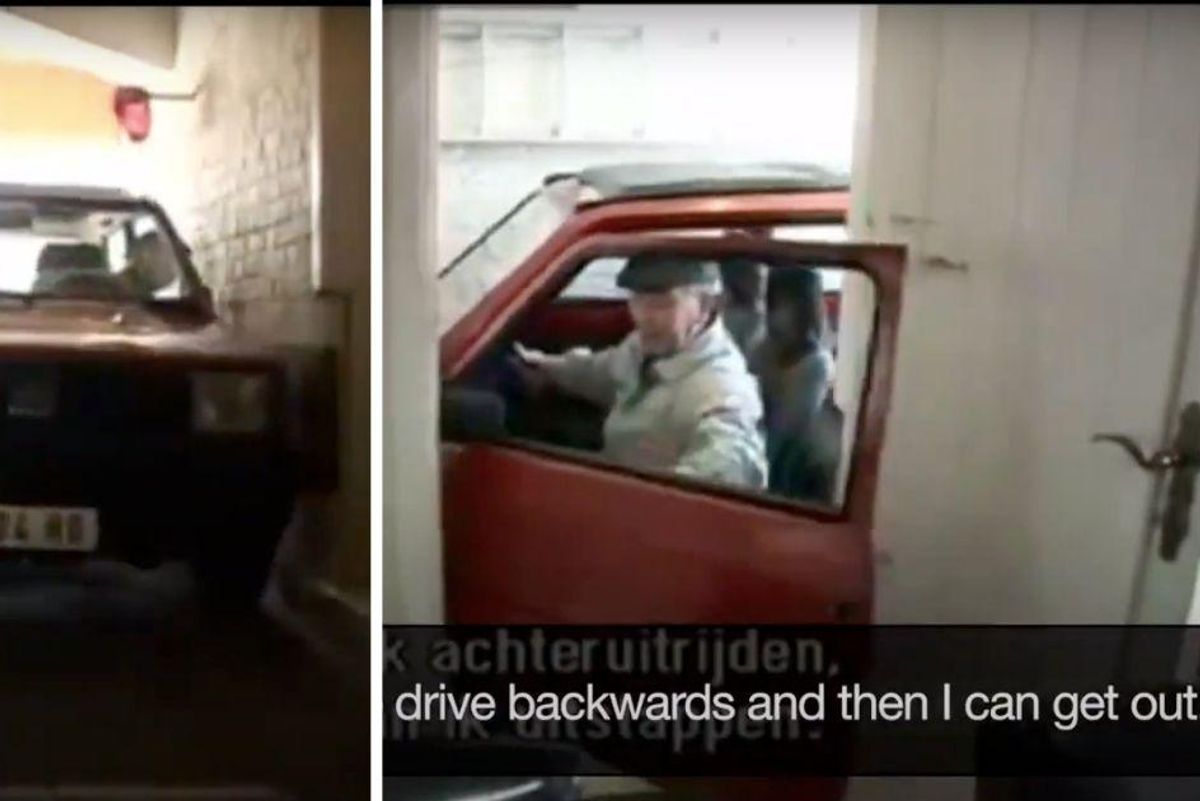 Anyone who has ever parked in a downtown parking lot in a big city knows what a harrowing experience parking in a cramped parking space can be. I once parked in an underground grocery store parking lot in downtown L.A. and a stunning white Bentley convertible—a car that probably cost more than my house—squeezed into the spot next to me. After carefully opening my car door and maneuvering between our vehicles, I marveled at how close the driver had come to scratching his pearlescent white paint off the car and onto on a concrete column.

Either the driver was extremely skilled or extremely lucky. But he likely wasn't an expert a parker as 87-year-old Eugene Breynaert, a Belgian man who spent six decades parking his car in a garage barely wider than his vehicle.

With six centimeters of clearance—about 2.5 inches—you might wonder why he even bothered to use the garage at all, but Breynaert got it down to a science. First of all, he lined the garage with foam at the height of the car's widest spot. Second, he closed in his mirror. And finally, he took it really, really slowly.

While the parking itself is quite a feat to witness, what comes next is even more compelling. As the camera shows him pulling into this teeny garage, the question arises—how the heck does he get out?

It's hardly a process that can be described, but it involves rolling down a window, opening two doors, backing up, getting out, pushing the car forward from outside of it, then shutting the doors to both the car and the house.

You just have to see it:

The video originally went viral back in 2010, but has resurfaced on Twitter and YouTube this week. It's hard to imagine a video about parking a car being so riveting, but strangely, it is. Maybe it's because so many people are bad at parking, or maybe it's because we never in a million years imagined a scenario like this one. Clearly, this space was not designed to be a garage for parking a car. A motorcycle, sure, but definitely not a car.

It appears Mr. Breynaert passed away in 2016 at the age of 94. The Belgian news announcement, which referred to him as "the best driver in all of Liedekerke" said that he continued driving right up until his last days.

Oddly enough, Breynaert's impressive parking job isn't the only viral parking story this week. Gareth Wild of the U.K. shared his meticulous process for tracking parking spots he's used at the local supermarket in an attempt to park in every spot, and people are enamored by it.

I live in Bromley and almost always shop at the same Sainsbury’s in the centre of town, here’s a satellite view of… https://t.co/cA0SOVpbw8
— Gareth Wild (@Gareth Wild)1619513430.0

Perhaps it's his attention to detail and the amount of work he put into tracking how he parked his car, or perhaps people really are this bored during the pandemic, but Wild's thread has gotten wild attention.

Rather than walking around the car park counting each space and exposing myself as a lunatic, I used the overhead v… https://t.co/rBbZGe2gR8
— Gareth Wild (@Gareth Wild)1619513431.0

This wasn't just a casual "Hey, I think I'll try to park in every space" kind of deal. He made vector images and color-coded the spaces.

I don’t own a motorcycle and I’m not disabled but I do have children so I can legitimately use the family spaces. T… https://t.co/I1rSyjDQuW
— Gareth Wild (@Gareth Wild)1619513433.0

He planned it all out mathematically.

To make it easy for me to identify which space I was parking in I assigned each ‘block’ a letter and within each bl… https://t.co/ZHVmzYWRAp
— Gareth Wild (@Gareth Wild)1619513435.0

It took him SIX YEARS, folks. But he managed to park in every space that he was legally allowed to park in.

For anyone keen on taking a pilgrimage to the Bromley Sainsbury’s car park to bathe in my glory I’ve also marked ou… https://t.co/UwC01nF0yz
— Gareth Wild (@Gareth Wild)1619513438.0

He also went a step further and marked the best and worst parking spots for other people.

So many questions. How does a human being decide to do such a thing in the first place? What compels them to stick with it for six years? What of the 120,000 people who liked the thread on Twitter? Are they all equally fastidious data trackers, or are they not data people at all and are just amazed that someone would do this? Are there really this many parking enthusiasts in the world?

Apparently so. Who knew parking could be so compelling?