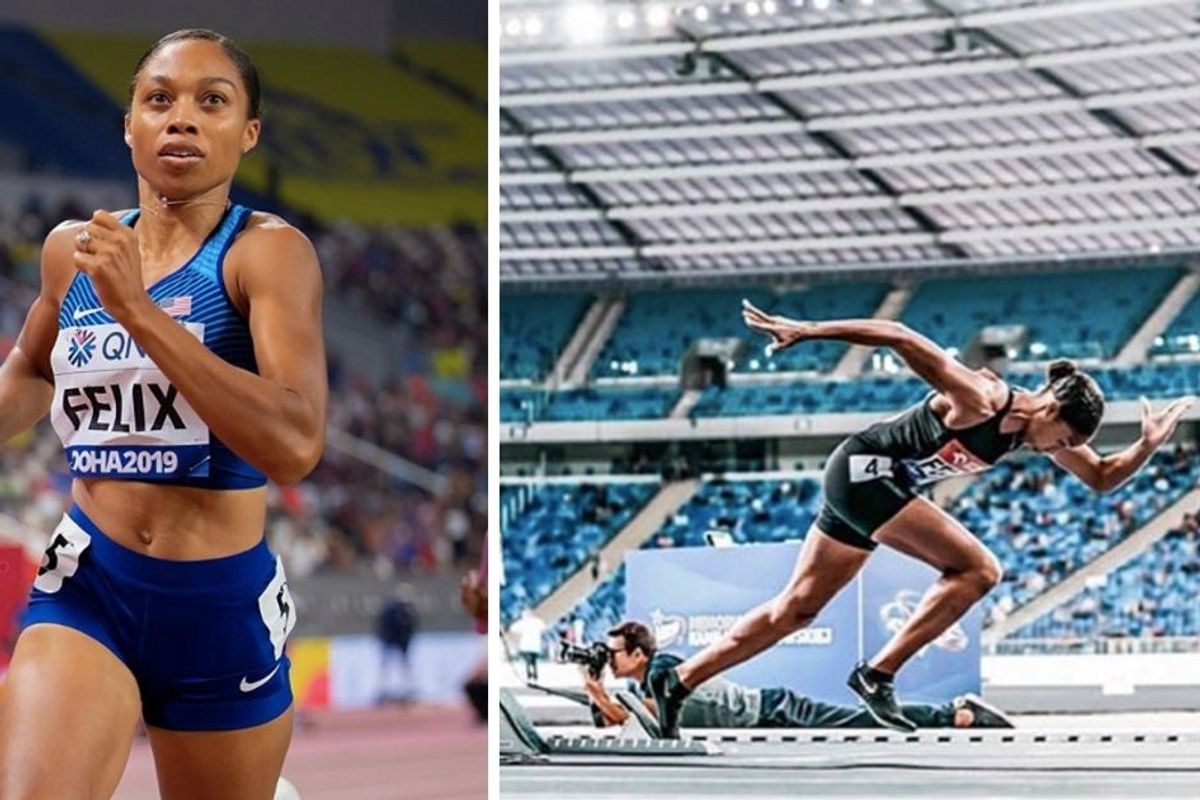 Many moms lament how long it takes to "get their bodies back" after giving birth, and most of us find it more of a distant wish than a doable reality. Who knew that building a human practically from scratch and then extracting it from your body would take its toll?

However, one mama has turned that notion on its head completely. After winning her 12th World Championship gold medal in the mixed-gender 4x400m relay, runner Allyson Felix has beaten the gold medal count record she co-held with Usain Bolt. But the real kicker? She did it just 10 months after giving birth to a premature baby via emergency c-section.

There are not enough superlatives to describe how freaking badass this is.

RELATED: 3 moms recorded their first weeks home with a newborn. It got real — real quick.

During her pregnancy, Felix developed severe preeclampsia (also known as toxemia), a condition marked by excessively high blood pressure and a posing a host of dangers for both mom and baby. According to NBC Sports, Felix ended up delivering her daughter Camryn via c-section on November 28, 2018, at 32 weeks. Born at 3 pounds, 7 ounces, Camryn then spent 29 days in the NICU.

So not only did this 33-year-old Olympic champion recover from a complicated pregnancy and birth and go through the difficulties of having a baby in intensive care, she got herself in good enough shape to break a world record in her sport less than a year later. Unreal.

All the standing ovations for this mama.

Allyson Felix on Instagram: “One foot in front of the other. • Overcoming obstacles is tough. This year I have been learning the importance of just doing the work. It’s…”

On a related note, Felix was part of a group of female athletes who went to battle over their sponsorship negotiations with Nike after becoming pregnant. Felix wrote in a NY Times op-ed in May that the company had wanted to pay her less after she became pregnant. She wrote:

Despite all my victories, Nike wanted to pay me 70 percent less than before. If that's what they think I'm worth now, I accept that.

What I'm not willing to accept is the enduring status quo around maternity. I asked Nike to contractually guarantee that I wouldn't be punished if I didn't perform at my best in the months surrounding childbirth. I wanted to set a new standard. If I, one of Nike's most widely marketed athletes, couldn't secure these protections, who could?

Nike declined. We've been at a standstill ever since.

Felix ended up dropping her Nike deal and signed with Athleta in July. Nike's loss, Athleta's gain. After fierce backlash over the issue, Nike announced in August that it had changed its policy so that female athletes would not "adversely impacted financially for pregnancy" for 18 months—six months longer than its previous policy.

While Felix's performance 10 months after giving birth is remarkable, it also shouldn't be the expected standard. Felix said she "felt pressure to return to form as soon as possible" after her daughter was born, despite the complications in her pregnancy and birth.

Just the act of growing and delivering a baby is a physical feat that deserves praise and admiration. A study on the limits human endurance found that pregnancy demands the same energy levels as an ultramarathon. Seriously.

The truth is that all moms are amazing, whether or not they are smashing gold medal records 10 months after giving birth. And that undeniable truth is what makes Allyson Felix breaking her and Usain Bolt's record all the more impressive.

Allyson Felix on Instagram: “this one is for all my baby mamas🤱🏾 #worldathleticschamps”