All Super Bowl ads are not created equal. 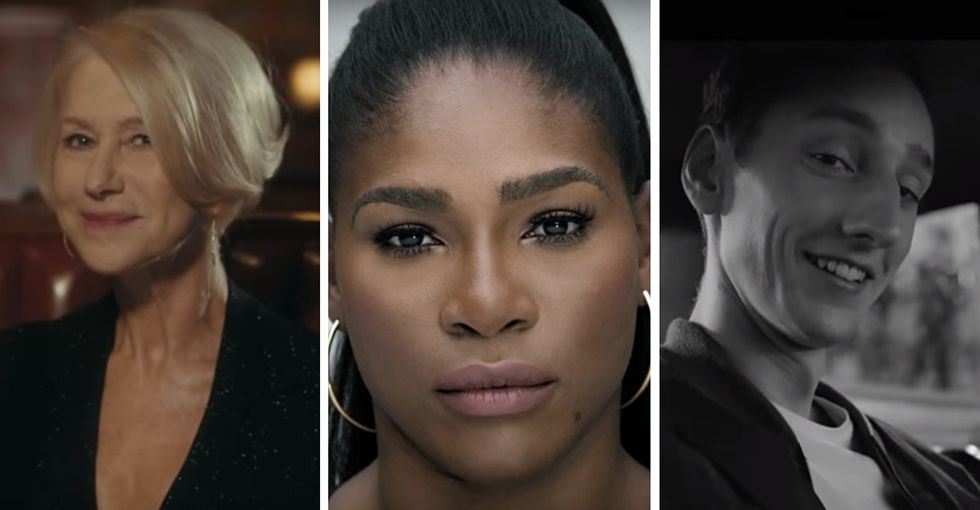 Families gathered around TVs across America to watch the biggest day on the sports calendar Sunday night: the Commercial Bowl.

Yes, a relatively important football game played out between the ads — congrats, Denver Broncos! — but for many of us, Super Bowl 50's real magic happened during the commercial breaks (and when Beyoncé slayed the halftime show in powerfully political fashion).

While plenty of the commercials deserve a thumbs up for a variety of reasons, here are five especially powerful ones that had important messages that last long past their air time:

1. NFL dads helped their daughters do their hair. It was adorable, and important.

Turns out, braiding your kids' hair can be a bit tricky — even if you're an NFL star. Take Pittsburgh Steeler DeAngelo Williams. He may be a beast on the football field, but even he struggles to understand "why they make ... barrettes so complicated."

Williams was one of three NFL stars who were part of Pantene's "Strong Is Beautiful" ad, encouraging fathers to spend quality time with their daughters. After all, dads can play a big role in shaping their daughter's self-esteem. If even just one dad penciled in some quality time with their young one after watching, I'd say the (millions of) ad dollars spent by Pantene was worth it.

2. Helen Mirren slammed drunk drivers in hilarious fashion. But the message was about more than a laugh.

She was featured in an ad-meets-PSA for Budweiser that attempted to put drunk drivers in their place — and that place is anywhere but the driver's seat. Because, laughing aside, drunk driving's no joke; on average, it kills about 27 people in the U.S. every day.

Take a hint from snarky Mirren: Take a cab. Crash at a friend's. Do anything except drive drunk.

3. Serena Williams and Abby Wambach want you to think outside the box when it comes to cars (and life).

A "chick" car. A "gay" car. A "cute" car. A "slow" car. Mini Cooper doesn't care what you call the car, apparently — they just want you to find your ride.

In its ad featuring tennis queen Serena Williams and openly gay soccer champ Abby Wambach, viewers were challenged to "defy labels" when scoping out their next vehicle. Because who wants to fit into a box, anyway? It's a clever message that applies to cars ... and basically everything else in life.

Side note: It is super refreshing to see women — who aren't being objectified — in car ads. More of that, please.

4. The No More campaign reminded viewers domestic abuse doesn't take a break for the Super Bowl. In fact, the opposite can happen.

Not every Super Bowl commercial was all fun and games. For what was probably the most gripping ad this year, the No More campaign aired a 30-second spot encouraging folks to recognize the signs of domestic violence amongst their loved ones and speak up when a friend or family member needs them.

The ad was a powerful reminder that domestic abuse doesn't pause for an evening of celebration like the Super Bowl — in fact, some research suggests domestic abuse can even spike around large-scale sporting events. On average, about 24 people per minute fall victim to violence, rape, or stalking by a partner in the U.S.

It's no news the NFL has taken (much-deserved) heat in recent years for failing to properly handle domestic abuse cases among its players. And some have pointed to No More's Super Bowl PSAs — which came to be through the group's partnership with the NFL — as more of a public relations maneuver for the league as opposed to an authentic commitment to help curb domestic violence. There's probably some truth to that.

Still, one 30-second spot is better than nothing when it comes to shedding light on such a critical issue. As the PSA notes, you can text HELP to 94543 if you're in need of support.

5. A body spray commercial kicked the backward ways we perceive masculinity right to the curb.

Remember all the Axe ads that implied their body spray could turn bros into chick magnets? Yeah, they were obnoxious.

The bad news: You'll probably never be able to completely erase all of that objectification from your memory. The good news: Axe has finally grown up, and its new ad shows it.

In the Find Your Magic campaign, Axe Grooming encourages guys to be themselves, free of all those real man stereotypes that prove just how fragile masculinity can be. In the spot, guys who, say, love their large nose or flaunt their big brains or rock their high heels on the dance floor are the new faces for the brand — not shirtless dudes with six-packs.

"Who needs some other thing, when you got your thing?" the narrator asks in the spot, which has garnered praise for its inclusiveness. Clearly, Axe has gotten the memo: Authenticity is in. Conforming to backward gender norms? Not so much.