This adorable daddy-daughter Super Bowl ad will give you all the feels.

Watch these NFL players give the 'dad-do' to their daughters. 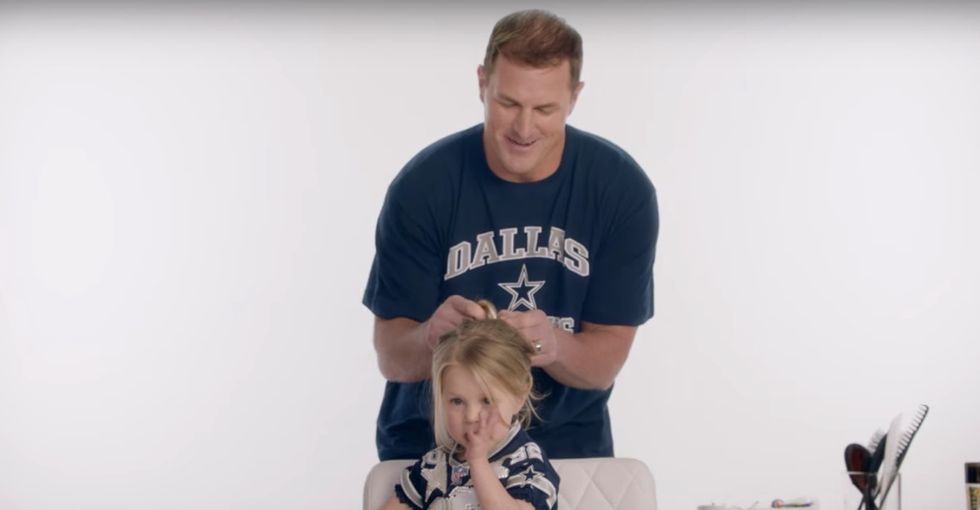 We know that football players rely on toughness to make it through a season. Now a few of them are going to face their toughest challenge yet.

It doesn't matter if you're a mom or dad. Styling your daughter's hair can be pretty challenging.

And it's easy to forget that a lot of NFL players — giant men who run into other giant men for a living — are also dads. They have lives at home. Many of them are even raising tiny female humans who have hair that needs taming.

So Pantene stepped up its game by inviting three NFL players to style their daughters' hair for its "Strong Is Beautiful" campaign for its upcoming Super Bowl commercial.  Here's how it went down.

First up was DeAngelo Williams from the Pittsburgh Steelers and his daughter Rhiya.

Rhiya was ready for her daddy to do his thing. Images via Pantene/YouTube.

He struggled a bit in the beginning and admits that carrying a football is easier than styling hair because "I have help running through that defensive line."

He persevered, and Rhiya was pretty pleased with the results.

Next was Benjamin Watson of the New Orleans Saints and his daughter Grace.

Grace was ready for her chance to sit in the hot seat.

Grace expressed that she was excited and a bit nervous, but Benjamin was ready to dive in.

"It's fun to do something new and spend this time with my daughter," he said.

After a little bit of time, Grace was styled up in a pair of twin braids and was happy with the results.

Last, but not least, was Jason Witten of the Dallas Cowboys and his daughter Landry.

Jason is known for his great hands on the football field, but how "great" are they when it comes to styling Landry's hair?

Jason admits that Landry's mom has the skills when it comes to making her hair look pretty. He also readily admits that "catching a touchdown pass is easier than creating a beautiful braid."

Of the three dads, Jason probably struggled the most — but props to the dude for sticking with it.

The end result? Adorable pigtails for his adorable little girl.

That is one happy toddler.

At the end of the day, little girls care more about the quality time they spend with their daddies than the hairdos created for them.

Yes, this is an absolutely adorable commercial, and I wouldn't fault anyone for experiencing a severe case of sweaty eyeballs after watching it, but a deeper message shouldn't be ignored.

The role that dads play in the lives of their daughters in terms of their self-esteem, body image, and future relationships is huge. Kudos to Pantene for recognizing that and putting this message on display for millions of viewers to watch.

Speaking of watching, you can check out a sneak peek of the commercial here.