12 captivating pics that sum up what happened this week around the globe.

Did you miss the news this week? I got your back. 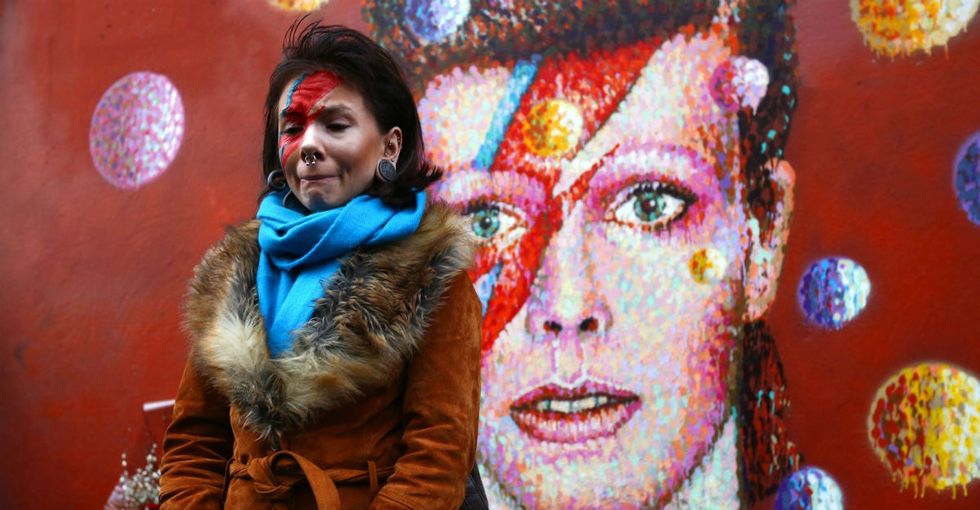 Whether you missed the big headlines this week because you were busy living your own life (YOLO!) or you simply needed a break from the 24/7 news cycle (believe me, I get it), don't worry — I got you covered.

Here's this week in news, in 12 captivating photos.

1. The "British Forrest Gump," who'd had a bad case of wanderlust, completed a 10,500-mile journey on foot.

Jamie Ramsey finally made it home to Britain on Jan. 10 after running from Vancouver, Canada, to Buenos Aires, Argentina. It took him roughly 17 months to complete the cross-continental trek, and he raised a boatload of money for charity along the way.

2. The world said goodbye to one of music's all-time greats, Mr. David Bowie.

A fan mourns Bowie's death near a mural of him in London. Photo by Chris Ratcliffe/AFP/Getty Images.

Bowie died of cancer on Jan. 10 at the age of 69. The world took a moment to remember how he profoundly changed the music industry in more ways than one.

And, of course, Bowie wasn't the only beloved British entertainer lost to cancer this week. On Jan. 14, the world learned that Alan Rickman had died in London.

3. President Obama confessed one of his "few regrets" during his final State of the Union address.

“It’s one of the few regrets of my presidency — that the rancor and suspicion between the parties has gotten worse instead of better,” Obama said in Washington on Jan. 12. Sure, a lot of things have improved on Obama's watch (job creation, LGBT rights, an increase in clean energy use) but bipartisanship isn't one of them.

4. This Hindu holy man had a smoke before taking a dip in honor of Makar Sankranti.

A Hindu holy man, or sadhu, smoked cannabis on Gangasagar Island (also known as Sagar Island) on Jan. 13 in India. He was one of about half-a-million Hindu pilgrims that made the voyage to take a holy dip where the Ganges River and the Bay of Bengal meet in recognition of Makar Sankranti, a holy day of the Hindu calendar, according to Getty.

5. Lawrence Erekosima made ... confetti angels? ... in celebration of his team's big win on the football field.

Roll tide! The University of Alabama's football team knocked off the Clemson Tigers, 45-40, in the College Football Playoff National Championship game on Jan. 11 in Arizona. As seen above, Alabama's #43 Lawrence Erekosima clearly enjoyed the win.

6. This woman used her animal instincts to help protect creatures in China.

A woman dressed up like a giraffe and fed a real giraffe at Songcheng Theme Park in Sanya, China, to promote animal protection, Getty reported. She was just one of 10 others in the park that day who used body paint to send the message to onlookers.

7. Taraji P. Henson snagged a Golden Globe for her role in "Empire" ... and looked great doing it.

Taraji P. Henson won big at the 73rd annual Golden Globes in Los Angeles on Jan. 10. Leonardo DiCaprio, Brie Larson, the creator of "Mr. Robot," and many others all had stellar nights to write home about too.

8. The ocean lost a few of its most magnificent creatures.

Five sperm whales died on Jan. 13 after being beached on the Dutch island of Texel. Rescue teams were unable to save the poor things after they were spotted ashore on Tuesday.

An investor checks out how his country's economy is fairing in Hangzhou, China, on Jan. 11. Stocks over there haven't had the best 2016 so far (to put it lightly). They plummeted after the New Year, as CNBC reported, but seem to be reaching at least a bit of stability in recent days.

10. The National Guard had to step in to help save Flint, Michigan, from poisonous public water (yes, in America).

Two years ago, Flint, Michigan, switched up the community's water supply to save a buck. The decision — which was ultimately the state's — turned out to be a disaster, as residents began consuming poisonous levels of lead. This week — after the National Guard began delivering water to residents (seen above on Jan. 13) and news broke that the failure may be linked to a spike in cases of Legionnaires' disease — community members are (justifiably) furious with Gov. Rick Snyder.

11. A shoe-shaped church (for real) now exists in Taiwan. So, naturally, tourists are all about it.

If you've ever wondered if a glass slipper shaped church exists, well now you know. This one's in the Southwest Coast National Scenic Area of Taiwan — not in Eagleton, Indiana ("Parks and Recreation" reference, anyone?). It'll officially open its doors in February. But in the meantime, these tourists, spotted on Jan. 11, couldn't help but a snap a pic.

Although it may technically be a church, there won't be religious services there, as BBC News points out. It'll mostly be used as a space for weddings. And if you're wondering ... why a shoe? Well, duh — they're trying to attract brides to use the location. Because everyone knows that all women just adore shoes, right? (Smart move, guys.)

12. An artist created this masterpiece gown out of 5,940 ruffles of red paper ... and some elbow grease.

Zoe Bradle completed her ridiculously cool art piece made out of (just shy of) 6,000 ruffles at Sotheby's in London on Jan. 14. (Yes, you're looking at a red paper dress sculpture, not an actual dress.)