'Mr. Robot' took home a Golden Globe, but the creator's speech was the win of the night. 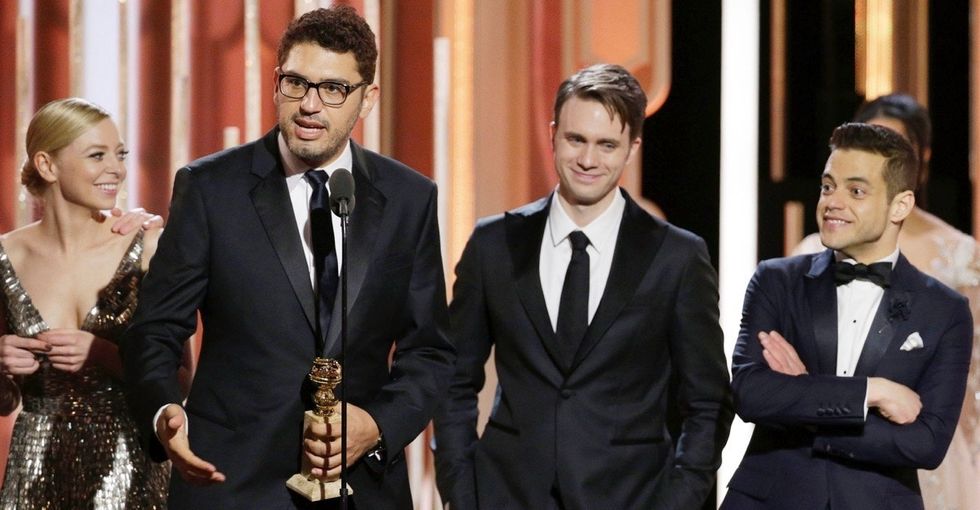 The 73rd annual Golden Globe Awards had much to offer in the way of memorable moments.

From Rachel Bloom's joyful fist pump to Denzel Washington's four-minute advertisement for reading glasses. And who could forget the nudge felt round the world?

But one acceptance speech stood out in the best way and had fans cheering in every corner of the globe.

Ecstatic creator and showrunner Sam Esmail accepted the award, thanking the cast, crew, and his fiancee, actress Emmy Rossum, who introduced him to the show's star, Rami Malek.

Esmail holds the statuette on stage at the Golden Globes. The show's star, Malek, stands on the far right. Photo by Paul Drinkwater/NBCUniversal via Getty Images.

Esmail also took a moment to appreciate his family in the United States and Egypt, saying "shukran," which is "thank you" in Arabic.

It was a seemingly small moment, but for many Arab-Americans hungry for representation, it was one that couldn't come too soon.

Needless to say, fans on social media were beyond excited.

But Arab-German filmmaker and director (and Twitter must-follow) Lexi Alexander may have said it best.

The evening was another poignant reminder about the importance of representation in Hollywood.

If fans want to see more diverse narratives and characters on the small screen, then a major shift needs to occur behind the scenes. As actress Viola Davis said in her passionate acceptance speech at last year's Emmy awards, "You cannot win an Emmy for roles that are simply not there."

So here's to Sam Esmail and the growing band of writers, directors, producers, and executives from traditionally underrepresented groups taking their spot at the table.

They're changing minds, setting new norms, and creating some of Hollywood's most unforgettable characters and stories in the process.

Christian Slater (third from left) also snagged a Golden Globe for "Mr. Robot" for Supporting Actor in a Series Series, Limited Series, or Motion Picture Made for Television. Photo by Photo by Kevin Winter/Getty Images.

Take a minute to watch Esmail's speech in its entirety. Warning, you may cheer/cry without warning.