In his final State of the Union address, President Obama admits a single 'regret.' 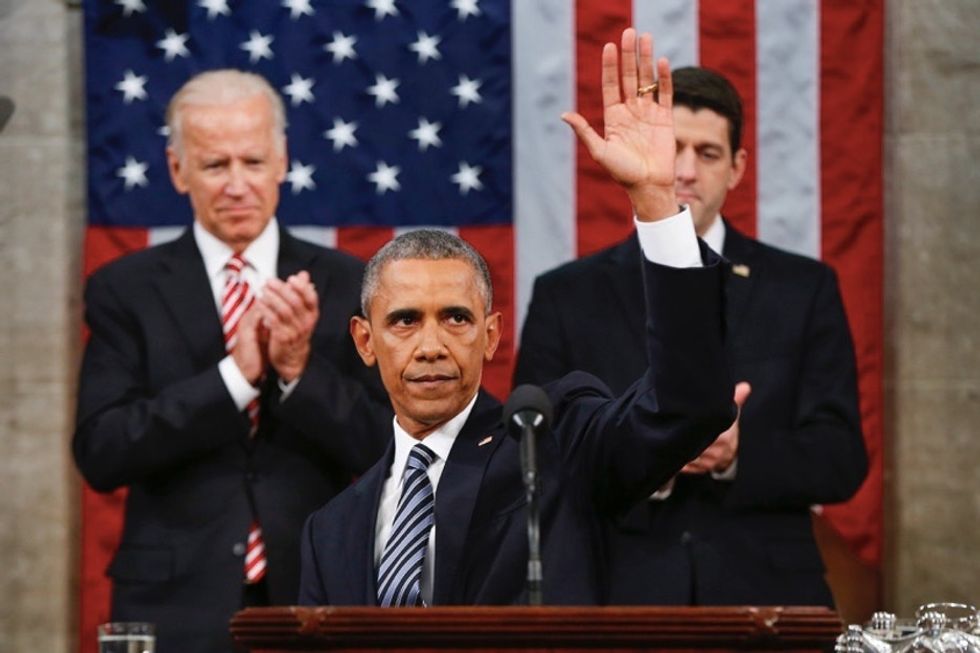 It was full of rousing moments, brutal mic drops, and two appearances of the phrase "pass muster," which gave the whole thing a nice Gatsby feel.

While a lot of important issues were addressed, like terrorism and curing cancer, some were not — abortion rights and police brutality to name a few.

One topic Obama brought up toward the end carried with it his only use of the word "regret."

"Democracy breaks down when the average person feels their voice doesn’t matter; that the system is rigged in favor of the rich or the powerful or some narrow interest. Too many Americans feel that way right now. It’s one of the few regrets of my presidency  —  that the rancor and suspicion between the parties has gotten worse instead of better."

It's not often you hear a president use the word "regret."

He's expressed frustration at gun control and in 2015 said that he wishes he closed Guantanamo Bay on his first day in office.

But for Obama to express regret in his final address, before all of congress and America, is a pretty big deal.

Especially since the issue at the heart of his regret is one we hear about often — divisiveness and partisanship in Congress and in this country.

Americans, more than ever, feel divided and that their voices simply aren't being heard the way they used to.

According to a recent CNN poll, 75% of Americans are dissatisfied with the way the government is being run. That's a huge problem in a country that is supposed to be "of the people."

From billionaire bankers who can crash the economy without spending a second in jail, to corporate CEOs who can buy and sell presidential candidates to unarmed black men being killed by police on sight — and those cops who never see a day in court because of a system of politics that protects them — it's pretty easy to see why people aren't feeling just dissatisfied but completely unmotivated.

Most Americans look at the scope and scale of the problems this country faces and just aren't sure they can do anything about it.

Voter turnout is on the decline in presidential elections, and in local and primary elections, turnout has been abysmal. Not to mention even if people do turn out to vote, politicians have gerrymandered districts, something the president called for an end to in his State of the Union, or as he described it, "the practice of drawing our congressional districts so that politicians can pick their voters and not the other way around."

Once again, in a country that elects its leaders to represent them, this is — to put it lightly — not good.

But there may be one silver lining to this problem, in the form of millennial voters.

According to a poll conducted by Rock the Vote and USA Today, millennial voters (the country's largest demographic) no longer reliably identify as liberal or conservative.

Millennials are more likely to cast their votes based on issues, not candidates, and their political alignments reflect a need for radical systemic change rather than just another party politician.

It might explain why there's so much support for Bernie Sanders, a candidate who, much like Obama eight years ago, many young voters believe carries with him the radical change they're looking for.

On the other hand, it could also explain millennial Republicans' support for Donald Trump, a candidate who also represents an anti-establishment ideology.

Sen. Bernie Sanders, who is surging in popularity just ahead of the Iowa Caucus. Photo by Andrew Burton/Getty Images.

Maybe that's what bridging this almighty divide will look like. Voters turning out to voice their concern on specific issues and candidates who, as a result, have to be representatives of the people first and politicians second. As it should be.

This is what one of the most powerful world leaders, the president of the United States, says he regrets not being able to change in his years in office.

Of course, the president went on to say that he would do his best in his remaining year in office to address this problem.

"There’s no doubt a president with the gifts of Lincoln or Roosevelt might have better bridged the divide, and I guarantee I’ll keep trying to be better so long as I hold this office."

He went on to say that what's necessary is a change of the entire system, an end to practices like gerrymandering that will help us "to reflect our better selves."

But the president's call to action is significant because the people, with a united voice, are one thing that's more powerful than he is.

With an election coming up this year, the voice of the American people has the potential to be louder than it ever has. As the president noted in his closing paragraphs, it's not enough to just sit at home and be frustrated.