When the city painted over this abortion rights mural, artists got creative.

'We can't keep painting over our problems.' 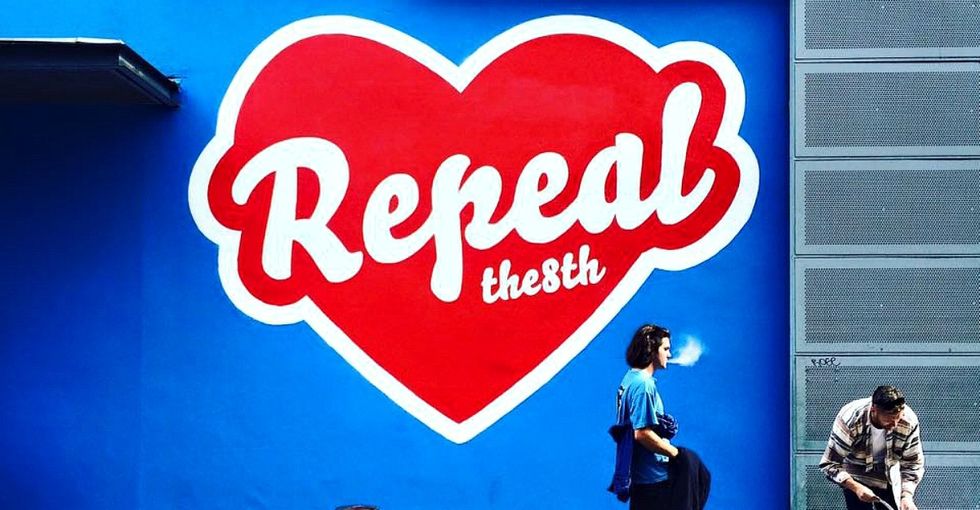 All over Ireland, you can find graffiti murals honoring important historic fights, but few have been as controversial as this one.

Image via The HunReal Issues/Facebook, used with permission.

It's a reference to the eighth amendment of the Irish constitution, which "acknowledges the right to life of the unborn" and is often cited as the origin of Ireland's incredibly strict anti-abortion laws.

"[Ireland has] come from such a Catholic situation, and there’s a lot of scare-mongering involved, the people are afraid to talk about it at all," Andrea Horan, founder of the organization behind the mural, The HunReal Issues, said. "We wanted to put up a piece that would start conversations."

To do that, Horan asked well-known Irish artist Maser to create a mural on the side of Dublin's Project Arts Center (which often sports somewhat controversial artistic messages) in the hope that a public, political statement would gain more attention from the masses.

Was she ever right. People flocked to the mural, sharing photos of it across social media.

Collage of people sharing photos of the mural. Image via The HunReal Issues/Facebook, used with permission.

Not everyone was thrilled by the mural, however.

Angry pro-life organizations went to the city council to demand the mural be removed.

One of the groups even set up a petition online expressing its disgust that taxpayer money was being used to fund this pro-abortion mural agenda, a claim that was totally bogus, according to Horan, because Maser paid for it himself.

Despite many citizens fighting for the mural to remain in place, ultimately bureaucracy won out on a technicality. According to city law, all murals need planning permission before they're created.

Just three weeks after it debuted, the mural was painted over by order of the city council.

Mural removed only three weeks after it was painted. Image via The HunReal Issues/Facebook, used with permission.

Of course, there are hundreds of other murals all over the city that have remained up for years despite not having permission from the city, but none of them support abortion access, so they've been left untouched by bureaucracy.

That's when local artists got involved.

So they fought back, guerilla-style, splashing "Repeal the 8th" hearts on walls and buildings across Ireland.

Dara K, an Irish graffiti artist, did his own interpretation of the mural. Image via Dara K/Facebook, used with permission.

An artist group called the Generic People projected the original mural on a building in Cork ensuring it couldn't be painted over.

Others painted words of solidarity near Maser's other graffiti works:

A bakery even started making donuts in the image of Maser's mural:

Horan has just been blown away by the response.

It's hard to believe that she had only started The HunReal Issues six weeks ago. At the time, she was hoping — but didn't really imagine — that people would get so involved. It just goes to show, when an issue is important enough to a community, a united front of support is an unstoppable one.

"It's amazing to see the efforts people are going through to make the mural visible," she said. "Everyone's just at the bursting point of 'we need to talk about this.'"