What Ethiopian runner Feyisa Lilesa risked with his Olympic protest.

Feyisa Lilesa used his global platform to call for an end to oppression. 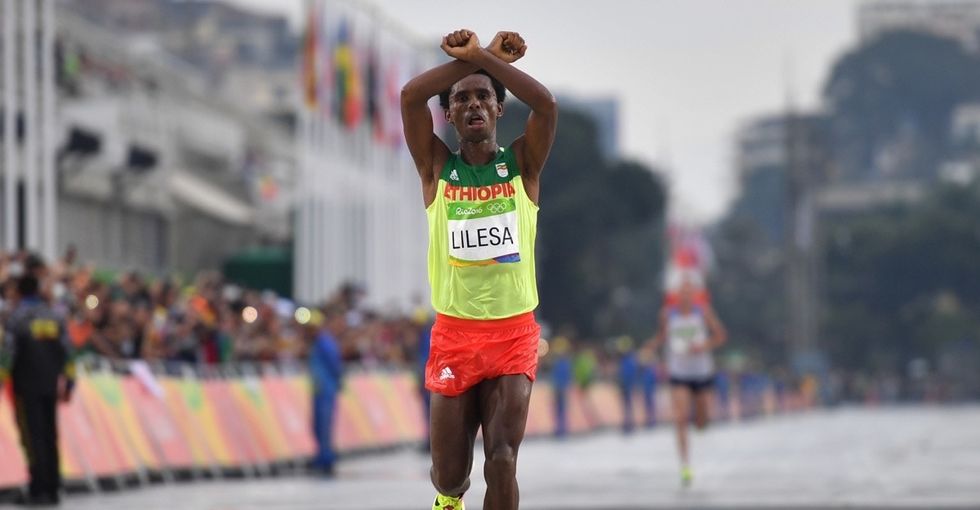 Just as the Rio Olympics were coming to a close after two weeks of memorable moments, one athlete's political protest may go down as the most historically significant of them all.

It's not soon that anyone will forget the performances of Simone Biles, Katie Ledecky, Simone Manuel, or Michael Phelps. Nor will the Olympic firsts for countries like Kosovo and Fiji become diminished victories lost to time. The same goes for the inspiring display of sportsmanship between New Zealand's Nikki Hamblin and the U.S.'s Abbey D'Agostino.

It's the action that Feyisa Lilesa, an Ethiopian runner, took that may have the largest impact outside the sporting world.

During Sunday's men's marathon, as Lilesa crossed the finish line, he held his arms crossed over his head. For much of the audience, this symbol likely didn't mean much. For the men and women of his home country, however, it was a rallying cry.

In Ethiopia, the sign made by Lilesa is a show of solidarity for the Oromo people, the country's largest ethnic group, of which Lilesa is a member.

His protest was meant to draw attention to some of the atrocities being committed against the Oromo by the Ethiopian government.

Since November 2015, an estimated 400 Oromo have been killed by the Ethiopian government. Many more have been injured or arrested.

Human Rights Watch issued a report in June detailing the state-sanctioned atrocities in Ethiopia, which stemmed from last year's decision by the government to seize a section of Ginchi, a town roughly 50 miles southwest of the country's capital.

What was a forest and football field would be razed in favor of a government-sponsored investment project. In response, the Oromo people rose up in protest, which was followed by swift violence.

By participating in such a high-profile act of protest at the Olympics, Lilesa's life may now be in danger.

He hopes that he can obtain a visa to stay in Brazil and eventually find passage to Kenya or the U.S.

Whether or not you're an expert on the oppression facing the Oromo people or the situation in Ethiopia, a man risked his life to draw attention to this issue.

Lilesa could have run the race, accepted his silver medal, and returned home hoping that his status as a sports hero would provide him relative safety. But for the sake of his people, he took action. If his action doesn't bring attention to what is seemingly a horrific abuse of human rights, is it all for naught?

Hopefully, this action, performed before a global audience, will inspire support for his cause.

As for what needs to happen in Ethiopia, HRW has some strong suggestions:

"Ethiopia’s brutal crackdown also warrants a much stronger, united response from the international community. While the European Parliament has passed a strong resolution condemning the crackdown and another resolution has been introduced in the United States Senate, these are exceptions in an otherwise severely muted international response to the crackdown in Oromia. Ethiopian repression poses a serious threat to the country’s long-term stability and economic ambitions. Concerted international pressure on the Ethiopian government to support a credible and independent investigation is essential. Given that a national process is unlikely to be viewed as sufficiently independent of the government, the inquiry should have an international component. Finally, Ethiopia’s international development partners should also reassess their development programming in Oromia to ensure that aid is not being used – directly, indirectly or inadvertently – to facilitate the forced displacement of populations in violation of Ethiopian and international law."

Additionally, HRW urges the country to drop charges against detained protesters, support an independent and transparent investigation into the government's use of force, prosecute those responsible for abuse, and work to restore trust between the Oromo people and the government.

You can help ensure that Lilesa's message doesn't go unheard.

You can learn more about what's happening in Ethiopia; you can share your findings; you can write your representatives in Congress to let them know this matters to you. You can help ensure that his actions weren't in vain.