This is what the Olympics are all about. 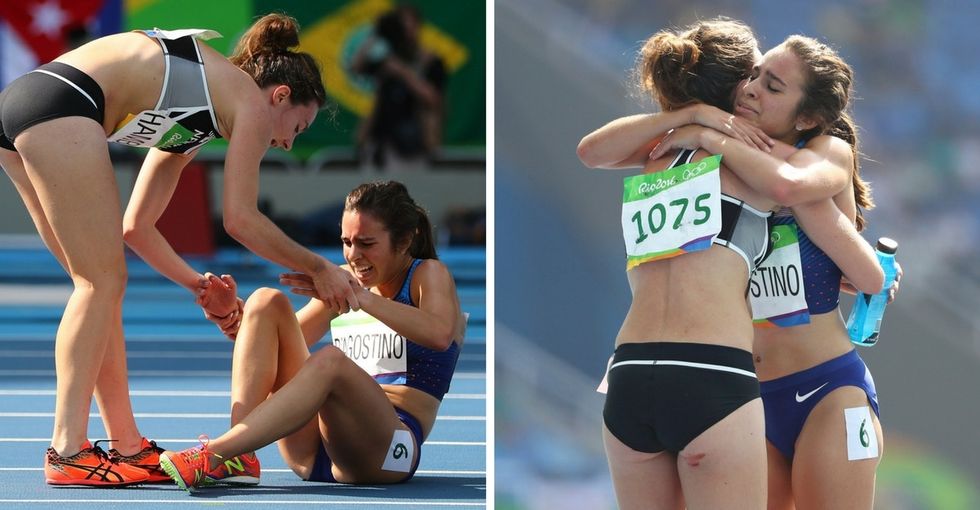 The scene probably felt like something out of a nightmare for Olympic runners Nikki Hamblin of New Zealand and Abbey D’Agostino of the U.S.

The two Olympians were competing in the women's (downright grueling) 5,000-meter race in Rio de Janeiro on Aug. 16, 2016, when they got tangled up on the congested track.

Hamblin fell, and D'Agostino — who was right behind her and unable to avoid a collision — tumbled to the ground as well.

But instead of continuing onward right away, D'Agostino got to her feet, then stopped running. She checked to make sure Hamblin made it back onto her feet as well. And that, in itself, was noteworthy in a competitive Olympic event.

However, that's only half the story.

D'Agostino twisted her right knee in the collision. And although she began running again, the pain came back.

A few moments after the runners' initial impact, D'Agostino stopped due to the pain, collapsing on the bright blue track again.

This time, though, it was Hamblin's turn to lend her a helping hand.

D'Agostino and Hamblin — the last two athletes to finish the race — sacrificed better finish times to make sure the other was OK.

It certainly wasn't easy as D'Agostino staggered her way through portions of the remaining laps cringing in pain.

But the two runners showed the world that gold, silver, and bronze take a backseat to good sportsmanship.

"That girl is the Olympic spirit right there," Hamblin said of the American runner after the race had ended.

"Regardless of the race and the result on the board, it’s a moment that you’ll never, ever forget for the rest of your life. There’s going to be that girl shaking my shoulder, saying, 'Come on, get up.'"

Even better, after both athletes crossed the finish line, they got some great news about their final results.

As it turns out, both the U.S. and New Zealand argued the accidental collision affected the runners' results, The Washington Post reported. Race officials agreed.

So both D’Agostino and Hamblin learned they'd be allowed to run in the final on Aug. 19, 2016 (assuming D’Agostino's knee is in good enough condition to compete).

Rio 2016 may not have gone according to plan for the American and Kiwi. But sometimes the best memories are the ones we least expect.

"I’m never going to forget that moment," Hamblin said. "When someone asks me what happened in Rio in 20 years’ time, that’s my story."