This autistic 10-year-old wrote a short story, and people are loving it. 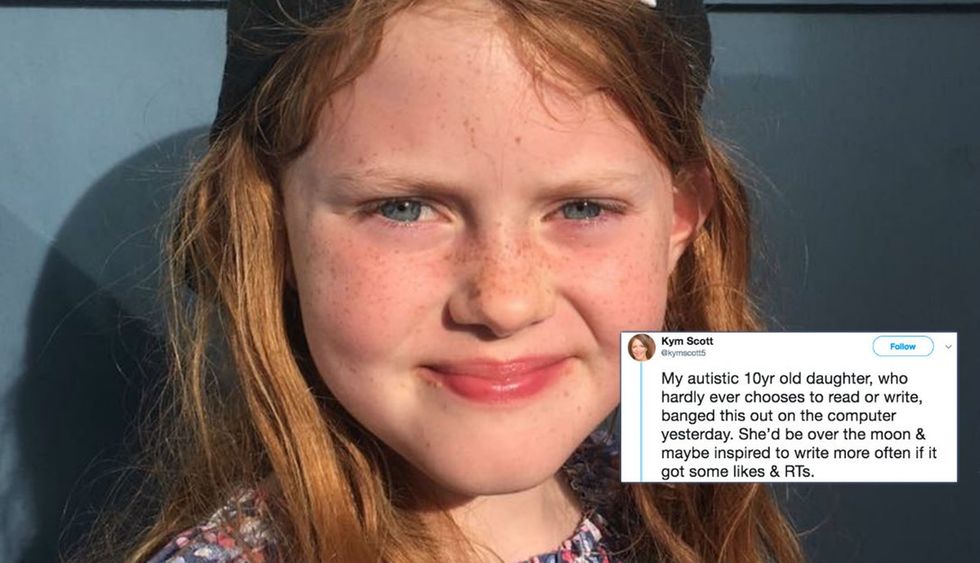 Libby Scott's mom Kym said her 10-year-old daughter "hardly ever" would chose to read or write.

Libby has autism, and her mom said part of the symptoms include rarely reading or writing.

So when Kym saw that Libby had written a fictional short story, she wanted to rally support for her.

In just a few hundred words, Libby describes a fictional character's struggle to get through her day and the difficult interactions she has with strangers who aren't aware of her condition or how to interact with her.

"I notice that my candles are in the wrong order; the cleaner must've done it," the character says. "I think to myself I don't want to get up as I am so comfortable. I reluctantly climb out of bed to adjust my candles."

Libby's character finds comfort in a song until she becomes upset by the word count and reaches out to Taylor Swift.

"The next morning I realise my favourite song doesn't have exactly 100 words, it has 98. My heart stops," she writes. "A few hours later I find myself writing to the singer telling her how I felt. I got a reply from her saying 'I am sorry but I cannot change the lyrics of my song, lots of love Taylor Swift.'"

My autistic 10yr old daughter, who hardly ever chooses to read or write, banged this out on the computer yesterday.… https://t.co/pxNBJFgmOi
— Kym Scott (@Kym Scott)1531677484.0

Through this fictional character, Libby discovered a way to explain a part of her own experience having autism.

And Twitter users swiftly responded with praise. What started as a simple gesture of support quickly went viral. In less than 48 hours, more than 40,000 people had liked Kym's tweet and nearly 20,000 had retweeted it.

"I had no idea my little bit of writing would go so far, but I’m really excited and pleased," Libby says. "Especially if it helps people see a different viewpoint of autism and if it can help them understand a family member better."

Alan Gardner, a TV presenter in the U.K. with autism, had some simple and poignant praise for how Libby was helping others.

Children's author Ann Cleeves chimed in as well with some words of support that would mean a lot to any writer, let alone a 10-year-old putting her work out into the world for the first time.

@kymscott5 This is wonderful. My granddaughter is autistic too. Please pass on congratulations from a fellow writer.
— Ann Cleeves (@Ann Cleeves)1531752205.0

Libby even received praise from the head of Condé Nast International, one of the most powerful publishing operations in the world.

@kymscott5 Kym, this is brilliant! I hope your daughter keeps writing and that we can read more from her.
— Wolfgang Blau (@Wolfgang Blau)1531688259.0

Libby says tysm for your lovely words of support. ‘Perfectionism’ was fictional, based on her obsessive behaviour.… https://t.co/FFFrUpfEP3
— Kym Scott (@Kym Scott)1531732168.0

Storytelling is one of our most powerful tools for better understanding one another.

By sharing her writing, Libby is building bridges of understanding and empathy with others.

"For too long autism has been misunderstood and autistic people made to try to fit in, which adds hugely to their anxiety," Kym says. "The most important thing we can do for autistic people in my opinion is stop trying to make them fit into a neurotypical world and to allow and encourage them to be their very best autistic selves."

Libby on the right. Photo courtesy of Kym Scott.

Wear your values with products from PSA Supply Co., an independent site owned by our parent company, GOOD Worldwide Inc. GOOD makes money when you buy these products, and 10% of profits go to The Center for Community Change Action. Use discount code UPWORTHY to get 15% off your first order!
Culture