French woman reunites with the American boyfriend she hasn't seen in the 75 years since they fell in love during WWII.

Truly beautiful. If only we could all be so loved. 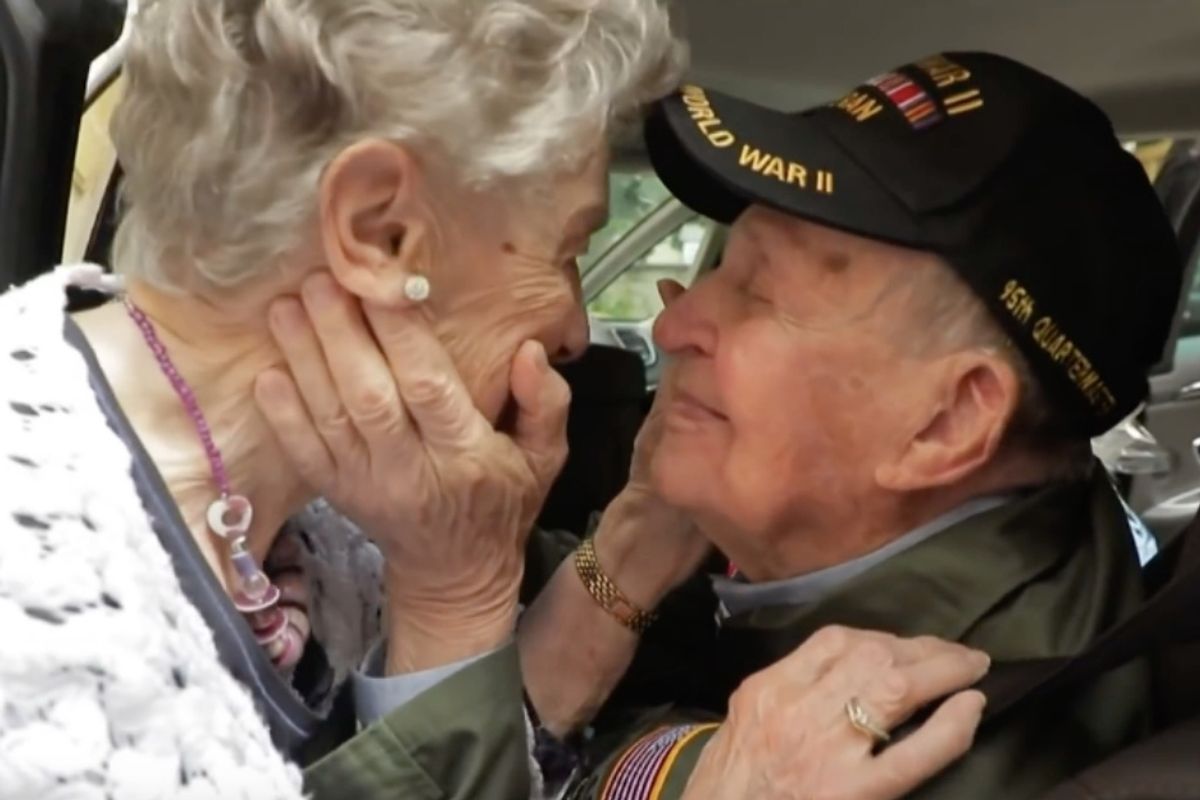 There are millions of love stories in the world, but occasionally one stands out—like this one.

Falling in love is a universal human phenomenon without a universal definition. It can be a slow-building fire or a flash in the pan. It can happen over years, or over a single cup of coffee. Sometimes it fizzles and fades, and sometimes it lingers for a lifetime.

We all love a good love story. With so much pain and sadness in the world, stories of the enduring power of love lift us up and remind us of the beauty of real human connection.

We also love stories of people living well into old age and having significant experiences in their later years. Such stories give us hope and remind us that anything is possible.

This story of an American man and a French woman who met during the WWII is both, and it will make you believe in the mystery of love and the enduring power it can have.

K.T. Robbins and Jeannine Ganaye fell in love when Robbins was stationed in France 75 years ago, but their relationship would be short-lived.

He was 24. She was 18. He was serving in the U.S. army, stationed in her village in northeastern France. They were both caught up in the trials of war and the triumphs of new-found love.

According to TODAY, when Robbins was transferred to the Eastern Front, he had to say a quick goodbye to Ganaye. They talked of the possibility of him coming back for her. He took a photograph of her with him.

They wouldn't see one another again after that.

Robbins was sent back to America after the war, where he eventually got married and started a hardware store. Ganaye moved on, too, marrying and having five kids of her own in France.

They'd both left WWII with thoughts of reunion. Ganaye had even started to learn English in the hopes that Robbins would return. But life happened, and those hopes had to be abandoned. "You know, when you get married, after that you can't do it anymore,'' Robbins said.

Neither forgot about the other, however. And neither could have predicted that they'd get another chance 75 years later.

Robbins and Ganeye—now Pierson—recently reunited for the first time since the war, and it's seriously the sweetest thing.

Robbins was interviewed by French a television station for a D-Day anniversary segment, and he shared the photo he still had of Pierson.

He thought maybe they could track down his former sweetheart's family, never imagining that she would still be alive herself—or that she would live within 40 miles of the village of Briey, where they had met more than seven decades before.

In a video shared by France 24, a reporter informs Robbins that Pierson is alive and well, and that she is waiting for him to meet with her. His surprise and joy is palpable as he laughs and kisses the reporter on the forehead.

The video then cuts to the former couple's reunion, and their chemistry is instantaneous. "Jeanine Ganaye," Robbins says, as he walks up to her. The two embrace, and she kisses his face over and over. There are smiles and tears as they sit side by side, holding onto one another's hands.

"I always loved you," Robbins tells her. "You never got out of my heart."

Pierson told the television station, "I always thought about him, thinking maybe he was out there, that maybe he'd come." The two spent several hours together before they had to part once again—but this time with plans for another meeting.