These staggering graphics put the WWII death toll in perspective. 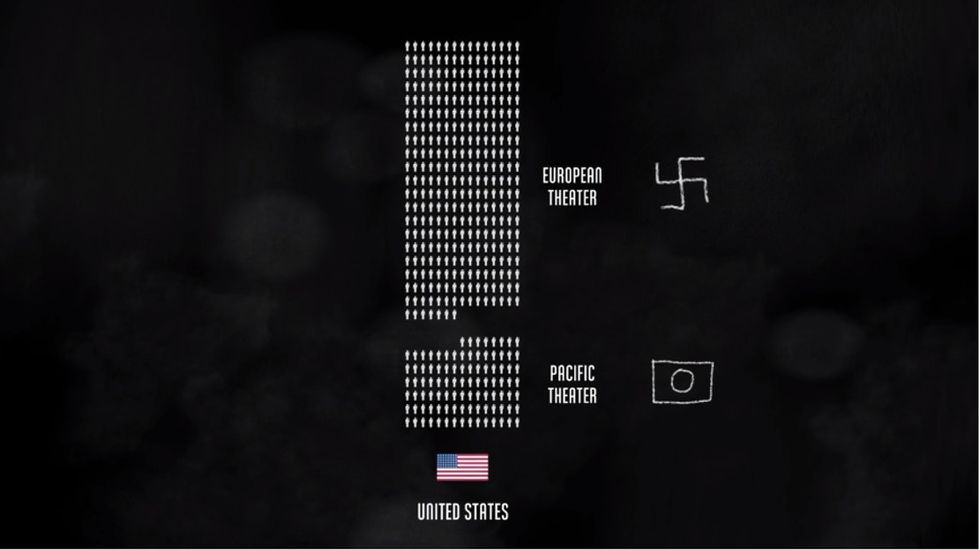 The civilian and military deaths of World War II make it, to this day, the most deadly in the history of our world.

But I had no idea of the full scope of this until I watched the video below. But first, a tiny little personal story.

How many places in the United States have trenches left over from a war with the rest of the world?

I have a friend in Germany who showed me some of the World War II trenches in the woods by his house near Aachen just about 10 years ago. I was blown away by that. We have some things like that left over from the Civil War, but nothing related to a world war. In fact, in some of those trenches and former battlefields, there are still unexploded weapons found even now. What it really means is: World War II is still not finished killing people.

When people think of war, they often think of soldiers and those who actively seek to do battle.

Overall, of the people killed in World War II, one-third of them were military and the rest civilians.

The Soviet Union (Russia) had by far the most casualties, both civilian and military. This was largely due to things like the Siege of Stalingrad — entire cities were cut off from food, water, and supplies for years, and starvation was all around. (It was also because Russia was headed by a ruthless dictator at the time, Joseph Stalin.)

Then there was the Holocaust, which claimed 6 million Jewish civilians and some others as well, such as Roma ("gypsies"), people with disabilities, gays, etc.

When you see the scale of this and consider the total number of lives, both civilian and military, from all countries who had casualties in World War II, the figures are simply astounding.

More people died in World War II than in any other war in history. Between the civilian and military casualties, it adds up to roughly the entire 2013 population of the states of New York, New Jersey, and California ... combined.

I work on and write about things from all over the Internet, so I've seen pretty much everything “shocking," “terrifying," and all kinds of things “you won't believe."

But this? I've watched the clip at least 10 times, and I still can't get my mind around it.

The image above is just a taste from Neil Halloran's "The Fallen of World War II." You can see the whole video below; it's 18 minutes and chock full of data on how many lives — civilian and military — were lost.

These are some of the more fascinating parts:

At 07:20, you can pause the narration to interact with the charts. It will show you graphics like this via mouseover:

And then, it proceeds to get into the civilian deaths, including The Holocaust. It's fascinating, if pretty sobering.

But the good news is, we haven't had a conflict like it since. Let's do what we can to keep it that way, eh?

Because weapons have become so much more destructive than they were then, the idea of another world war is actually much more unthinkable than ever before.

So you may be thinking, "Hey, Upworthy ... this really isn't very UPworthy, if ya know what I mean?!"

When I first watched this, I was actually shocked at the total numbers of people who died in World War II — especially the totals for people in other countries, which we see less often than those for the U.S. only. When the body count hits 70 million, it's something I can't begin to fathom. The 1905 George Santayana axiom goes, "Those who cannot remember the past are destined to repeat it" ... well, that's what I take from this. Your mileage may vary.

Watch it all here: