During WWII, he helped free a French town. His reaction to seeing it today is beautiful. 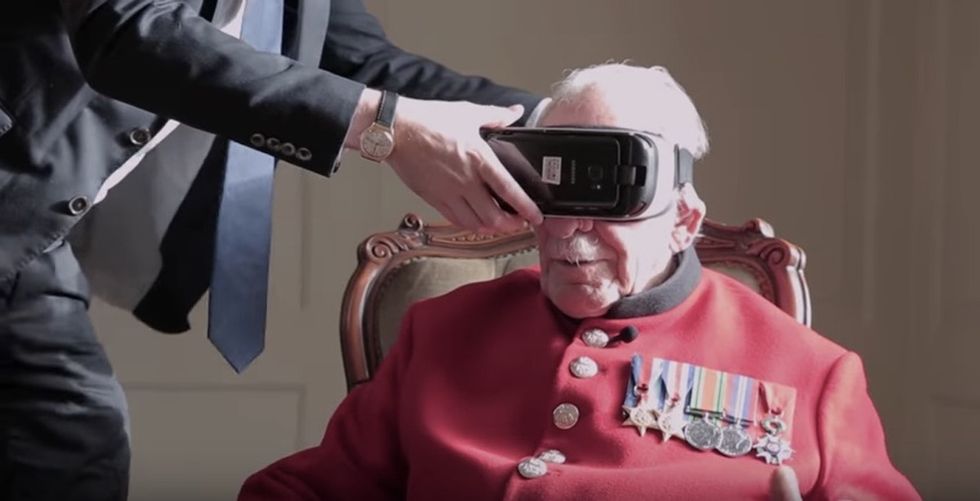 From a chair in his nursing home, 91-year-old veteran Frank Mouqué can virtually stand in the town square of Armentières, France — the town he helped liberate during WWII.

"We were bombed, shelled, sniped, fired at constantly," Mouque recalled of his time in the war. "There were quite a number of casualties. I lost a lot of my friends."

With a virtual reality headset strapped to his head, Mouqué was transported to the site of his most vivid memories: seeing in rich detail the town he first stepped foot in back in 1944 and hearing the voices of people who are free, in part, because of him.

It was weeks after D-Day and the allied troops were marching their way through France, Belgium, Holland, and Germany, freeing every city they could from Nazi occupation. One of those cities was Armentières, a tiny village in Northern France, just below the Belgian border.

After a hard fight, allied troops successfully liberated Armentières. What Mouqué remembers more than anything is the warm reception he and his company received from the people there. The families that took him in and the people who came out to thank him and his fellow soldiers are memories that have stayed with Mouqué for over 70 years.

In honor of Remembrance Day 2016, Twine, a U.K.-based network of innovators and creatives, decided to honor Mouqué with a one-of-a-kind virtual reality experience.

They, along with Mutiny Media travelled to modern day Armentières and made a video for Mouqué in which members of the town personally thanked him for his service.

The film was shot using 360-degree video technology, so when Mouqué viewed it through a virtual reality visor, it was like he was really there — walking through the streets, hearing a chorus of children sing to him, and even receiving a medal from the mayor. Mouqué was also given the medal in real life, which he said he was honored to receive on behalf of everyone who was there.

"We saw the potential of virtual reality, but had not yet come across anyone using it for the benefit of veterans," Stuart Logan, CEO and co-founder of Twine explained via email.

Virtual reality is brand new, meaning the boundaries of its ability to truly affect people are still being explored.

"I think this project shows just how powerful VR can be as a tool to transport people — physically and emotionally," Logan explained. "From the response of the people of Armentières when we first explained our idea — they immediately understood how poignant and important project this was going to be — all the way through to Frank’s incredible reaction to the experience, it’s been very moving."

"My grandfather fought in the war, so it’s personally a very significant project for me," Logan said. "It was incredibly important to recognize [veterans] and how their actions created the world we enjoy today," Logan said.

With a little creativity, ingenuity, and technology, he was not only able to see it, but feel like he was really there. That's a gift that is more than just a novelty. It's the heartwarming conclusion to a story that began decades ago and will echo through years to come.