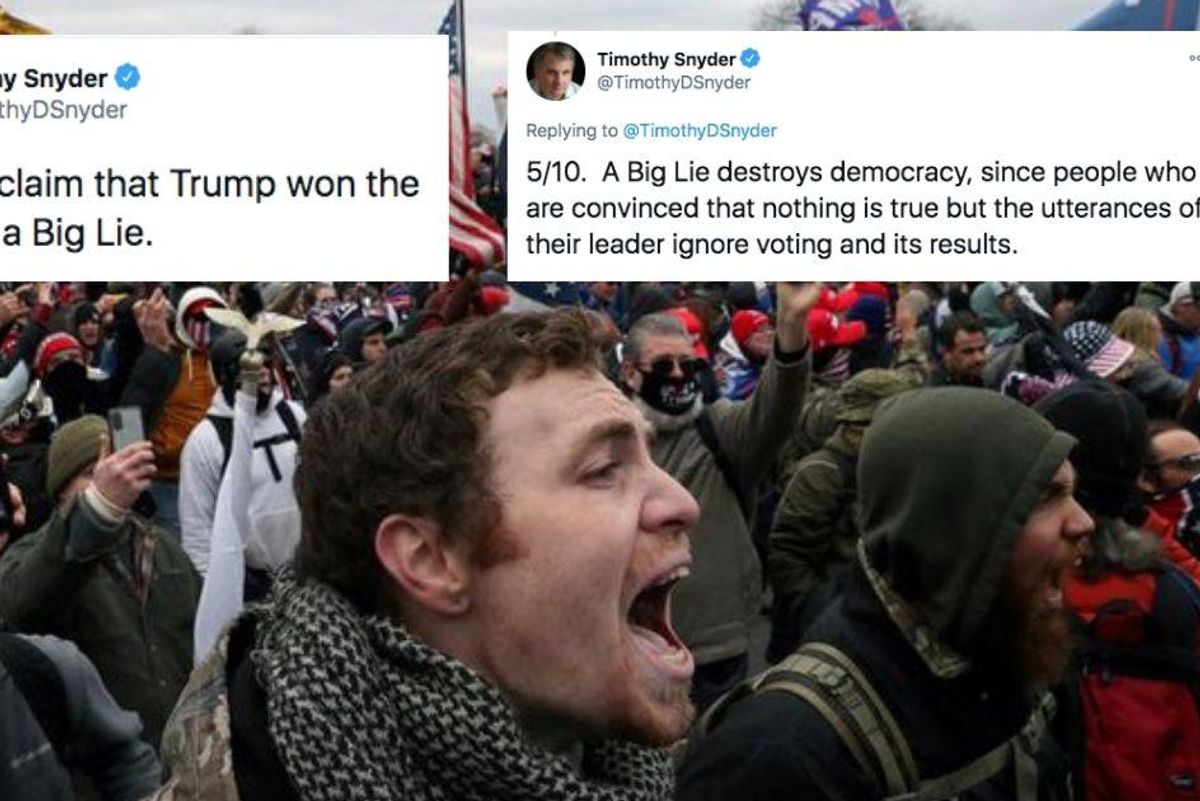 In October, the Washington Post shared an updated count of the lies or misleading claims President Trump has made since he was elected. The count, as of August 27, was 22,247 claims in 1,316 days. Why did the count only go through August? Because the president's pace had accelerated to more than 50 lies or misleading claims per day, and the fact-checking team couldn't keep up.

And it's not just the Washington Post. Fact checkers across the media landscape have repeatedly lamented that it's impossible to keep up.

All politicians stretch the truth sometimes, some more often or egregiously than others. But the frequency, nature, and shamelessness of President Trump's lying is in an entirely separate category than most politicians. This is not an opinion or even a judgment; it's an axiomatic fact.

The problem is, a shocking number of people overlook his lies, believe his lies, or in some cases, even love his lies. Opportunistic politicians and idealogues have seen him rise to power through lies, have seen the adulation he receives from his base for his lies, and have decided it's worth it to hitch their wagon to his lies. That's largely how we've ended up here, in a broken government and political culture where the president's supporters rally behind the lie that he won the election with a not-insignificant number of them willing to die or kill to defend that lie.

Yale historian Timothy Snyder calls the claim that Trump won the election a "Big Lie." Snyder, who specializes in the history of Central Europe and the Holocaust and has written books on tyranny, explained what that means in a Twitter thread.

"The claim that Trump won the election is a Big Lie.

A Big Lie changes reality. To believe it, people must disbelieve their senses, distrust their fellow citizens, and live in a world of faith.

A Big Lie demands conspiracy thinking, since all who doubt it are seen as traitors.

A Big Lie undoes a society, since it divides citizens into believers and unbelievers.

A Big Lie destroys democracy, since people who are convinced that nothing is true but the utterances of their leader ignore voting and its results.

A Big Lie must bring violence, as it has.

A Big Lie can never be told just by one person. Trump is the originator of this Big Lie, but it could never have flourished without his allies on Capitol Hill.

Political futures now depend on this Big Lie. Senators Hawley and Cruz are running for president on the basis of this Big Lie.

There is a cure for the Big Lie. Our elected representatives should tell the truth, without dissimulation, about the results of the 2020 election.

Politicians who do not tell the simple truth perpetuate the Big Lie, further an alternative reality, support conspiracy theories, weaken democracy, and foment violence far worse than that of January 6, 2021."

5/10. A Big Lie destroys democracy, since people who are convinced that nothing is true but the utterances of thei… https://t.co/KYpbSWXQv0
— Timothy Snyder (@Timothy Snyder)1610472687.0

Everyone who lives in objective reality understands that Trump did not win this election. There was no widespread fraud, and not enough small instances of fraud (which have occurred on both sides in every single election throughout history) to even come close to changing the outcome of the election. The election officials charged with carrying out the elections in every state, both Republican and Democrat, have said so. International election observers that Trump invited to witness our elections have said so. The federal agency charged with election security under Trump's own administration has said so.

Investigations into allegations have borne no fruit, and nearly all of the affidavits and "testimonies" (notably, not given under oath) we've seen have been from people describing normal voting and tallying processes that they don't fully understand. Voting machine companies have now launched billion-dollar defamation lawsuits against Trump allies who pushed conspiracy theory-laded lies about voting machines. The courts have been decisive in their rulings against the president and his allies, who are now 1 and 64 in lawsuits attempting to prove both fraud and unconstitutionality in some states' election processes.

The facts are not in question; it's only what people believe or want to believe that is in question.

Psychologists have explained that the president will never concede because his narcissistic nature and pathology will not allow it. He will double down on the Big Lie for the rest of his life. That's a problem—but it's not the only one.

A Big Lie can't succeed without support. Those in power who have gone along with this lie have breathed life into it, which also fuels the anger and resolve of those who believe the lie. Every person who has supported and disseminated this lie since election day bears responsibility for the attack on our U.S. Capitol and for how close we came to witnessing a massacre of our lawmakers last week. Every single one.

The bombardment of thousands of lies over the past four years have wounded and weakened our body politic. But the Big Lie slashed an artery and our democracy is bleeding out. Every single enabler of this lie needs to stand up and say "It wasn't true. We were wrong," as a tourniquet to stop the bleeding. Not just the politicians, but the media personalities who know the truth but supported the "Stop the Steal" message anyway. The only immediate remedy is to decisively end the lie, to clamp down on it hard and fast. Damage has been done and will need to be assessed, but right now the goal is survival.

That requires putting the truth and the country before any and all political or popular ambition, which some have proven time and again they will not do. But if there's ever been a time to swallow your pride and do the right thing, it's right now.