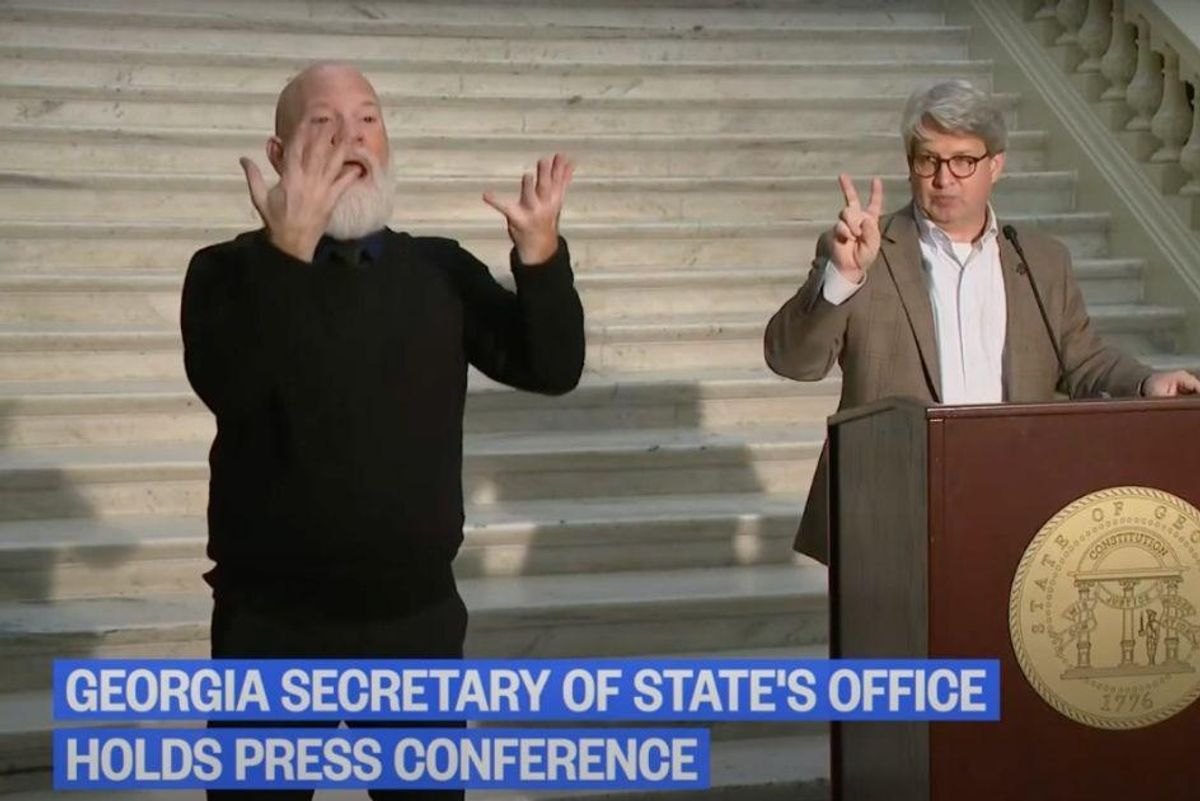 By now most Americans have heard, or at least heard about, President Trump's hour-long phone call with Georgia's Secretary of State, Brad Raffensperger, in which the sitting president attempted to convince the official in charge of Georgia's election to "recalculate" and "find" him enough votes to overturn the state's results in his favor.

The criminal implications inherent in the asking aside, the phone call was filled with baseless allegations that the president has "heard" and that "Trump media" has been sharing. It's the constant drumbeat of the past two months—the counts are wrong, the machines were rigged, the votes were flipped, the ballots were counted multiple times, fake ballots were brought in, signatures weren't checked, the recount was wrong, the audit was corrupt, and so on and so on and so on. The breadth and depth of fraud allegations is stunning, which is exactly the point. One or two allegations are easily checked and either verified or debunked. Flooding media with every allegation in the book makes it 1) impossible to debunk due to the sheer volume, and 2) more likely that some of the allegations will be believed, regardless of actual evidence.

It's Steve Bannon's "flood the zone with sh*t" approach to handling the media, and unfortunately, it works.

In the U.S., the people elected and appointed to serve as state election officials are the final authority on whether or not an election was run properly. (Unless a lawsuit leads to a court deciding that something went awry, of course. As of now, Trump's legal team and allies are 1 and 61 in court for election cases. The one case they won just allowed poll watchers to stand a few feet closer to the poll workers.)

One of those election officials, Republican Gabriel Sterling who serves as the Voting Systems Manager for the Secretary of State office in Georgia, spoke at a press conference today to set the record straight on the continued allegations.

"We've seen nothing in our investigations of any of these data claims that shows there are nearly enough ballots to change the outcome. And the secretary and I at this podium have said, since November 3rd, there is illegal voting in every single election in the history of mankind because there are human beings involved in the process. It's going to happen. So the question is limiting it and putting as many safeguards as you can in place to make sure that it doesn't happen."

Sterling mentioned the hand tally and the allegation that Dominion machines used "fractional voting" or flipped votes. "Again, by doing the hand tally, it shows none of that is true," he said. "Not a whit."

He also addressed the overall claims about the Dominion voting systems, pointing out that in the counties in Wisconsin and Pennsylvania that used Dominion voting machines, Trump actually won a majority of the vote. Then he debunked the idea that 900,000 votes had been deleted, as that would have meant a mathematically impossible turnout to begin with.

"Again, this is all easily, provably false," he said. "Yet the president persists."

Regarding Trump's allegation that some part of the Dominion machines were being switched out, Sterling said, "This one I don't fully understand. No one is changing parts or pieces out of Dominion voting machines. That's not -- I don't even know what that means. That's not a real thing. That's not happening. The president mentioned it on the call...from two days ago. That's, again, not real. I don't even know how exactly to explain that."

Visual aids are always helpful, so there was also a CLAIM vs. FACT poster displayed next to Sterling as he spoke that gave specific responses to specific numbers claims. Why people just believe numbers they see online instead of going to the source—again, the actual election officials—to see the actual, verified numbers is a bit baffling, yet here we are. Here's a close-up of the poster:

Again, Sterling is a Republican (as is Georgia Secretary of State Brad Raffensperger, as Georgia's governor Brian Kemp, all of whom stand by Georgia's election result). He wanted Trump to win. He mentioned that Trump's allegations might be discouraging people from turning out to vote—especially Republicans who might be convinced that the election system is so flawed that there's no point in participating in it.

Sterling referred to his press conference as yet another "Whack-a-mole" event, alluding to the fact that he has had to debunk these allegations over and over again, one at a time, for two months since the election. At one point he said he had screamed at his computer when he heard an allegation that's been debunked many, many times. So many of the "suspicious" allegations of fraud we've heard in testimonies and read in affidavits are just normal vote collecting and tallying processes that lay observers simply don't know are normal.

The poor guy sounded like an exasperated parent who's having to lecture their teenager about something they already should know for the hundredth time. Can't really blame him. It's exhausting to constantly battle a flood of misinformation and disinformation, especially when it's coming from the president himself.

You can watch the entire press conference here:

From Your Site Articles
Related Articles Around the Web
election