The effect different genres of music can have on your mind, body, and community. 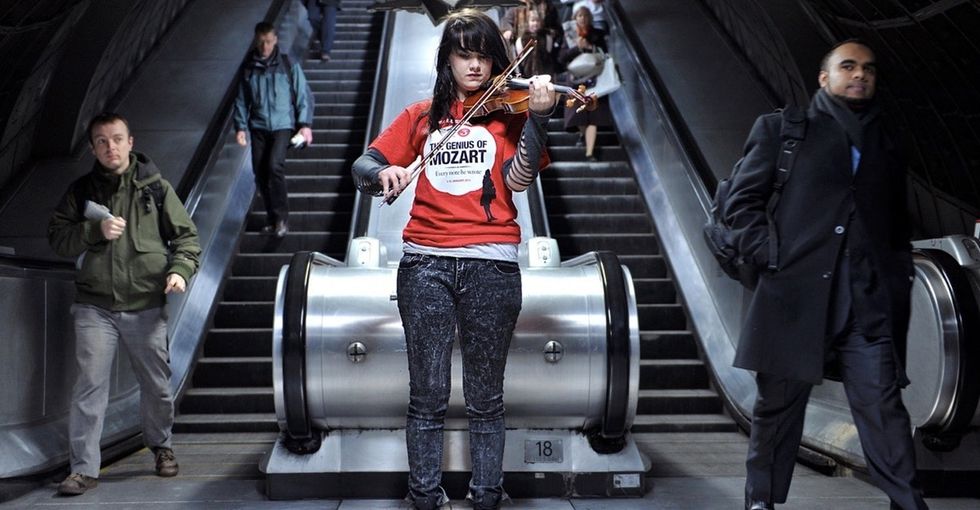 "On 9/11, I didn’t like how rock music responded," he said on "CBS This Morning." "And country music, collectively, the way they responded, it resonated with me."

Fair enough. The senator didn't elaborate on which country acts in particular resonated with him following the attack, but it doesn't matter. What matters is that for just about 15 years, he's sworn off rock music. And while it's not hurting the industry or the artists, it's not doing Sen. Cruz any favors either.

When we only listen to one type of music or swear off a genre entirely, we miss out.

Every genre has its benefits, and we can make the most of them by mixing up our playlists every once in awhile. Not only does it allow us to encounter new favorites, but our physical and psychological health and well-being may be positively affected too.

Let's break it down shall we?

The queen of breaking it down, Brittany Howard of Alabama Shakes. Photo by Kevork Djansezian/Getty Images.

A really good reason to listen to jazz: It may relax you from the brain down.

Downtempo music (around 60 beats per minute in this case) can cause the brain to synch up with the beat and create alpha brain waves. These waves are often present when we're awake, but relaxed. Listening to smooth jazz, especially combined with nature sounds like waterfalls or thunder, can be especially soothing.

Where to start: The very helpful website Jazz and Rain, which is exactly what it sounds like.

A really good reason to listen to metal: It may be good for your sense of self.

A study released last year determined people who identified as heavy metal fans in their youth grew up to have a strong sense of identity, a knack for community development, and were less likely to live with regrets. Rock on!

Where to start: System of a Down has an unconventional spin on traditional heavy metal, which is probably why their single, "Chop Suey," made a splash on mainstream radio in the early 2000s.

A really good reason to listen to classical music: It may deter or prevent crime.

In 2003, city staff in London began playing classical music recordings in few dozen train stations. 18 months later, vandalism was down 37%, robberies fell around 33%, and assaults on staff were down 25%. Stateside, Minneapolis and Portland have both tested the idea of playing classical music at light rail stations to deter crime.

The experts have a few theories as to why it works. The music may be so relaxing and calming, that criminals just say, "Pass." Or the correlation may have something to do with the fact that the stops seem to be cared for or looked after. There's more of a feeling of community, and you're less likely to do something when you think someone's watching. Even if that someone is a speaker blaring Vivaldi.

Where to start: New to classical music? Give Prokofiev's "Peter and the Wolf" a listen.

The train stations use speakers and recordings instead of live performances, but good music is good music. Photo by Ben Stansall/AFP/Getty Images.

A really good reason to listen to rap: It may help in the fight against depression.

Lots of rap and hip-hop songs tell the story of a person beating the odds or overcoming obstacles. According to researchers at Cambridge University, these upwardly mobile narratives may be a helpful tool for people experiencing depression or other mental health issues. These positive visual images can help people envision the mental place they'd like to be and allows them to facilitate progress toward that goal.

Where to start: The original "started from the bottom now we're here" is Notorious B.I.G.'s "Juicy." And, of course, the most recent iteration: Drake's "Started From the Bottom."

A really good reason to listen to pop music: It may give you an extra boost of endurance during your workout.

During a challenging or especially tiring aerobic effort (in this case, treadmill-walking), a 2009 study revealed that listening to rock or pop hits can improve endurance and possibly enhance physical performance. The hits may actually distract you while you're working, allowing you to go the extra mile ... literally.

Where to start: You can't spell pop without ABBA. Well, you can, but why on Earth would you want to?

ABBA killing the boot game while performing one of their many hits. Photo by Olle Lindeborg/AFP/Getty Images.

A really good reason to listen to country music: It might bring you joy.

Well, maybe not you specifically (yet, anyway), but it does for plenty of people. And while there doesn't seem to have been any specific studies on the health or wellness benefits of country music, there are two great reasons to give it a try: 1. Loretta Lynn and 2. Johnny Cash. They're all the reason you need.

So next time you turn on some music, don't be afraid to try something new.

Whether it's a genre you swore off years ago in the wake of a tragedy or just something you've never quite understood, it may be worth taking a second look. Your summer jams playlist (and maybe your mind, body, and community) will thank you.