Serena Williams came up with her own Sports Illustrated cover. And it shows. 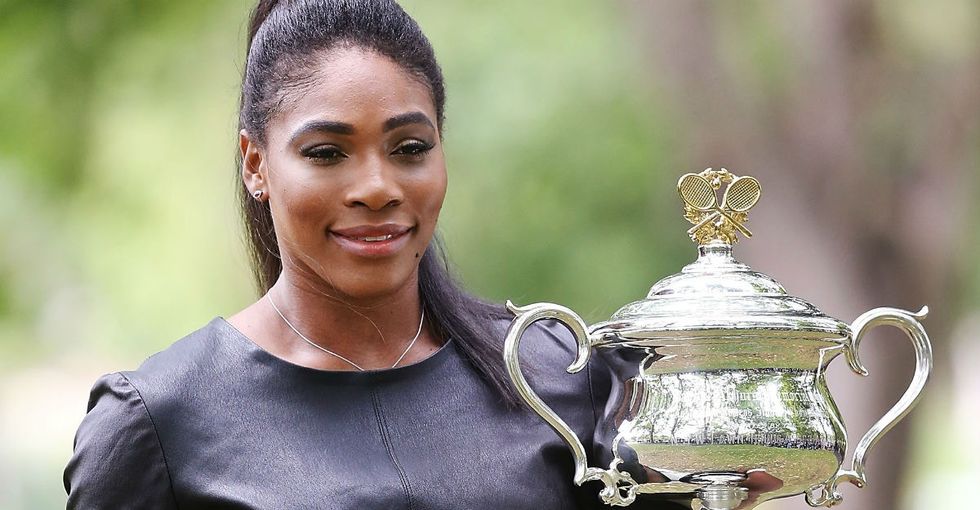 Serena Williams is Sports Illustrated's Sportsperson of the Year.

If you're wondering why, I'd guess you're just now crawling out from under your rock. (Just kidding ... sort of.)

Williams' Sports Illustrated cover is just what you'd expect: fine, fresh, fierce, and exactly what she had in mind.

The cover reflects her own expression of "femininity, strength & power," the outlet reported on Twitter. And it doesn't disappoint.

But the December issue isn't just fabulous — it's historic, too. The magazine's decision to honor her marked the first time an individual woman snagged the accolade since track star Mary Decker back in 1983.

It's about damn time.

On the tennis court, Williams has steamrolled the competition. Off of it, she demanded better of humanity.

As Sports Illustrated noted, Williams has (yet again) dominated women's tennis, winning 53 of 56 matches and maintaining a #1 ranking throughout the year, for the second year in a row.

Just as admirably, Williams lent her voice to several causes — from combating racial injustice to promoting women's equality and silencing body-shaming haters — and has made no apologies for her outspokenness along the way.

Williams has been an icon and a role model in her own right for years.

As a kid, when asked who she'd like to emulate if she were a famous tennis player, she had one helluva answer: "I'd like other people to be like me."

That confidence grew up along with her, too, and it shows — like when she's defending herself against ridiculous, sexist questions from reporters or brushing off body-shamers who try to bring her down.

"I embrace me," she told "Good Morning America" in response to her critics. "I love how I look. I love that I'm a full woman and I'm strong and I'm powerful and I'm beautiful at the same time. There's nothing wrong with that. "

Of course, as with all major awards and honors, there's been some controversy over Williams landing the coveted Sportsperson of the Year slot. Some readers are upset she was chosen for the award over racehorse American Pharoah (which is odd, because the award does go to a sportsperson).

There was also some chatter about her cover being sexualized. But, again, Williams was in control of how she was portrayed — and it's not like past Sportsperson of the Year covers haven't been a bit steamy anyway (yeah that's right, Michael Phelps, I'm talking to you).

No matter what people say, the fact is: Serena Williams is more than deserving of this honor.

The recognition she gets from it may mean the best for her has yet to come.

“This year was spectacular,” Williams said, according to Reuters. "For Sports Illustrated to recognize my hard work, dedication and sheer determination with this award gives me hope to continue on and do better."