Powerful images emerge as the world reacts to Brussels attacks.

A quote by Fred Rogers has become a go-to reaction to disaster. 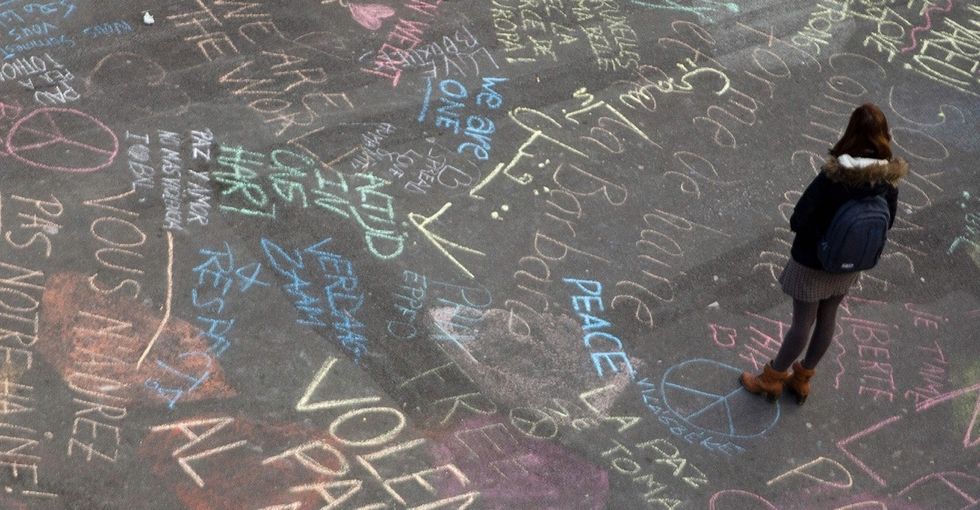 On March 22, 2016, more than 30 people were killed in terrorist attacks in Belgium's capital city, Brussels.

Airport staff hug as passengers are evacuated from Zaventem airport after the attack. Photo by Sylvain Lefevre/Getty Images.

There's a famous quote by Fred Rogers about looking for "helpers" amid disaster.

It can be applied to just about any devastating situation, but it always seems especially poignant after a terrorist attack:

"When I was a boy and I would see scary things in the news, my mother would say to me, 'Look for the helpers. You will always find people who are helping.' To this day, especially in times of 'disaster,' I remember my mother's words and I am always comforted by realizing that there are still so many helpers – so many caring people in this world." — Fred Rogers

It's easy to look at disaster and see the worst in people. It's easy to question your faith in humanity after such an event. It's easy to become completely and totally apathetic, to let cynicism win. But if you look closely, you can see the helpers Mister Rogers spoke of.

The response to this morning's terrorist attack in Belgium is no different: Helpers are out there.

A message written on the ground near the city's center reads "Brussels is beautiful." Photo by Kenzo Tribouillard/AFP/Getty Images.

Using hashtags like #IkWillHelpen ("I want to help") and #PorteOuverte ("open house"), the people of Brussels offered shelter to those with nowhere to stay.

After the attacks, people were left without housing and without a means to travel elsewhere. This is what makes the #IkWillHelpen and #OpenHouse hashtags such a necessary, loving response in the face of terror. Embracing strangers instead of shunning them will always be the most human response to tragedy.

Public transportation quickly became overwhelmed, so the helpers of the world did what they could to ensure safe passage.

A hashtag popped up for people willing to help organize a carpool.

People leave messages and flowers outside the stock exchange building in the city center of Brussels. Photo by Nicolas Maeterlinck/AFP/Getty Images.

Others created tributes to the victims in solidarity with neighboring France, which was struck by an attack last November.

Two images picturing the color of the Belgian flag — a drawing by French cartoonist Plantu and the famous Belgian comic character Tintin — in tribute to victims of triple bomb attacks in the Belgian capital. Photo by Joel Saget/AFP/Getty Images.

A woman leaves a bouquet of flowers next to a French national flag with the words "Paris Brussels Solidarity" at the fence of the Belgian embassy in Paris. Photo by Thomas Samson/AFP/Getty Images.

Politicians around the world weighed in, but two statements stand out in highlighting the importance of compassion, understanding, and, yes, helpers.

The first comes from U.S. Rep. Keith Ellison, praising the helpers of Belgium:

"One of the goals of these terrorists is to drive us apart through fear and hatred. The people of Belgium are reminding us why terror will never succeed. They are providing shelter to tourists and strangers throughout the country, and the hashtag '#ikwillhelpen,' which means 'I want to help' in Flemish, is trending throughout Europe."

A sign reading "Share your love" stands at a memorial at Place de la Bourse in Bordeaux, France. Photo by Kenzo Tribouillard/AFP/Getty Images.

The other is from President Obama, speaking from Cuba:

"We stand in solidarity with them in condemning these outrageous attacks against innocent people. We will do whatever is necessary to support our ally Belgium in bringing to justice those who are responsible. We must be together regardless of nationality or race or faith in fighting against the scourge of terrorism. We can and we will defeat those who threaten the safety and security of people all around the world.”

A Belgian flag reads "We are all Brussels" at the Place de la Bourse memorial. Photo by Kenzo Tribouillard/AFP/Getty Images.

Sometimes the world can be a dark place. What's important is that we don't forget about the light that follows it.

We can't fight hate with more hate. We must look to those who refuse to respond out of hatred or vengeance, but instead with a message of love and peace. That's how humanity wins.