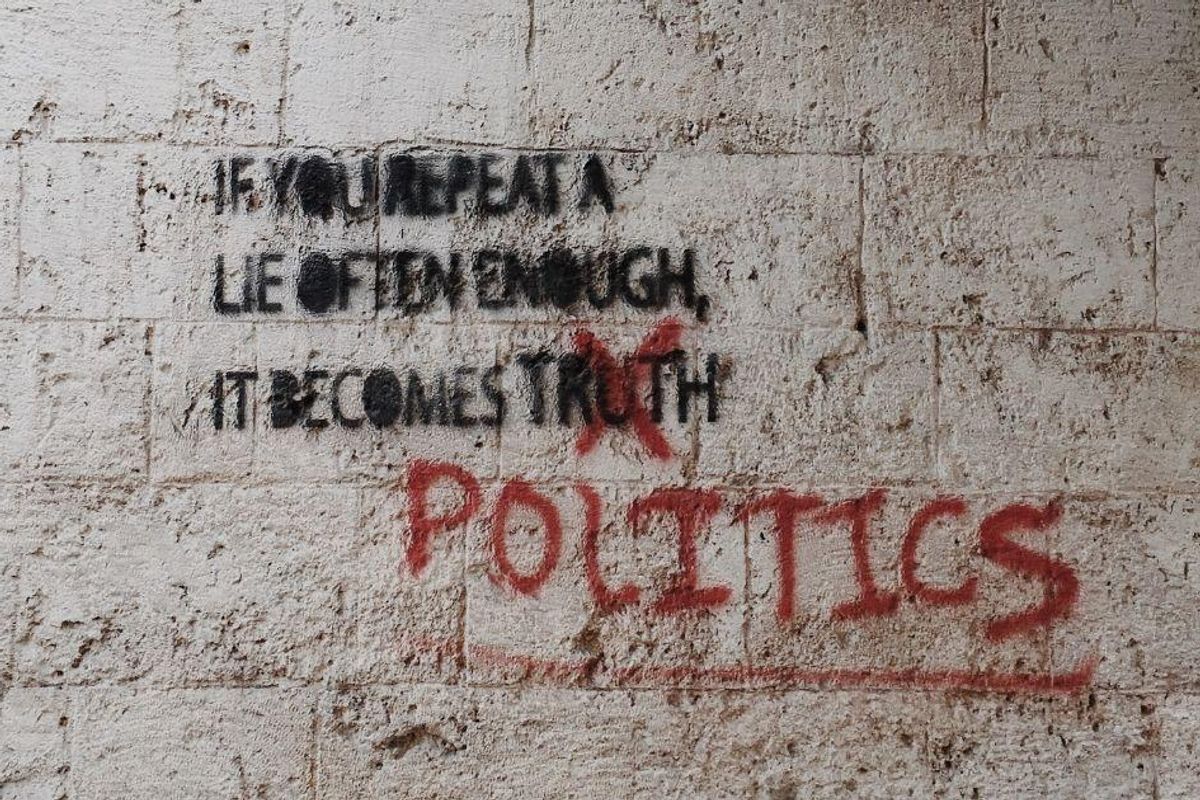 Photo by Brian Wertheim on Unsplash

Politics has always been a mixed bag of genuine discussions about governance, inane partisan bickering, and ongoing struggles for power. As much as I wish we could engage in the first more often, it feels like politics in America has become far more of the latter.

Within those partisan power struggles, the language of politics gets skewed and molded to fit specific purposes. Sometimes, phrases are used as dog whistles calling on people's prejudices. Far too often, the manipulation of words and their meanings—political rhetoric—renders certain terms meaningless as they get tossed around without nuance or context. Ultimately, the repeated use of certain terminology ends up destroying discourse instead of adding to it.

This is by no means an exhaustive list, but here are 10 terms I'd love to see us flush from American political discussions:

There's no excuse for anyone ever using this term. To call certain people "real Americans" implies some kind of defining characteristic that some Americans have and some don't, which is the complete opposite of the country's diverse reality. And who would get to determine that definition, anyway? Do we go by majority? A full 82% of Americans live in urban areas. Does that mean city people are "real Americans" and the rural minority are not? Obviously, that's ludicrous—just as ludicrous as the idea that Americans in diners talking about the Bible are "real Americans." There's simply no such thing.

It's not that politics based on identity doesn't exist—it's that it has always existed. The entirety of American history is filled with white, land-owning men creating politics around their own identity and excluding people of different identities from the political process in both overt and covert ways. We are where we are because inequality and injustice necessitate pushing for policies based on identity, but let's not pretend that the concept is new. It's just that the identities that are finally getting a voice are those that were kept out by the white, male identity politics that dominated the nation for centuries.

This word may have had some meaning at some point, but now it gets tossed around to mean anyone who lives in a city, lives on a coast, has above a certain amount of money, or has a college education. I've also seen it used as a pejorative to describe experts in a field, which is just silly. While yes, there are uber-wealthy people with undue power in politics who can be rightfully scorned as "elites" for snubbing their noses at the concerns of the rest of us, that's a very small group of people. Dismissing the entirety of academia or the entirety of the American coasts or the entirety of people with post-secondary educations as "elitist" is a misuse of the word and needs to stop.

On the flip side, the term "working-class Americans" has far too narrow a meaning the way it's usually used. When someone says "working-class Americans" it's usually meant to conjure up images of generally white farm, factory, or mining workers toiling away somewhere in Middle America. Rarely is the term "working class" used to refer to Black or Latino or immigrant workers in big cities, even though they make up a huge percentage of what's technically considered working-class labor. Rarely is the economic anxieties of those urban workers utilized in the same way politically. (The term also makes it sound like only certain kinds of jobs count as "work," which is just weird.)

The way our electoral system is set up makes the illusion of blue and red states a thing, but it's really not a thing. All states are mish-mosh of people, and all states are closer to 50/50 than 100/0 when it comes to red/blue, Democrat/Republican, liberal/conservative votes. I wish we could do away with those binary political labels altogether, but at the very least we need to stop assigning them to entire states. (And let's ditch the Electoral College that perpetuates the illusion altogether.)

I don't know who needs to hear it, but states are arbitrary lines drawn across a map by warring colonial nations. P… https://t.co/ZccXiEZ2Ma
— Kazumi Chin (@Kazumi Chin)1604545132.0

There are lots of different versions of maps that more accurately portray the way the U.S. votes, but the truth is that every place is some shade of purple. And our differences are based much more along an urban/rural divide than a state line one.

Yes, some people make a career out of being in government. Yes, there are some people who stay in politics for the wrong reasons or who have been in their positions for longer than they should. But let's stop saying "career politician" like it's automatically bad. Experience and expertise in any field is generally a good thing, and that's as true for public service as it is for anything else. Newcomers add fresh perspectives and voices to government, but there is also value in putting people who know what they're doing in powerful positions of leadership. We could address the negatives of long-term service by introducing term limits where there aren't any, but let's stop demonizing people who dedicate their lives and careers to public service.

This word has a meaning, and it's not what the vast majority of Americans mean when they use it these days, on either side of the aisle. Socialism is a "social and economic doctrine that calls for public rather than private ownership or control of property and natural resources." Practically no one is advocating for actual socialism in the U.S. Some people think anything having to do with equality or equity is synonymous with socialism, but that's not anywhere close to true. Some people think universal healthcare is a slippery slope to a socialist state, even though they'd never think of public education in the same way. Some people just hear "radical socialist agenda" and start foaming at the mouth, even if what's being described as radical socialism would be considered center-right ideology in most democratic nations we consider our peers. And on the same note...

What is often called "radical" isn't really radical these days. The only reason that some things seem radical—as defined by advocating a sweeping change—is because of how long certain things have been allowed to remain status quo. The idea that anyone who works a full-time job should be able to afford to live is not a radical idea. It's just common sense. The idea that no one should go bankrupt or die because they have a medical issue isn't radical—it's the way people in almost every other country live. The idea that people should be able to live free from discrimination for being who they are is not a radical idea—it's simply freedom. The word "radical" is used to make any idea sound out-there, no matter how reasonable it might be in reality.

Not everyone who enacts legislation we don't like is a fascist. Not everyone who pushes nationalism is a fascist. Not even everyone who uses prejudice and fear to drum up populist support is a fascist. Like socialism, this word has been thrown around so often as to have virtually no real meaning anymore. Fascism was a specific form of rule during a specific time and place in history, and though we can point to some similarities of thought or action between politicians now and then, they're not the same. It's not likely that an autocrat dictator would find success with actual fascist practices here, and labeling everything that smacks of authoritarianism or demagoguery as fascism muddies the waters. Authoritarianism and demagoguery are problematic enough on their own, and jumping straight to "Fascism!" enables people to dismiss legitimate concerns over them.

A patriot is someone who loves their country and is willing to defend it. A patriot is not someone who terrorizes their own seat of government because they reject reality and don't like the way the voting went. A patriot doesn't defend an attack on our Capitol or the attempted overturning of an election. A patriot doesn't fly the flag of a defeated country that fought with the United States over the right to enslave Black people and nearly split the nation in two. A patriot doesn't try to keep Americans they disagree with or don't like from voting. A patriot doesn't accuse half of their fellow Americans of being demonic pedophiles. If the people who do any or all of those things are the ones calling themselves patriots, then the word is useless.

Words and their actual meanings matter. Let's discuss ideas. Let's debate policy. But let's do so without slinging around buzz words and phrases that oversimplify positions, play on people's prejudices, and remove the nuance necessary for reasonable discourse.

From Your Site Articles
Related Articles Around the Web
politics
popular