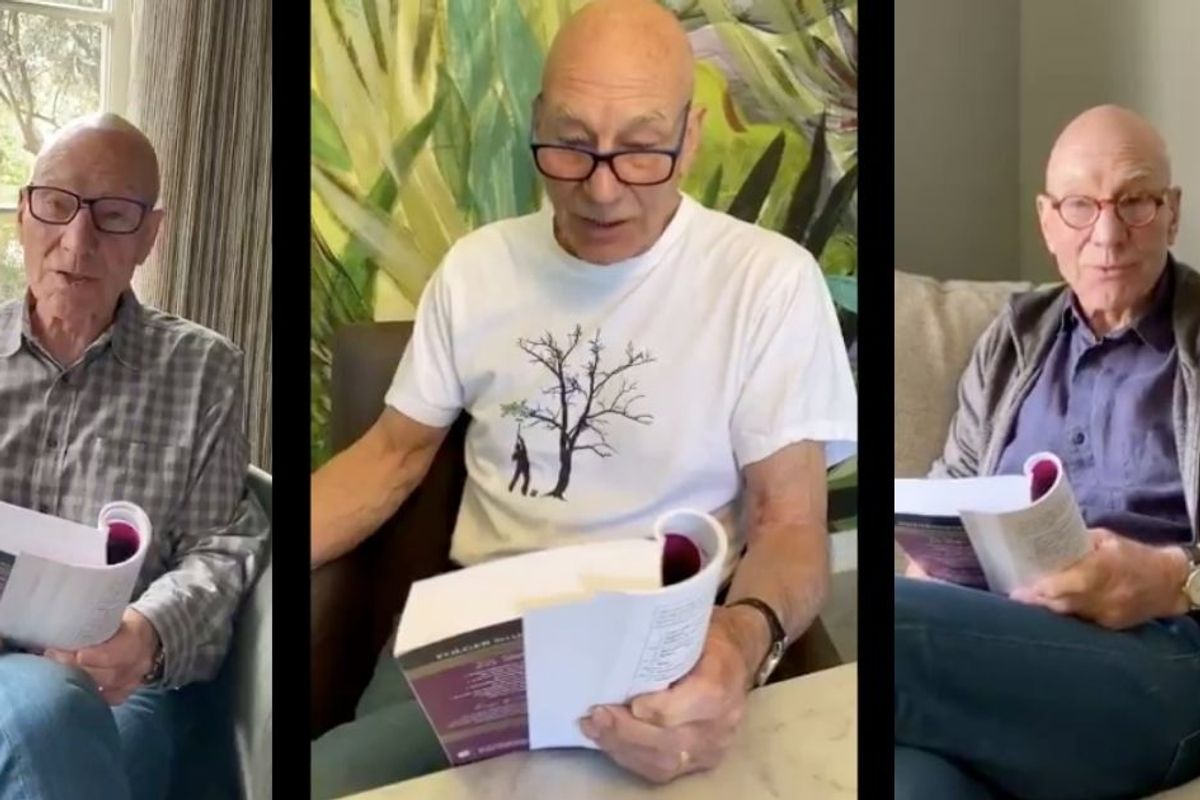 Patrick Stewart could read the phone book and people would listen, so it's not entirely surprising that folks are going gaga over him reading Shakespeare's sonnets. Stewart has been reciting #ASonnetADay from his home, much to fans' delight.

There's something particularly soothing about the Star Trek and X-men actor reciting poetry to us during a pandemic quarantine. Perhaps it hearkens to a quainter time, when people would sit and read to one another by firelight instead of arguing over Twitter about who's the worst human being in Tiger King. Stewart's attempt to elevate our entertainment to something beyond the banal and the sensational is admirable.

If reading Shakespeare during a global crisis seems out of touch somehow—perhaps too uppity or elitist—remember that Shakespeare lived during the plague era. A quarter of the population of his hometown was wiped out from bubonic plague during his childhood, and several more outbreaks wreaked havoc on the society in which he lived as he grew older.

As an article in The Conversation points out, "Epidemic disease was a feature of Shakespeare's life. The plays he created often grew from an awareness about how precarious life can be in the face of contagion and social breakdown." He was also a provincial commoner—just a normal guy, who also happened to have extraordinary writing capabilities. So Shakespeare's writing really isn't so far removed from our current reality—in fact, he probably had a better handle on what we're experiencing than most modern day artists.

So enjoy Sir Patrick Stewart sharing Shakespeare's love poems in his beautiful baritone voice, and follow him on Twitter to get a your daily dose of #ASonnetADay.

He occasionally skips a sonnet because it's too difficult to read or because he simply doesn't like it. You do you, Sir Patrick.

And he frequently gives an intro about the specific sonnet or about Shakespeare's poetry in general. Sir Patrick bringing the learnin'.

So far, he's brought us to Sonnet 18, the famous "Shall I compare thee to a summer's day..." poem. Just beautiful. Thank you, Sir Patrick, for using your voice to soothe us through this pandemic with one of humanity's greatest works.

Sonnet 18. Perhaps the most well-known sonnet in the book. Speaking of the book, a little backstory on that too.… https://t.co/DtcAph1CoR
— Patrick Stewart (@Patrick Stewart)1586217530.0