Parkland kids are changing America. Here are the black teens who helped pave their way. 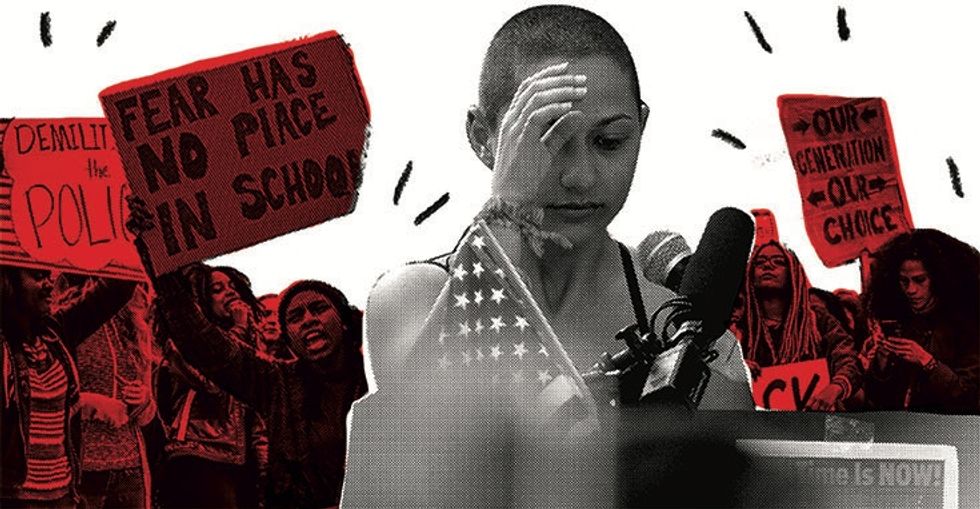 As thousands across the nation prepare to take to the streets on March 24, 2018, for The March for Our Lives, we're taking a look at some of the root causes, long-lasting effects, and approaches to solving the gun violence epidemic in America. We'll have a new installment every day this week.

That's when a 19-year-old man shot and killed 17 students at Marjory Stoneman Douglas High School, and citizens around the country became rightfully outraged. 70% of Americans are fed up with excuses from the government and the National Rifle Association for not taking action about the circumstances that led to one of the deadliest high school shootings in modern American history.

Emma Gonzalez, David Hogg, and Cameron Kasky have been just a few of the numerous Parkland students leading what's been called the #Enough or #NeverAgain movement for gun reform.

In the midst of unimaginable tragedy, these teens have been unapologetically outspoken about the collective American failure to implement safe, commonsense gun laws that a majority of Americans now believe in.

Many have garnered a huge social media following, several have been interviewed by media such as "60 Minutes" and The New Yorker, and the young activists have made it clear they aren't backing down until things change.

They're already making a substantial impact on policy changes and the national conversation and understanding of gun violence. But it's time to take a step back and remember they weren't alone in bringing this issue to the forefront.

Some other really amazing teen activists have been fighting for gun reform for years.

Rather than getting handclap and raised fist emojis from thousands of Americans, black youth activists have often been demonized, labeled as "thugs," and deemed trivial in the systematic gun reform conversation.

There are the friends of Hadiya Pendleton, a high school honor student who was killed at a park. In January 2013, they started a national Wear Orange movement to campaign against gun violence.

In September 2013, the Dream Defenders worked with NAACP leaders in an attempt to repeal the notorious Stand Your Ground law in Florida.

Black youth organized a massive march in New York City to protest gun violence and police brutality in December 2014. Tens of thousands of people attended the protest and marched for safety for all people.

And in July 2016, four teenage black girls organized a march and silent sit-in at Millennium Park to protest gun violence in Chicago communities.

These are just a few examples of thousands of active black teens working on gun reform over the years. Though many of these protests have been successful and meaningful, many have criticized the youth for their protest strategy.

It's imperative that we not just recognize young black activists, but that we also appreciate their efforts being equally as important and invaluable as those of non-black kids.

The Parkland kids should be supported. They've done remarkable work that warrants the celebrity outreach they've received. And they've certainly gotten their share of criticism from the NRA and the internet.

But there are unequivocal double standards in the response to activism from young, non-black students compared with the activism of young black kids that are fighting for similar changes. In comparison, Parkland activists were quickly taken seriously and supported financially.

Historically, America has failed to side with black activists on a number of issues — including gun control — and continues to do so. This inability to recognize black activism is a detriment to real change that could affect a number of different communities, including those most at risk.

After all, the impact of gun violence on black communities is staggering. Black Americans are disproportionately affected by gun violence compared with white Americans. According to the Centers for Disease Control and Prevention, black Americans are, on average, eight times more likely to be killed by firearms than those who are white.

As innumerable white men continue to barrel the black-on-black crime narrative on social media and Reddit threads as an excuse to not listen to black protesters, black kids have been in the streets, on the internet, and in government buildings advocating for change in their schools and communities.

Critics often have even conflated the Black Lives Matter movement with violence when, in fact, most Black Lives Matter organizations center their missions around reducing violence. Black teens have organized rallies, spoken with politicians, and confronted the NRA in an effort to get guns out of dangerous hands and particularly out of communities where they've been especially destructive.

Instead of praise, many of the teens and young black people active in protesting injustice were shut down, ignored, or, worse, persecuted.

We can do better than that.

When we financially support organizations that mobilize to decrease violence in communities, call out racist statements on social media made in response to black kids calling out injustice, and praise black kids just as much as other youth when they protest, strategize, and organize, we can create a system that supports the values of all people.

The road to justice and commonsense gun reform is long and complex, but young people of all demographics have shown this world that change is possible when we listen.

Let's ensure our society is listening to all voices — not just those who fit a certain narrative.

For more of our look at America's gun violence epidemic, check out other stories in this series:

And see our coverage of to-the-heart speeches and outstanding protest signs from the March for Our Lives on March 24, 2018.

Acts of kindness and compassion are always inspiring. A veterinarian gave a different spin on the phrase "if you can't beat 'em, join 'em".

The poor little pup in this video walked into this shelter with a history of being abused. He was so traumatized that he wasn't eating. The vet treating him wasn't sure what to do, so he decided to book a table for two: a the dog's place. It is not clear whether he got an official invite from the canine in question, but he felt pretty safe about showing up unannounced. He walked into the cage and sat down next to the dog. With his back up against the corner of his new (and hopefully temporary) domain, the rescue stared apprehensively at his human guest. The vet presented a dog dish with food and put it in front of the dog. The frightened pup just looked at the dish and made no attempt to eat. Then he broke out another dog dish identical to the one he just gave to his four-legged patient and started eating out of that bowl. And then came the turning point.