A 'Simpsons' animator's real-life struggle inspired a cartoon for kids with disabilities. 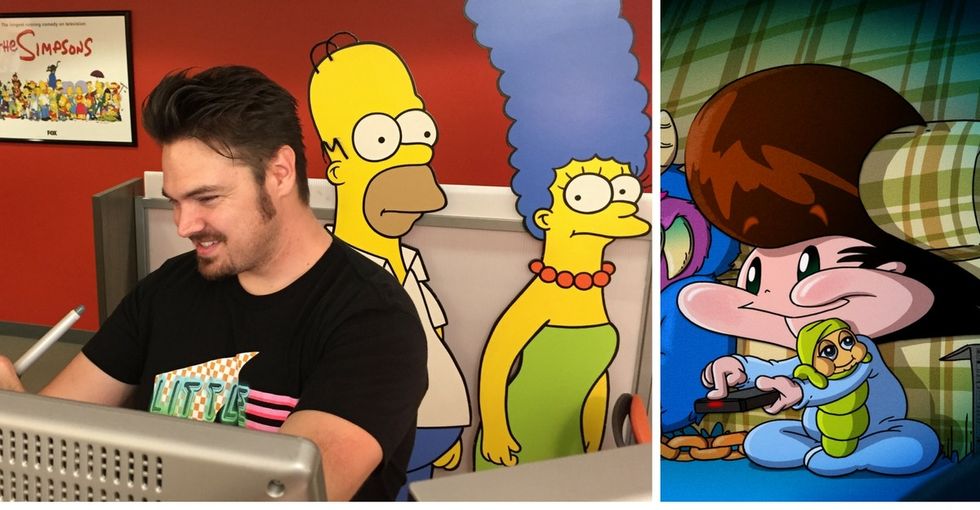 As long as animator Chance Raspberry can remember, he's held a pencil in his hand.

When he was 11, Raspberry broke the family VCR by skipping it backward and forward, pausing it to copy the images from Disney's "Sleepy Hollow" into an old notebook. Other days, he sat hunched over the desk in his room, mimicking the jet-black pen strokes that made Spiderman come to life.

For Raspberry, drawing pictures was a window to the rest of the world.

It was the '80s, and at the time, he was coping with Tourette's syndrome, a disorder health professionals and people close to Raspberry knew little about. It meant he often engaged in behaviors that no one could predict or control.

The tics, which started as unusual bouts of excess energy, often caused Raspberry to do dangerous things — like venture into the street in the middle of a preschool class.

Once, Raspberry alarmed his preschool staff by perching on top of a jungle gym, pretending to shoot classmates with an imaginary bow and arrow. When they told him to stop, he literally couldn't.

As a result, Raspberry was often sent home, his parents pleading with school administrators who didn't understand him and his behavior. When he was 8, the tics started to manifest in sudden, violent outbursts.

"The worst tics were when I would repeatedly slap myself across the face. I would have to hit myself in alternating patterns of five and 10. On top of that, I had this tic where I needed to rub my right cheek against my right shoulder, and eventually I got a rash," Raspberry explains.

When he felt alone, Raspberry found solace in the zany world of cartoons, where high energy was normal.

He began to draw. But being an artist — and one with a disability — didn't make everything easier for Raspberry. Classmates would often try to startle him just to see what he would do. Sometimes, they would even ruin his drawings.

"I remember I used to make this sound, like ‘weeee,’ obsessively. One time I left my desk to find that this drawing I was working on for hours was gone. I came back, and the drawing had this ‘weee’ written all across the top. It was destroyed, and I was really mad, because it had taken me so long,” Raspberry recalls.

He channeled all of his energy into his drawings, even ignoring the occasional teacher who would rip the pencil sketches from his hands in class and crumple them into the trash. Despite it all, his drawings got better and better.

16 years, countless hours, and thousands of cartoon sketches later, Raspberry ended up with a career drawing the same unruly boy who inspired him as a kid: Bart Simpson.

Raspberry says he always loved Bart "because he's this outsider, rebel spirit — but he's never been ashamed. He doesn't regret being different."

"I think as a kid who had these feelings of being an outsider and being different, I loved watching Bart getting into trouble and seeing these stories told through the eyes of someone my age," he says.

After winning a group Emmy for his work on the Simpsons at 28, Raspberry decided he wanted to do more for other kids with neurological differences. He wanted to help those kids — and people around them — understand why thinking differently needs to be not only accepted, but celebrated.

Drawing from his own childhood experiences, Raspberry found the inspiration for the new animated show he's developing called "Little Billy."

Like Raspberry, Billy is a young boy with a neuro-cognitive disability — only Billy's is a fictional one called "ultra-hyper-sensitivity." People around Billy don't often understand him, and some people even find him dangerous.

“I am basing this on my actual life, and I had all of these issues with my teachers and not getting along or following the order of things," he says. The show is largely based on Raspberry's life around age 4, when his abundance of energy made him realize he was different from other kids.

In 2014, Raspberry raised $30,000 on Kickstarter to help bring "Little Billy" to life. He's currently finishing the pilot and continues to work full time as a character layout artist on "The Simpsons."

Raspberry channeled his abundance of energy into creating the completely hand-drawn series — the trailer alone required a whopping 1,372 drawings.

The goal of the series is to tap into the nostalgia of childhood in an entertaining, healing way while also creating visibility around what it's like to grow up with special needs.

"The show will explore in full in an honest way how a family that is dealing with this goes through it, how they’re affected," Raspberry says.

Watch the trailer for "Little Billy" below: