More than 44,000 people came together to set the Guinness World Record for reforestation.

More than 44,000 people came together to set the Guinness World Record for single-day reforestation efforts. 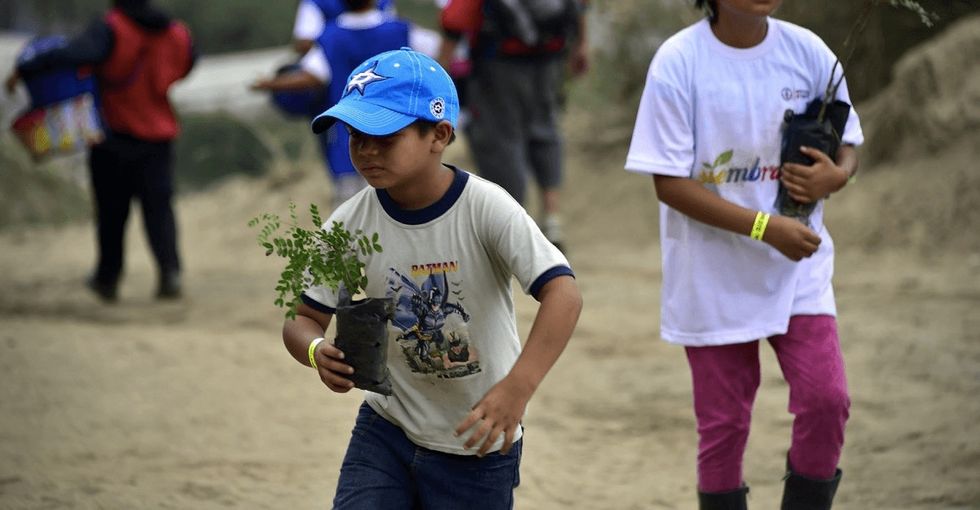 A group in Ecuador set a world record over the weekend by planting nearly 650,000 trees in a single day.

Agence France-Presse reports that on May 16, 2015, nearly 45,000 people took part in the largest single-day reforestation project ever. In total, 647,250 trees (and more than 220 species of plants) were planted on roughly 5,000 acres of land, marking a new Guinness World Record. Woo!

Better than just a world record, these reforestation efforts will help Ecuador reach its own national target to conserve and restore more land than is deforested between 2008 and 2017.

Since 2008, the country's environment department notes, deforestation has been reduced by more than 50% of the historical rate, protecting 4.3% of the total land area (which comes out to the equivalent of something like 840 million trees, but who's really counting, anyway?).

A child plants one of more than 200 species of plants during Saturday's record-setting day. Photo by Rodrigo Buendia/AFP/Getty Images.

Reforestation helps offset the amount of carbon dioxide in the atmosphere through "carbon sequestration."

Trees naturally absorb carbon dioxide, pulling it from the atmosphere and using it for — you guessed it — fuel. Trees have some other benefits, too, like improved air, water, and wildlife, and some protection against erosion.

Trees are absolutely crucial to the fight against climate change.

While this seems pretty obvious, it's easy to forget. A great many things can affect climate change, from the things we eat to the cars we drive to the energy we use to power our homes. But the number of trees out there absorbing carbon are important factors, as well. Deforestation intensifies climate change, and reforestation and conservation efforts help push back.

Imagine how good things could be if every country had a day like this.