Maybe Joy Behar should apologize for this joke — but not to Mike Pence. 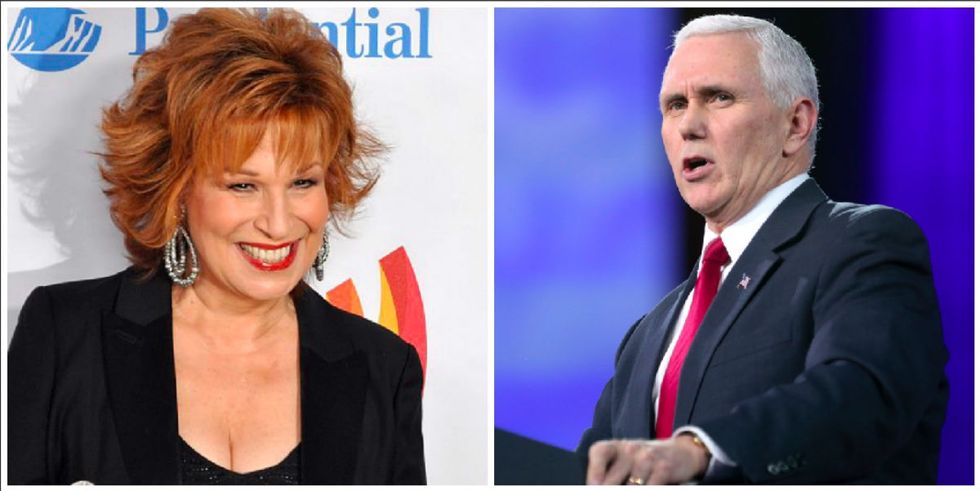 Mike Pence and conservative activists want Joy Behar to apologize on behalf of "offended" Christians everywhere, but it turns out that outrage is manufactured purely to score political points.

It all began back in February when "The View" co-host took part in a segment on whether the vice president's religious views are good for the country.

After two of her co-hosts mocked the VP for reportedly claiming to speak directly with Jesus Christ, Behar quipped, "It's one thing to talk to Jesus. It’s another thing when Jesus talks to you. That's called mental illness, if I'm not correct — hearing voices."

Pence said that Behar and ABC should apologize to all Christians for using "The View" as "a forum for invective against religion like that." Behar apologized to Pence in a private phone call after poking fun at him.

Behar's manager claims Pence told her he wasn't personally offended. "The vice president was very gracious and very understanding. He understood that Joy wasn’t attacking anybody and that there was some miscommunication."

The apology demand appears to have been a manufactured campaign from a right-wing interest group.

Why did Pence allegedly strike such a different tone in private versus his harsher public comments?

It might have something to do with the Media Research Center, a conservative advocacy group whose function seems to be to attack people and institutions in the media it feels reflect a bias against conservative views. Since Behar's comments last month, the group has been organizing a petition campaign among its members and has reportedly made 30,000 complaint calls to ABC.

All of which seems a little odd, given that Pence accepted Behar's apology weeks ago.

Nonetheless, it's possible Behar still owes an apology — but it's not to the conservative media activists now trying to create a controversy around a perceived persecution.

If Behar owes anyone an apology, it's to those affected by mental illness.

Whether she was right or wrong, it was a decent move on Behar's behalf to offer Pence a public apology. And if the reports are accurate, it sounds like Pence also was gracious during their call.

But let's not lose sight of the fact that her joke was absolutely not an attack of Christians or any of faith for that matter. Generating false outrage to score political points doesn't seem like the good samaritan thing to do.

Instead, the next positive step could be for Behar and Pence to agree that jokes referencing mental illness should remain off-limits, and they can take their political disagreements elsewhere.