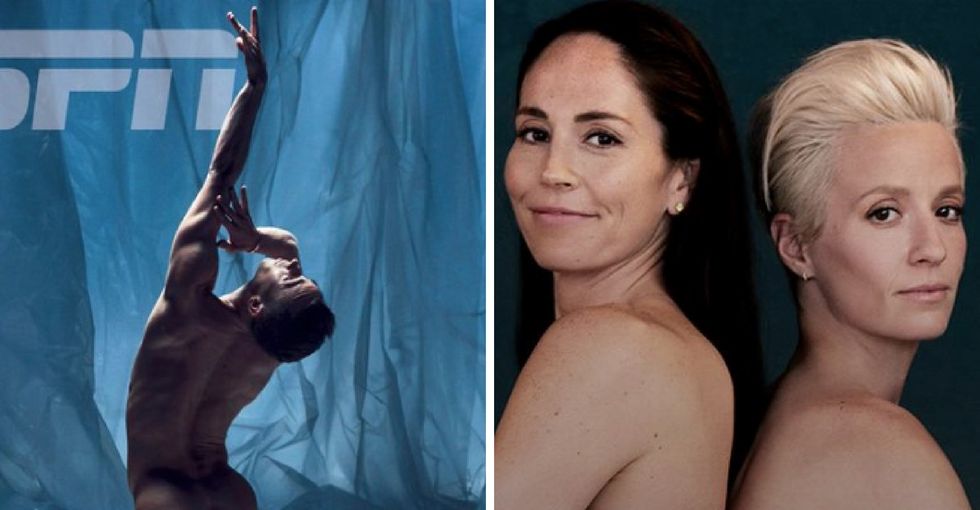 Warning: Some images in this article show partial nudity and may be NSFW.

Tall? Short? Slender? Buff? There's no right or wrong answer, really. They come in various sizes, shapes, colors, sexual orientations, and genders, with all sorts of abilities and disabilities too.

ESPN magazine has been helping challenge misperceptions about athletes and their bodies since its annual Body Issue debuted in 2009. And this year's edition is continuing to push boundaries in exciting ways.


For the first time, same-sex partners appear together in the much-anticipated issue.

WNBA star Sue Bird and her partner soccer player Megan Rapinoe snapped pics for the publication, and the photos are pretty darn fantastic.

"It's pretty amazing to think about [being the first same-sex couple], especially in the times we're in," Rapinoe told the magazine. "Just think of how far we've come, but also the current climate and defiance in the face of that. Not only are we female athletes, but we're dating as well. It's kind of badass."

“I couldn't have done this [shoot] while I was in the closet," Rippon said. "I think that, with my experience of coming out, I felt so liberated in so many ways.”

The magazine has also made strides to celebrate different body types and athletes with varied experiences outside of sports.

Transgender triathlete Chris Mosier continued breaking down barriers in 2016 with his feature in the magazine.

🎉 YES!! The full @espnmag Body Issue is now online, with extras from me you didn't yet see. Honored to be one of @espn's Bodies We Want 2016! Grab it in print on Friday. 📷 by @benedict_evans grooming @brandiebeauty #bodyissue2016 #transathlete #duathlete #triathlete #transman #courage #nodaysoff #nobaddays #bodyissue

Young people are watching sports — and reading magazine spreads. And when they can see themselves in the stars on a soccer field, or Olympians in an ice skating rink, it makes big dreams much more achievable.

"I think it's important to do these things first," Rapinoe told ESPN for this year's issue. "It's important for people to come out. Visibility is important."

Check out a preview gallery of the 2018 Body Issue before it hits stands on June 29.