It was the kiss seen around the world. How Abby Wambach is challenging homophobia in sports.

We've seen it hundreds of times before: An athlete wins a championship, then rushes to embrace their significant other. So what makes this any different? 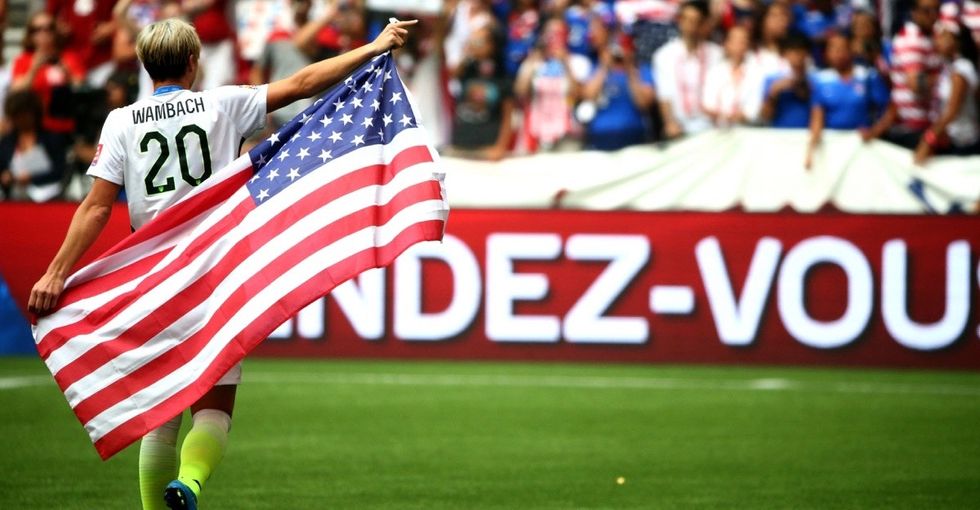 Arguably one of the greatest soccer players in U.S. history, Abby Wambach is finally a World Cup champion.

Making her fourth tournament appearance since joining the U.S. Women's National Team in 2001, Wambach ended the 2016 World Cup a champion for the very first time — but that's not what the world is talking about the morning after.

Instead, they're focused on something she did that countless athletes have done before as they basked in the glow of victory: She kissed her wife.

As soon as the final whistle was blown, Wambach rushed to the sidelines to find and kiss her wife, Sarah Huffman.

It was a beautiful moment with major potential to, as BuzzFeed said, "destroy your tear ducts."

Though Wambach and Huffman have been married since 2013, their kiss seemed like the perfect follow-up to June's marriage equality decision.

Both Huffman (a former professional soccer player herself) and Wambach have been involved with the LGBT sports organization Athlete Ally. However, Wambach has made clear that their relationship is about love — as most relationships are! — not politics.

After their wedding in 2013, Wambach said:

"I know that I'll end up being a role model for many, many people out there for all kinds of reasons. My first hope is for being a genuine, honest and good person, then a great soccer player and then down the line, the choice I've made to marry not only my best friend and teammate, but the love of my life. ... I can't speak for other people, but for me, I feel like gone are the days that you need to come out of a closet. I never felt like I was in a closet. I never did. I always felt comfortable with who I am and the decisions I made."

Wambach and Huffman at a party thrown by ESPN earlier this year. Photo by John Parra/Getty Images for ESPN.

Why is this a big deal? Well, sports have not exactly been the most LGBT-inclusive places for fans and athletes.

Just earlier this year, a study confirmed what many already knew: There's a lot of homophobia in the sporting world, especially in the United States.

After being drafted by the St. Louis Rams in the 2014 NFL draft, football star Michael Sam kissed his boyfriend on camera, sparking outrage in the media. During last year's Men's World Cup, homophobic chants from the stands were common enough to the point that FIFA felt the need to investigate.

So, yeah, even just a little bit of same-sex PDA can be a big deal.

A Getty Image caption for one of the photos originally referred to Huffman as Wambach's "friend." Once people on Twitter pointed this out, the captions were updated accordingly.

But overwhelmingly, the Internet celebrated with the team and the happy couple.

Congratulations, Abby Wambach and the U.S. Women's National Team! You did it!