In one tweet, Pink nails why we talk about aging all wrong 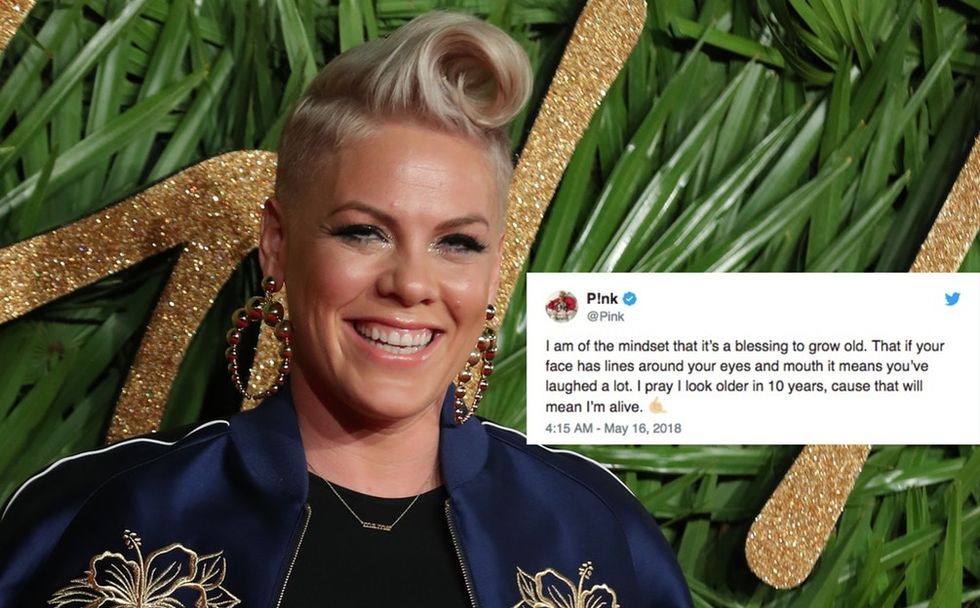 The multi-award winning (Grammys, Emmys, Brits, she's even got a couple of VMA Moon Men), best-selling, stadium-filling artist is a legend.

Even if you're not a fan of her music, it's easy to get behind someone who preaches self-love so consistently (she made a PowerPoint of her daughter's comment about feeling "ugly") and has no time for haters. She didn't take insults laying down when people came for her weight, or when she read mean tweets on "Jimmy Kimmel."

So when a Twitter troll came at her about "being old," you best believe she wasn't about to let that slide.

Pink gave a master class in how to respond to ageism.

Yesterday, a Twitter-user suggested that the 38-year-old artist might be past her prime.

While Pink's initial response was a little harsh, the artist then dropped some valuable knowledge about aging, and why it isn't something to be ashamed about.

All of us should embrace every line and wrinkle. Why? Because it means we're still out here, living, raising hell, and creating meaning out of this big old mess of a world.

The mean tweet once again reveals the immense pressure women everywhere are under "not to age."

While men are praised for looking "mature," "debonair," and "distinguished," as women age, the media and the fans criticize them for not doing it in a way that is deemed "appropriate."

As more people with platforms speak out about it, the more we can become aware of the toxic culture around women's worth, and what determines it, actually is.

In a perfect world, Pink wouldn't have had to drop this perfect response.

We're not there yet, but even simple clapback tweets are a step in the right direction.

Until the only questions asked about Pink and all women in the limelight are "Is she talented?" or "Is she rocking the arena?" or "Do you get entirely too emotional when that one song about 'giving just one reason' comes on the radio?," we'll cheers to this pop-punk goddess.

Plus, it's clear Pink's not slowing down anytime soon.

Keep ReadingShow less
black-coffey cavern
Get stories worth sharing delivered to your inbox
By signing up you agree to Upworthy's privacy policy.
More

A fascinating look at driver psychology.

A person of color uses a crosswalk.

This article originally appeared on 11.01.17

You missed a study that illuminates the very real dangers of literally "walking while black."

In addition to rogue police officers targeting people of color on the street, a study from Portland State University found that drivers are less likely to stop for black pedestrians.

This article originally appeared on

Warren Buffett isn't just rich. He's known for being ethical, straightforward, and wise. And also generous. Not just with his money but with his ideas.

Buffett straight up spelled out how he makes decisions on how to invest in and acquire businesses in a public letter sent to his shareholders. To be clear: His instincts and insights are what have made him such a rich man. And that's what he's sharing so openly with the world.

Maybe they could help the rest of us think through some tough decisions in our own lives? Let's see.

Sober bars and events are growing in popularity with delicious, grown-up alternatives to alcohol.

For as long as there's been alcohol, there have been people who don't drink it. Some don't care for the taste, some don't like the buzz, some have religious prohibitions against it and some are recovering addicts who need to avoid it altogether.

Whatever reasons people have for not drinking, there's an unspoken attitude by some that they're missing out on a key part of social culture, especially when countless movies and TV shows portrays people winding down (or wooing one another) with wine and bonding over beers at bars. There's an air of camaraderie over sharing a cocktail or clinking champagne flutes together that's hard to capture with a basic Coke or sparkling water.

But what if you want that fun, social atmosphere without the alcohol? What if you want to go out and have fancy, alcohol-free drinks with your friends at night without being surrounded by drunk people? Where do you go for that?