In a special Oval Office address, President Obama laid out how to fight terrorism, with freedom.

In just his third time addressing the country from the Oval Office, Obama set out to calm a country on edge. 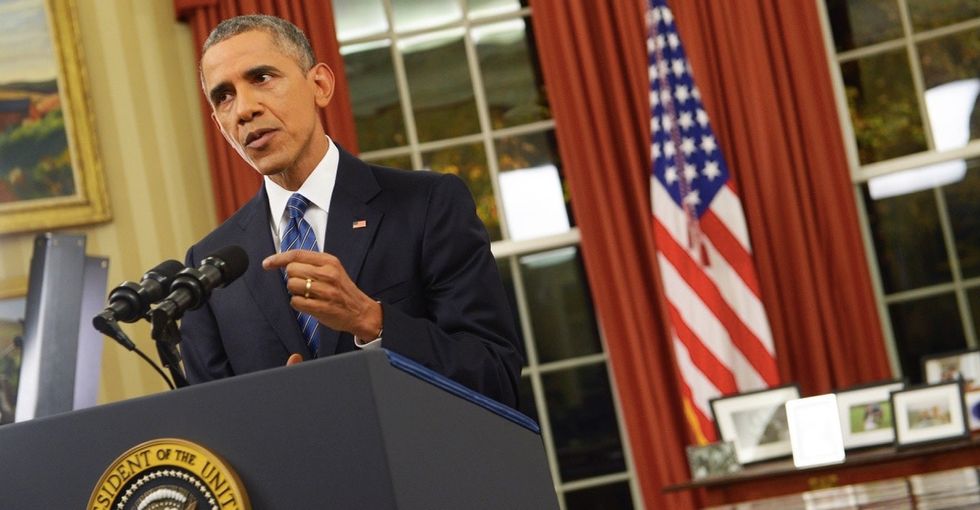 On Sunday night, President Obama addressed the nation to discuss last week's attack in San Bernardino and the broader threat of terrorism. In his 13-minute prepared remarks, the president outlined the administration's ongoing strategy to take on ISIS.

"As commander-in-chief, I have no greater responsibility than to the safety of the American people."

But what stood out most in his speech was the amount of time the president dedicated to reinforcing one of the most core American values: religious freedom. While both the husband and wife who carried out the San Bernardino terrorist attacks were Muslim, the president urged the American people to resist the urge to ascribe the motivations of the attackers to Muslim-Americans as a whole.

In the first half of tonight's speech, President Obama unveiled a four-point plan to fight terrorism, but what he said after that was just as important. Photo by Saul Loeb-Pool/Getty Images.

His message was especially important since anti-Islam rhetoric has grown increasingly hostile after the attacks in Paris and San Bernardino.

And it seems to be having a very real and dangerous effect.

Since the Paris attacks, the rate at which London Muslims have been physically attacked has tripled.

Last month, armed "protesters" began keeping watch outside an Irving, Texas, Islamic Center, with the goal of stopping the "Islamization of America."

On Friday, Liberty University President Jerry Falwell Jr., urged students to arm themselves so that they may "end those Muslims."

The truth, however, is that whatever ideology the attackers in Paris or San Bernardino subscribed to, it's not that of mainstream Muslims. Wrongly painting all Muslims as "terrorists" puts innocent lives at risk. It's important to not paint with too broad a brush, especially given the outpouring of support the Muslim community has shown for victims and their families.

This speech was a big deal. The Oval Office is typically reserved for only the most serious matters of national unity.

It's been the setting for huge moments in our history. It's where President Reagan discussed the Challenger disaster, where President Kennedy called on Congress to pass what would become the Civil Rights Act. This was only the third time President Obama addressed the nation from the Oval Office — the other two times in 2010 to discuss the BP oil spill and to announce the end of combat operations in Iraq.

That's how essential the topic of Sunday's speech was.

Oval Office addresses have been a rarity, especially during Obama's presidency. Photo by Saul Loeb-Pool/Getty Images.

It's an important conversation to have. Here are the best moments from the president's speech.

After the attacks in Paris, some politicians floated the idea that the U.S. should turn away Muslim refugees. The president publicly opposed that idea, and he renewed that sentiment again.

On the San Bernardino shooting:

While the president stressed that there's no indication the perpetrators of the San Bernardino shootings had any formal ties to terrorist organizations, they are terrorists, and what they did was an act of terrorism.

Prior to the San Bernardino attacks, the president called on Congress to block people on the terrorism watch list from purchasing guns. During his speech, he renewed that call. Last week, the Senate blocked that move.

"The values that we are fighting against ISIL for are precisely that we don't discriminate against people because of their faith," Obama said after last month's attacks in Paris. "We don't kill people because they're different than us.

That's what separates us from them. And we don't feed that kind of notion that somehow Christians and Muslims are at war."

We need to be strong, and we cannot give in to fear.

You can watch President Obama's full address below.