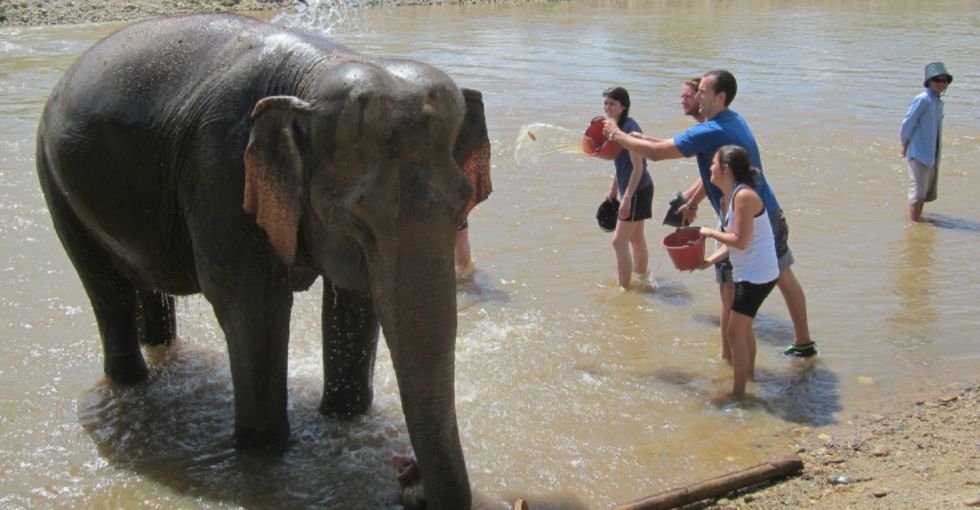 If you traveled to Thailand, Vietnam, or India five years ago, chances are you were offered an elephant ride.

For many travelers, the opportunity to perch atop an eight-foot, 6,000-pound animal while slowly lumbering through a lush rainforest was at the very top of a bucket list.

It’s a different story if you’re looking for an elephant ride in 2016. Many tour companies, led by Intrepid Travel, are banning the popular activity from their tours.

Well, to understand that, you first might want to understand a few things about elephants and what making them "ridable" entails.

Studies have indicated that like us, elephants are empathetic creatures — they help each other in distress, grieve for their dead, and feel emotions.

A 2013 study conducted on Asian elephants found that they comforted each other both physically and verbally in times of distress, making small noises while simultaneously stroking each other with their trunks in a show of empathy that's similar to chimpanzees.

African elephants will also scatter the bones of their dead. And some scientists even think that elephants cry real tears. While scientists aren't 100% certain, there is research that suggests that elephant tears are associated with grief and loss.

There are even case studies that show elephants performing acts of altruism and heroism for other elephants. In a famous study in 2006, researchers observed elephants' behavior toward a dying matriarch (who they dubbed Eleanor) and found that one elephant tried to rescue the dying elephant. When Eleanor did die, elephant families from miles around came to pay their respects.

Because elephants are such intelligent and emotional animals, it can be easy to believe they enjoy performing for and interacting with humans, like many domestic animals do. But that's not the case.

Elephants are wild animals, not domestic ones like dogs and cats. They're complex social animals that have to endure severe trauma to be ridden.

In order to get them to carry people on their backs, paint pictures, or play with soccer balls, young elephants need to be broken, a process that's often referred to as "the crush" in places like Thailand.

A centuries-old practice that's been handed down throughout generations, "the crush" or "phajaan" as it's called in Thai literally means the process of breaking a young elephant's spirit. When the elephants are young, they're stripped from their mothers, tightly bound, beaten with long sharp spikes, and cruelly deprived of food and water.

If all of this sounds terrible, know that there's some good news. The tide is finally turning on elephant rides.

Tourism companies across the board are making the ethical choice to not put elephant rides on the menu. More than 100 travel agencies, led by Intrepid Travel, have pledged to remove elephant rides, including shows with elephants, from their itineraries.

PETA has been pretty vocal about the treatment of elephants and started reaching out to travel companies about it in the last few years. After PETA initially reached out to Intrepid Travel, the travel company wanted to know more. So, they lent support to the research of captive elephant venues conducted by World Animal Protection.

It turns out that the demand for elephant rides had also caused a dramatic increase in elephant poaching — specifically in places like Southeast Asia where elephants were already endangered. And, the research found that only 3% of elephant tourism offerings in Southeast Asia treated elephants humanely.

Because of this, Intrepid Travel decided to change their rules and also teach fellow travelers to be mindful of attractions, like elephant rides, that actively exploit animals. They also run a not-for-profit, The Intrepid Foundation, that lets tourists contribute to the company's efforts to help improve animal welfare, stop human trafficking, and eradicate poverty — all while exploring the world.

There are many ways to appreciate the beauty and majesty of elephants in a humane setting.

If you still want to make sure you can catch a glimpse of your favorite tusked friends, there are a host of other organizations that rescue and rehabilitate elephants. Instead of riding an elephant, try visiting Thailand's Elephant Nature Park or donating to the friends of the Asian Elephant hospital — the first hospital to provide an elephant with a prosthetic leg.

Greenwashing (making something look sustainable and ethical when it really isn't) can be common when tourists and elephants are involved, so if you're unsure about an activity, it can be helpful to check watchdog organizations (like PETA or Traffic) that are closely monitoring animal tourism.

When companies pave the way for ethical travel by making sure that all animals are loved and respected along the way, everybody wins.