Syeda Ghulam Fatima is shedding a light on a dire issue facing millions of Pakistanis. 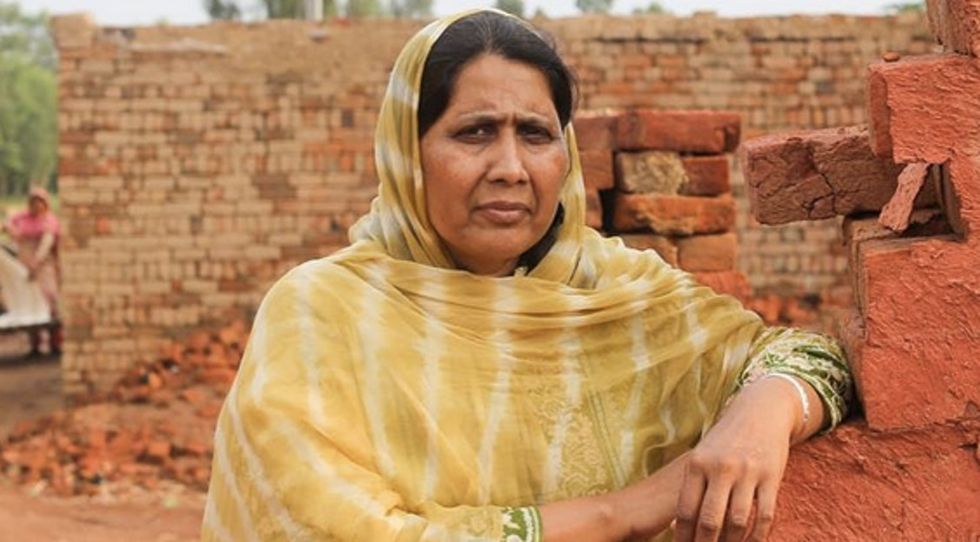 Yes, a picture is worth a thousand words. But this one is also worth millions of dollars in the fight for human rights.

This was the first of six images photographer Brandon Stanton shared of Pakistani activist Syeda Ghulam Fatima on his Instagram account.

Stanton — who runs the popular Humans of New York photo blog capturing the diversity of New Yorkers — posted that first image of Fatima on Aug. 15, 2015, during his travels overseas.

Throughout the following four days, support has poured in from across the globe to help the cause Fatima is fighting for: ending widespread bonded labor in Pakistan's brick kiln industry.


Pakistan is one of the world's worst offenders when it comes to modern slavery, and the country's brick kilns have been ground zero for the human rights abuse.

Brick kiln owners often manipulate workers by providing them with loans they desperately need and then imposing sky-high interest rates. Because workers can't possibly pay back the loan and interest with their paltry earnings, they're trapped in debt that's only repayable via manual labor.

This widespread exploitation is precisely why Fatima is fighting for justice.

Fatima — who's been "shot, electrocuted, and beaten numerous times for her activism," according to HONY — has dedicated her entire life to bringing visibility and protections to brick kiln workers. That's why, as Stanton pointed out, she's been described as the "modern day Harriet Tubman" of Pakistan.

Inspired by Fatima's bravery, Stanton set up an IndieGoGo page to benefit the organization Fatima created, the Bonded Labor Liberation Front. The group empowers kiln workers through its Freedom Centers (just one of its many projects), where workers can find protection and legal counsel.

HONY followers have been quick to support Fatima's cause (to say the least).

The Bonded Labor Liberation Front can use every penny. Fatima's work is a lifeline for so many in Pakistan right now. Despite the fact that Pakistan banned slavery more than two decades ago, bonded labor in the brick kiln industry has created a modern-day form of it that affects roughly 4 million Pakistanis, the organization estimates.

The 2014 Global Slavery Index found that Pakistan had the sixth highest prevalence of slavery in the world.

A brick kiln worker in Lahore, Pakistan (above) told HONY: “My sister's kidneys were failing. We tried to raise the money to save her. We sold our cattle. We sold our property. We sold everything we had. When we ran out of options, I took a 5,000 rupee loan from the brick kiln."

The man said that, because of the manipulative loan system in place, he now owes 350,000 rupees — a debt that will likely get passed on to future generations of his family.

There are thousands of brick kilns in Pakistan, which gives the industry enormous clout and political power. Regulations intended to protect workers are rarely enforced. Police and local officials are often corrupt, protecting kiln owners from the law.

Fatima and a kiln worker, who told HONY he'd started working at the age of 12 and was once beaten by kiln owners for attempting to unite workers in demanding better wages.

"This system of bonded labor can only exist in the darkness of ignorance," HONY wrote on the fundraiser page. "If Fatima succeeds in her goal of providing education, legal assistance, and rehabilitation to every bonded laborer in Pakistan, the system will naturally collapse."

Stanton mentioned the total fundraising figure will have a profound effect in Pakistan because as the purchasing power of a dollar there is roughly five times greater than in the U.S.

"I don't think I have the words to tell you how grateful we are," Fatima said in a statement Stanton posted on HONY's Facebook page, noting that the Bonded Labor Liberation Front is currently figuring out how to best spend the funds.

"The prayers of every laborer are with you and they will always hold you in their hearts. Our responsibility now is to honor what you have trusted us with, and we will."