'How many straight rom-coms do we need?': Jim Parsons fiercely defends 'Love, Simon.' 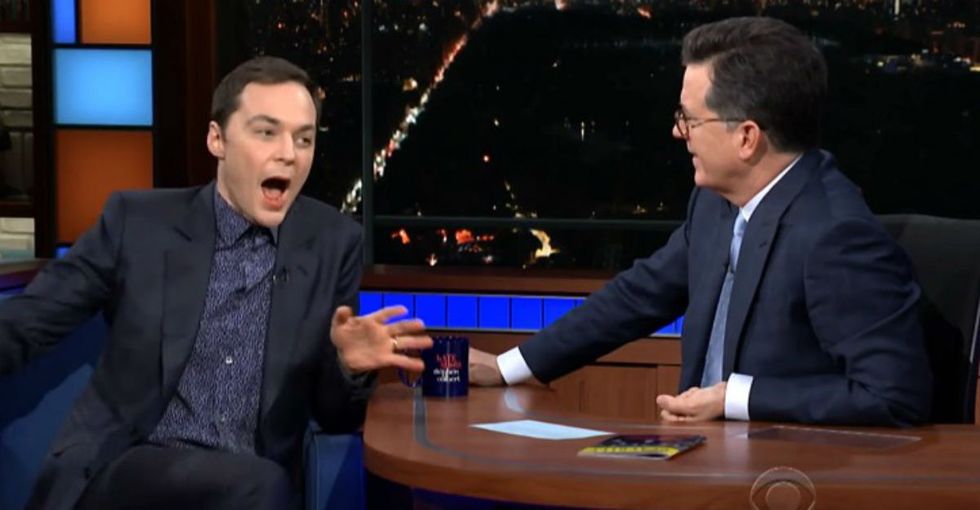 How many romantic comedies starring straight couples have been made since the dawn of time?

A thousand? A million? There have been a lot!

Americans haven't suffered from a straight rom-com shortage since rom-coms became a thing — "Annie Hall" in 1977, "The Apartment" in 1960, or maybe even "It Happened One Night" way back in 1934.

Rarely do you hear complaints from moviegoers about Hollywood churning out too many of them.

Which is why Jim Parsons has had it.

The actor visited "The Late Show with Stephen Colbert" on May 7 to promote a reboot of the gay-themed Broadway show "The Boys in The Band." As the conversation veered into the need for more LGBTQ representation in theater, film, and beyond, Parsons revealed one thing that irked him about the criticism aimed at the film "Love, Simon" earlier this year.

The teen rom-com — the genre's first to star a gay lead while also boasting a big budget — was dinged by some critics for arriving in theaters about a decade too late. "'Love, Simon' Is a Groundbreaking Gay Movie," one headline announced, "But Do Today's Teens Actually Need It?"

According to Parsons, the answer is a resounding yes.

The wide release of "Love, Simon" meant an LGBTQ-themed movie for teens was in most movie theaters across the country. That's never happened before. And for a gay kid in, say, small-town Kansas, that matters.

"I read a couple of articles that were essentially saying – I loved ['Love, Simon'], by the way — but there were a couple articles that were like, 'That's too late.' ... That we're beyond this now — the kind of tale of coming out that this was. And I thought, 'Maybe if you're a 30-something writer living in New York or L.A. it may be like, 'I don't need to see this,' obviously. But I don't know – I think there are people in many other places that, yes, you do still need to see it."

Parsons then pointed out how absurd it is to argue a gay rom-com is "too late" to make a meaningful difference when no one holds straight rom-coms to the same standard:

"Never mind the fact [they're saying] 'a gay rom-com — it's too late.' Well, tell that to 'When Harry Met Sally,' you know? Which was brilliant, but I'm saying, 'How many straight rom-coms do we need? When is it too late for them?' You know?"

Check out the interview below.

Parsons begins talking about "Love, Simon," at about the 7-minute mark.

We often eat up straight rom-coms faster than the popcorn kernels in our buttery palms without thinking twice about their relevance to the social consciousness of the day.

Yet with rom-coms featuring marginalized lovebirds, there seems to be a different standard. Did "Love, Simon" explore queerness in a positive way? Was it relatable enough for LGBTQ teens? Was it timely enough to make a difference? Did it revolutionize the fight for LGBTQ equality in 1 hour and 50 minutes of screen time?!

This is exactly why we need more rom-coms featuring LGBTQ people from all walks of life — people of color, people of minority faiths, disabled people, and everyone else. That way, the few films featuring marginalized people that do get made won't bear the brunt of cramming the experiences of an entire group into one trip to the movies.

Or, as Parsons quipped, to laughs: "Let me get sick of too many gay rom-coms, then, thank you very much. Bring it on."