He wanted to do something beautiful for his dying wife. The Buy Nothing Project delivered.

People join for the free stuff, but they stay for the community. 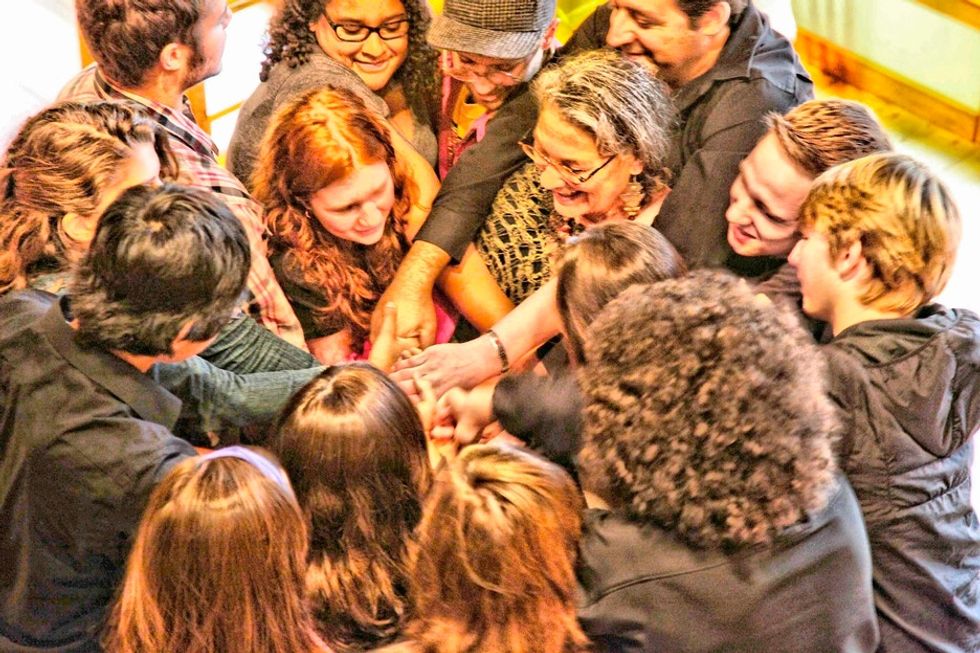 He wanted something beautiful to welcome his dying wife home for the last time.

When the man, who will remain anonymous by request, thought about bringing his dying wife home from the hospital, he wished for something beautiful there to greet her.

Hospital bills are pricey and he knew he couldn't afford to bring his dream to life. So, unable to make it happen himself, he posted his wish to a Facebook group in his local community.

And lo and behold, when the man and his wife pulled into their driveway, they were shocked and delighted to find that their neighbors had filled the porch with hundreds and hundreds of beautiful flower bouquets.

This photo, provided by the Buy Nothing Project, shows just a few of the bouquets that began showing up on the man's porch the day he brought his wife home.

The Facebook group that the man posted to? It's called the Buy Nothing Project. And it's so much bigger than just random acts of kindness and generosity.

Buy Nothing Project co-founder Rebecca Rockefeller says that the idea for the group originally started two years ago with something really simple: a bunch of green beans.

Rockefeller had a small yard with lots of shade, and was frustrated to find that the only thing her garden would grow was green beans. So she turned to her friend (and BNP co-founder) Liesl Clark, who offered to toss some of her own vegetables into a communal basket.

Soon other friends were pitching in, too. They traded bread for eggs, and vegetables for milk. But Rockefeller wanted to take it one step beyond trading. "I remember thinking: What if we did this not as a trade, but as a thing where literally anyone who comes to the local park can just grab what they need from a big table?" That was two years ago.

Today, the Buy Nothing Project is a worldwide social experiment — all about giving.

There are more than 1,000 Buy Nothing Project Facebook groups where 500,000 people offer up goods and services to their neighbors, all for free.

In this photo, a group of high schoolers joins a psychologist in a group bonding activity. The psychologist volunteered her time, through the Buy Nothing Project, to talk about difficult issues with the students. Photo via Liesl Clark.

Through the Buy Nothing Project, no money changes hands and people don't barter or trade.

Instead, they just give away things they don't need or services and skills they can offer.

"I remember thinking: What if we did this not as a trade, but as a thing where literally anyone who comes to the local park can just grab what they need from a big table?" — Rebecca Rockefeller

As Clark writes on the group's website, "[The Buy Nothing Project is] a Facebook group that'll give you a hands-on chance to take part in a social movement spreading across the country, enabling people and communities to commit episodic acts of daily good together."

Rockefeller says that people come to the Buy Nothing Project because of the free stuff ... at first.

"Let's be perfectly honest: Who doesn't like free stuff?" Rockefeller tells Upworthy, laughing. "They join because of the stuff. But then they stay because of the gratitude."

The Buy Nothing Project defines "giving" in broad terms and sees generosity in many forms. "It could be dinner, a class, even tree trimming," Rockefeller says.

Sometimes people give small things, like a salad dressing they bought but hated or a screw they found that doesn't fit with anything in their house. Maybe their neighbor wants the salad dressing! Or a friend might just happen to have a dresser that's missing a screw!

Sometimes people give big things, like this BNP group that came together to give a couple a wedding where almost every item came from their neighbors (for free!).

Yep, a free wedding! I know, I know. It's a thing of dreams. Photo via Buy Nothing Project.

Through BNP, people offer to teach new skills, like this local master chef who taught her neighbors to make a delicious meal.

Buy Nothing Project members take photos of the meal they prepared with the master chef in their community. Photo via Liesl Clark.

And people request acts of kindness, like this BNP member who asked for 100 birthday cards for their grandfather's 100th birthday.

"On January 13, 2015, my grandpa advances to the age of 100, and joins the centenarian club :') WOW! I'm borrowing an idea from my friend to get 100 cards to him before his birthday," a Buy Nothing Project member wrote. Photo via Buy Nothing Project Facebook page, used with permission.

Sometimes, the idea of giving is even a little more abstract and intangible, like a BNP group who enjoyed an hour of free ukulele music in Seattle.

Who doesn't love a good ukulele session? Photo via the Buy Nothing Project.

So what can we learn from the magic that is the Buy Nothing Project?

"Philosophically, we want to get people thinking differently about our stuff and our time and what we do with it," Rockefeller says.

She hopes people can learn to look at material goods as collective resources that can be shared when communities come together, rather than as commodities.

As Rockefeller explains it, this kind of communal sharing can only happen when people stop attaching their self-worth to what they own and start identifying instead with how well they give to their communities.

"To us, this whole thing is an experiment," she says. "We're watching it unfold and learning a lot about human behavior."

The biggest lesson so far? Whether it's salad dressing or flowers for a dying woman, giving can make us feel a lot more connected than receiving.

From Your Site Articles
Related Articles Around the Web
teachers
Heroes