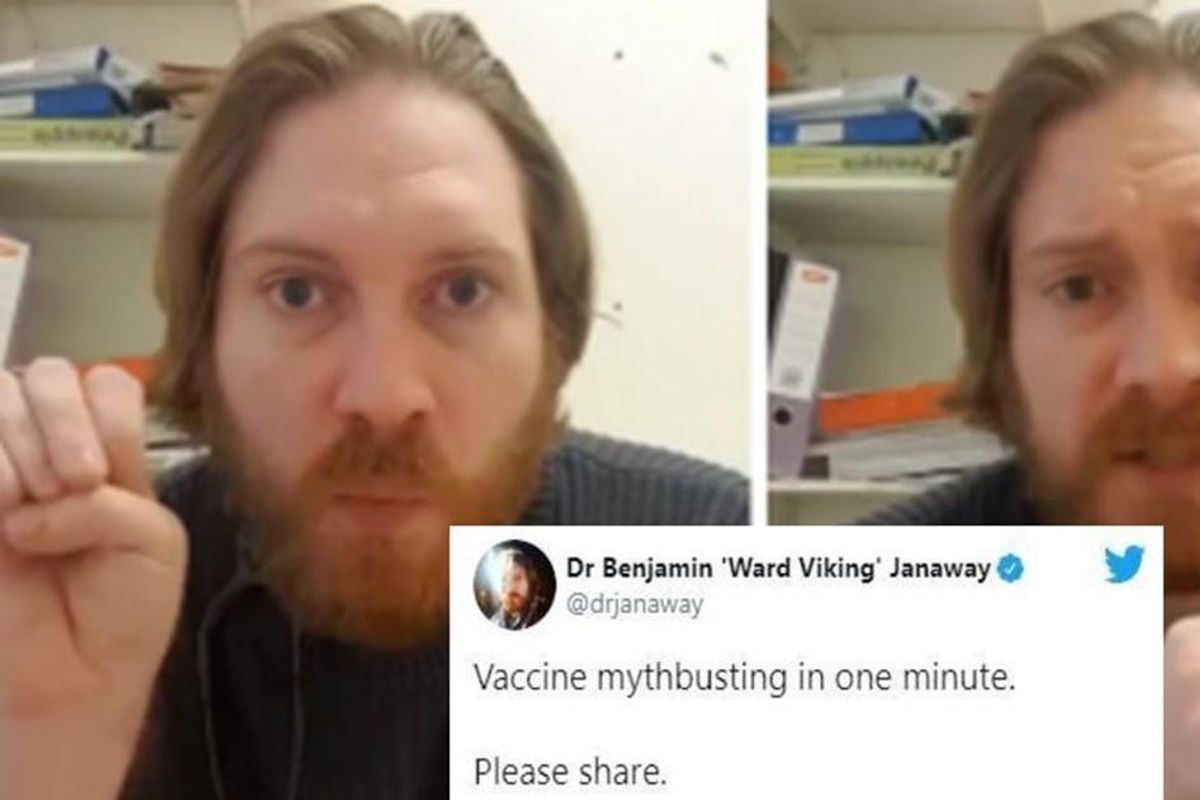 The battle against COVID-19 is a multi-front war. It's not just a fight against a biological enemy but a misinformed public as well.

Dr. Benjamin Janaway is a doctor at the UK's National Health Service and a science communicator. He's using social media to fight hard against COVID-19 misinformation so we can succeed against the virus.

He recently outlined the crux of the battle on Twitter.

"But consider the makers of the new Covid Vaccine, they must not just fight against the limits of science, but the ferocious and uninformed attacks of Hollywood celebrities, which on a one-to-one basis, most people aspire more to and entrust more than a distant 'nerd' a government and media have made their enemy before the start," he wrote.

"It's tough to develop a novel treatment using mRNA technology, push for social distancing, and argue with Laurence Fox at the same time," he added.

(For those who don't live in the UK, Fox is an actor who got into it with Janaway on Twitter over the COVID-19 vaccine.)

Janaway also shared a video on Twitter where he debunks conspiracies and myths about vaccines that are frequently shared on social media by anti-vaxxers.

The great thing is that he shuts down the entire movement in one minute flat. So even conspiracy theorists with short-attention spans can get the message.

Janaway starts out by explaining why vaccines are so great at stopping the spread of deadly diseases.

"Vaccines are made of an inert or dead form of a virus inserted into the body so the body's white blood cells — i.e. its immune system — can develop a natural immune response, so when encountering a wild-type version of a virus, it breaks it down without any symptoms," Ben says. "This breaks the chain of infection and reduces deaths. Millions, in fact."

Then, he debunks popular falsehoods spread by the anti-vaccination movement.

"The link between vaccines and autism and vaccines and Alzheimer's has been completely disproven by large-scale studies," he adds. "There are no dead babies, bits of dead babies, or bits of anything else in a vaccine that is going to harm you. This is all myth," he explains.

He did admit that there are some extremely rare side effects that come from vaccinations. However, none of them come close to the damage that can be caused by COVID-19.

"The actual risks of vaccines are: there is a risk of anaphylactic shock, which is vanishingly low; a risk of allergic reaction to foodstuffs that can be used (and they will ask before they give it); risk of local tissue damage (well, it is putting a needle in somebody); and a small risk of more general tissue damage, but once again, this is extremely low," Janaway says. "You may get a few symptoms which is the body's immune reaction, but not the virus itself."

In the end, beating this virus is all about taking personal responsibility. Taking care of ourselves by wearing masks, keeping a safe distance, staying informed, and confronting misinformation, we can create an environment where other people stay healthy as well.