Andy Richter shared an honest story about what abortion access meant to his family. 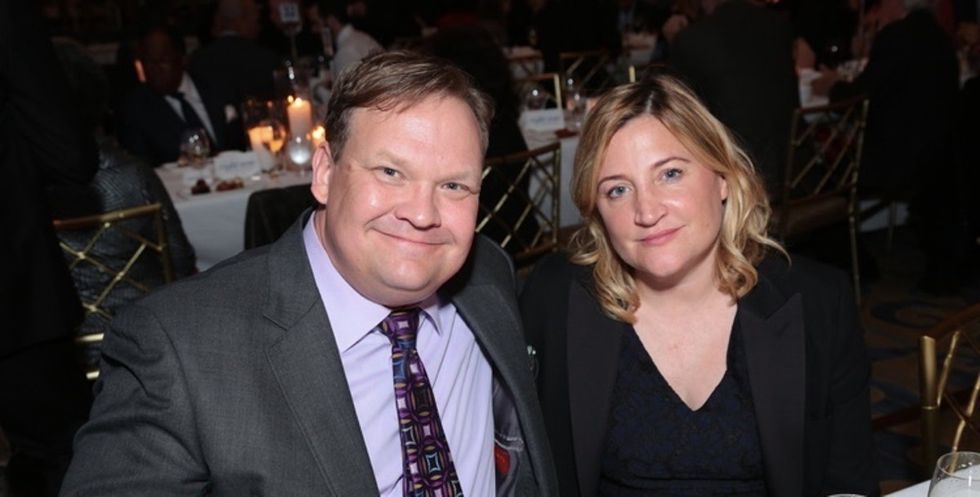 You may also know him as the guy who absolutely crushed CNN anchor Wolf Blitzer on "Celebrity Jeopardy" to raise money for St. Jude's Children's Research Hospital.

Andy and Conan probably up to some shenanigans. Photo via Team Coco/YouTube.

Other than that, though, he keeps a relatively low profile.

Recently, Richter was invited to speak at the Sexy Beast Gala for Planned Parenthood, where he shared a surprisingly personal and meaningful story.

"In 1992, my girlfriend and I were having a rough time. We’d been performing in a show together for a couple of years, but it had come to an end, and we found ourselves living apart. She was in New York City working three jobs; I was in Chicago jobless and sleeping on my mother’s couch. The strain of living apart, and the stress of being two young people attempting to make a living as performers and writers was really taking a toll on our relationship. So when she called me to tell me that she was pregnant, it was not exactly happy news."

Richter went on to explain that in that difficult moment, he was immensely grateful for the existence of Planned Parenthood.

"Luckily for us, Planned Parenthood existed. My girlfriend knew that she was not ready for motherhood, and I knew that I was in no way prepared to be a father. I drove from Chicago in my battered old Toyota pickup to be with her when she went to Planned Parenthood to terminate her pregnancy.

Shortly after, the stress and strain of their long-distance relationship took its toll, and Richter and his girlfriend broke up.

But not for long, he explained:

"What seems like five minutes after that, we realized that breaking up was the stupidest thing we’d ever done. So we got back together, and we got engaged, and we got married, and we had a couple kids, and a parrot and two dogs. And so far, we’ve been married for 22 wonderful years.

Planned Parenthood gave two young struggling people the ability to do the thing that is in their name: We got to plan parenthood.

When we could barely care for ourselves, much less a newborn, we were able to choose the time when we brought a child into our lives. Planned Parenthood allowed my wife to make the decisions she needed to make in order to control her body and her health, and maintain her life and her future. And for that, I will be eternally grateful."


Andy Richter (far right) and his family in 2015. Photo via Team Coco/YouTube.

Despite the fact that the procedure is common and has been federally legal for 43 years, abortion is still vilified, stigmatized, and blatantly misrepresented in the media.

In November 2015, three people were killed at a Planned Parenthood in Colorado Springs when a man walked in and opened fire. It was mere months after an anti-abortion group started releasing misleading videos about Planned Parenthood's practices.

The more people like Richter share their positive experiences with abortion, the more we can change the conversation around it.

In August 2016, actress Naya Rivera revealed in her book that she had an abortion while shooting "Glee." She told People that she made the decision to publicly share that part of her life because abortion "is not something a lot of people talk about. ... But I hope someone out there gets something out of [her story]." Comedian Chelsea Handler, "Girls" actor Jemima Kirke, and rapper Nicki Minaj have also opened up about their own experiences with abortion in recent years.

The reality of abortion is in stories like Andy's, Naya's, Chelsea's, Jemima's, and Nicki's. It's in the stories of the 1 in 3 women who will use their right to an abortion in their lifetimes.

In Richter's case, he and his then-girlfriend, now-wife faced a difficult decision and had to make a choice. The choice they made allowed them to start a family on their own terms, when they were ready to support one.

On a broader scale, safe access to abortion helps make society better for everyone by reducing child abuse, narrowing the gender gap, reducing crime, and (like it did for Richter and his wife) strengthening relationships — as people aren't forced to bring a child into the world that they don't feel equipped to take care of.

Every story like this that gets shared helps correct the misinformation that has been spread by the anti-abortion movement. These stories help the millions of people that Planned Parenthood reaches every year feel more secure in their ability to exercise their right to make decisions about their health, their safety, and their lives. And that's a good thing.