A terrible tweet about depression has the internet in an uproar.

J.K. Rowling and Patton Oswalt to the rescue. 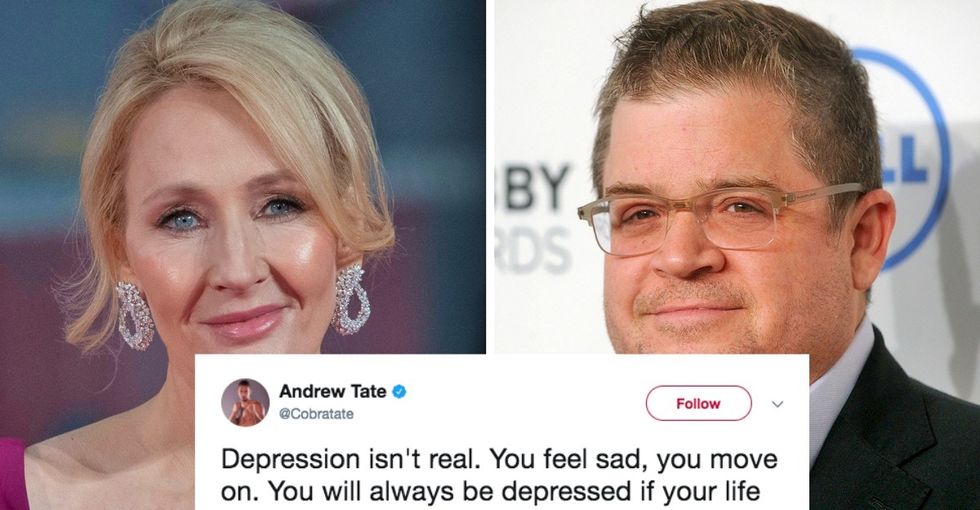 "You feel sad, you move on," he wrote to his 26,000 fans and followers. "You will always be depressed if your life is depressing."

Andrew Tate is not a medical doctor, mental health professional, nor expert in any related field that would add weight to his (seemingly unsolicited) opinion on the subject. Yet, in a combative 13-part Twitter thread, the athlete argued his assertion is correct because he believes that people living with depression are simply "lazy" and will find any excuse to "absolve responsibilities" to feel better.

As is typically the case when you're a well-known person spouting falsehoods on an important subject online, people reacted — and fast.

@Cobratate What the hell is wrong with you @Cobratate this is the kind of *dangerous* garbage that stops people getting the help they need.
— Vikas Shah MBE (@Vikas Shah MBE)1504870257.0

J.K. Rowling — who has butted heads with Tate on Twitter before — suggested the boxer's tweets say more about his own mental well-being than about the science behind depression.

This thread will teach you a lot about the defence mechanism of projection, but zero about the real mental illness… https://t.co/VOEqffOs1R
— J.K. Rowling (@J.K. Rowling)1504855847.0

Comedian Patton Oswalt, who lives with depression, blasted Tate's initial tweet as "false," claiming it reads more like an "energy drink tagline" than anything else.

@Cobratate Hi, I've never heard of you until tonight, but instead of being angry about your tweet, I'm just going t… https://t.co/DcYKAku2NK
— Josh Peterson (@Josh Peterson)1504858884.0

@Cobratate In America, suicide is the 10th leading cause of death. More people die by suicide than from homicide: https://t.co/sl0gl7wDwN
— Josh Peterson (@Josh Peterson)1504858991.0

@Cobratate I hope that when you are suffering and in need that people are kinder to you than you have been to them
— Josh Peterson (@Josh Peterson)1504860227.0

(You can check out the full list of Peterson's helpful links here.)

Tate shared his unfortunate tweet thread just a couple days before World Suicide Prevention Day, so what better time to follow Peterson's lead here and revisit the facts on what depression is and isn't?

Or, as the Cleveland Clinic puts it: "[Depression] is a medical problem, not a personal weakness." We'd never tell someone with cancer to simply think themselves into healing — why would we do so when it comes to depression?

Research shows a combination of faulty mood regulation by the brain, stressful life events, and genetics (among other factors) can all play a role in causing depression, Harvard Medical School emphasized. Contrary to Tate's assumptions, science has shown us that it's not a fleeting emotion; it's a real medical condition, and there's no real "cure" for it.

The good news is, seeking treatment does help millions of people manage and live happy lives, even with depression.

Many people routinely see therapists, use medications, and prioritize stress-relieving habits (like exercising or getting adequate sleep) that help them stay on top of their mental health.

If you're struggling, know that you're not alone. According to the U.S. Centers for Disease Control and Prevention, depression is a relatively common disorder: about 1 in every 6 American adults will experience depression at some point in their lives. Millions of people can relate to what you're going through, and many of them are ready to step in and help.

Treatments for mental illness like therapies or medicines (or a combination both) are lifesavers. If you want help, call the National Suicide Prevention Lifeline at 800-273-8255 or visit the American Psychological Association to learn more.